Left, a Currier print of the wreck of the Mexico.

Lynbrook, N.Y. (First publish 11/23/10) -- The immigrant voyage of millions of Irish to America was legendary for its trials. But perhaps none who ventured out into the Atlantic had as perilous and tragic a journey as the 100 or so Irish men, women and children who set forth in October 1836 on the barque Mexico and the ship Bristol.

Little remembered today, the wrecks of these two vessels, with the loss of 215 lives off Long Island’s South Shore, shocked all who heard or read of them, and made for spectacular headlines for months to come. Taken together, the wrecks were among the deadliest maritime accidents in U.S. history to that time.

Most of the victims on the Bristol drowned after a rogue wave washed over the deck and below decks, as the ship remained stuck about 400 yards offshore. The Mexico’s casualties, including 36 women and 22 passengers below the age of 11, froze to death while waiting on the deck for a rescue effort that never came.

Their fates augured wholesale change in the government’s laissez-faire neglect of the maritime industry, with measures better insuring safer travel along the Atlantic seaboard, including tasking federal revenue cutters, which evolved into the Coast Guard, with sea rescues.

The avoidable deaths of so many so close to land, perishing so wretchedly, gripped the nation’s imagination. Even poet Walt Whitman, 17 at the time and living on Long Island, later vividly wrote about the event, most notably in his poem, “The Sleepers,” from “Leaves of Grass.”

For the past three years, the ships’ ill-fated passages have been the subject of an annual commemoration, held the Friday before Thanksgiving, sponsored by two local groups -- the Gaelic Society of the Parish of St. Agnes Cathedral and The Historical Society of East Rockaway and Lynbrook.

Members of the groups gather at Rockville Cemetery, at the Mariners Burial Ground and its monument, unveiled in 1840 to commemorate the wrecks’ victims. The plot’s marble obelisk was funded through donations from local farmers and baymen, and from money salvaged from the dead who lacked next of kin to claim their remains.

This year’s 15-minute service drew Lynbrook village historian Arthur S. Mattson and 10 others. During the rites, Mattson read from the casualty list of the Mexico, from his new book, titled “Water and Ice: The Tragic Wrecks of the Bristol and Mexico on the South Shore of Long Island” (Lynbrook Historical Books, 2010, 288 pages, illustrated).

The compendium read like an Irish directory, with 54 of the 115 dead having originated in Ireland, bearing surnames such as Barrett, Brennan, Burns, Devine, Dwyer, Dolan, Higgins and so on.

Mattson talked, in particular, about five young women from County Cavan aboard the Mexico “who died taking such a gamble to get to America.” The five women from Cavan, Margaret Barrett, 25; Bridget Devine, 20; Catharine Galligan, 25; Mary Smith, 25; and Eleanor Tierney, 18, were among 10 from the county on the ship, along with seven passengers from Cork and seven from Dublin. Thirty other passengers described their homelands simply as Ireland when arranging for their passages.

Records from the Bristol are spottier, but revealingly 18 of the 19 steerage passengers who survived the Bristol’s wreck were Irish, from among the 68 traveling steerage. These included John Carr, from Kildare; William Dairy, a laborer from Derry, along with his wife or sister Elizabeth; Richard Faulkner and Peter Markey from County Louth; John Finnigan, a wheelwright, and Michael McGintry, from Dublin; James Gaffney, from Cavan; Patrick and Thomas O’Mealy, and Michael and Catharine Mooney, from Offaly; three members of the Warren family from Wicklow; and a deaf mute from Derry, known only as Michael, 40 years of age. 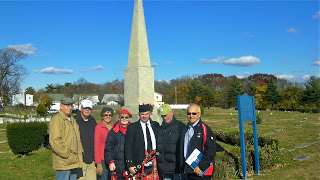 Closing the ceremony, bagpiper Joe Beyrer, a Rockville Centre resident and Lynbrook middle-school teacher, played a medley comprising “Amazing Grace,” “Going Home,” and finally “The Bristol” (named for the English city, not the ship). Wrote Mattson later, in an article for the local newspaper: “It felt as if his music penetrated the earth to the remains of those young girls, and flew to heaven.”

Speculation arose during conversations after the ceremony: Did the 10 emigrants from Cavan hail from the same townland, perhaps driven from their tenant holdings by a hardscrabble economy or a mercenary landlord? Mattson expressed a desire to learn more about the circumstances of these 10, noting he never before considered that they may have traveled from their homes together.

Mattson takes pains in his book to create the context for their exodus. Citing research by Arthur Gribben (“The Great Famine and the Irish Diaspora in America,” 1999) and Stanley Johnson (“History of Emigration,” 1913), Mattson, in “Water and Ice,” points to what Irish peasants faced by 1836 – elimination of home-based work by a depression a decade earlier, the advent of factories, periods of localized potato blight, and a dramatic rise in population.

After the ceremony Mattson wrote: “We all – Catholics, Protestants, and anyone else – bowed our heads as the ‘Hail Mary’ and ‘Our Father’ were said. There is no doubt in my mind that many of the girls lying nearby prayed the identical prayers that we were saying, as they stood on the deck of their wrecked ship in zero-degree weather just 200 yards off Long Beach – and slowly froze to death in sight of the land of their dreams, America.

“As the son of immigrants, I am thankful for brave people like these, the risk takers, who made America what she is today.”

FRONT AND CENTER: Those present at the ceremony included Bill Carroll and Debbie Wynne, who co-founded the Gaelic Society at St. Agnes Cathedral in 1982; Bob Sympson from The Historical Society of East Rockaway and Lynbrook; Patricia McGivern, a member of both organizations; and John Raphael, president of the Gaelic Society. (Contact John Raphael, at 516-678-1008, for more information about the Gaelic Society, which will host a Mass at the Cathedral, Saturday, Dec. 5, in honor of deceased members.)

THE CRUEL FATES OF THE BRISTOL AND MEXICO 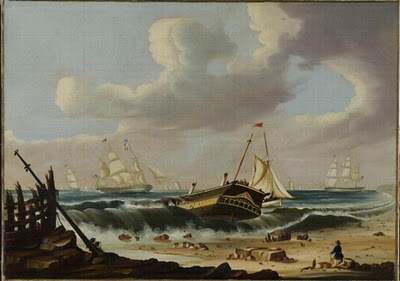 The Bristol departed The Prince’s Dock, in Liverpool, on Oct. 15, eight days before the Mexico and foundered off the beach of Far Rockaway, Nov. 21, 1836, with the loss of 100 -- 95 of 127 passengers and 5 of 17 crew members. The ship had been waiting since dark for a pilot to arrive to guide them through the Narrows, but the New York pilots, who then had a monopoly and little regulation, ignored the captain’s signaling, preferring to keep the Sabbath.

Later that evening, a storm, strong currents and a crewman’s error drove the Bristol toward Rockaway Shoals. With the ship grounded, pounding seas destroyed the ship’s two lifeboats. Soon, a rogue wave washed over the Bristol, stripping the ship’s hatches. Subsequent waves surged below decks, trapping 49 of 68 steerage passengers, and the rising water level took their lives. Many passengers in the more-costly quarters also drowned.

The Mexico, meanwhile, had a much more difficult crossing, encountering nearly constant storms and pummeling seas, and took 71 days, twice as long as the Bristol, to reach New York. Arriving New Year’s Eve, Captain Charles Winslow signaled for a pilot’s assistance to get to a berth in Manhattan.

Tragically, callously, the pilots had adjourned to a Manhattan saloon to ring in the New Year, according to local historian Arthur S. Mattson. Winslow tried to keep the ship away from the treacherous shorelines while he waited for a pilot to finally respond to his signals, but currents, a navigation error, and a storm carried his ship to the Long Beach shore.

As well, the Mexico was overloaded, with a cargo of iron bars and coal, which added to the difficulties facing its crew during the crossing and in keeping from the shoals. In fact, the ship’s 111 passengers were, in the eyes of the ship’s owners, merely a commodity, occupying a cargo deck leased to a passenger broker.

The crew of the Mexico, weakened by the punishing waves, frigid temperatures, and weeks of battling high winds and flailing seas, and hampered by temperatures of 3 degrees Fahrenheit, lost both lifeboats in launch attempts. Not till 3 p.m., four hours later, did a rescue boat reach the Mexico, led by 51-year-old local wreck-master Raynor “Rock” Smith, who ignored the perils the waters posed to his long boat and six-man crew.

Smith’s boat had been pulled as much as eight miles by a horse or team of horses across land and frozen bays and inlets to reach the beach. He and his men took in eight survivors, including Winslow, four other crewmembers, and three passengers who had volunteered to help crew the ship. The remaining 108, severely famished, terrified passengers were left behind. 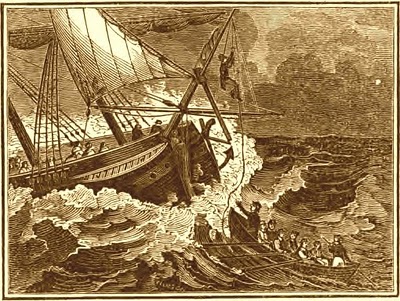 Those remaining could only hope that the boat, or others like it, would return. Day turned to night, though, as Smith and his crew, and other would-be rescuers refused to risk another trip to the Mexico as the seas churned unabated.

A correspondent for the Morning Courier and New York Express described the aftermath: “When (passengers) perceived that no further help came from the land, their piercing shrieks were distinctly heard at a considerable distance, and continued through the night until they one by one perished. The next morning the bodies of the many unhappy creatures were seen lashed to different parts of the wreck, embedded in ice.” -- Ger