Back in the mists of time, long before the Milesians arrived from Egypt, and even longer before the Celtic tribes came and settled, another ancient tribe inhabited the island of Ireland. The ‘Tuatha De Dannan,’ translated as ‘people of the Goddess Danu,’ were a supernatural race who came to Ireland with the intention of removing the evil Fomorians, a race that already inhabited the island and who caused widespread destruction and mayhem. The ‘Tuatha’ were divided into three tribes: the tribe of ‘Tuatha,’ the nobility: the tribe of ‘De,’ the priests, and the tribe of ‘Danann,’ the bards, storytellers and minstrels. Their patriarch, the Dagda, associated with fertility, agriculture, magic, druidry and wisdom, had a daughter called Brigid. Like her father, Brigid was also associated with the spring season, fertility, healing, poetry and smith craft. 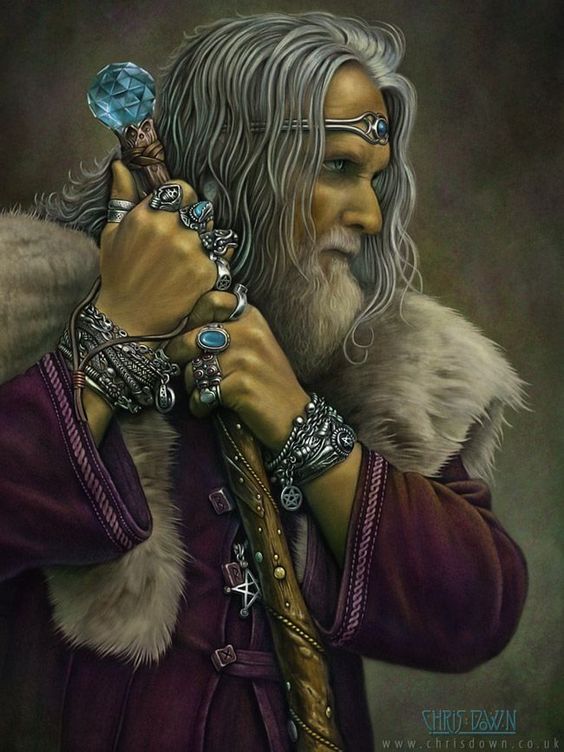 A Feis (gathering) was originally convened by her father, the Dagda, to celebrate the day of Brigid’s birth, which coincided with the first day of spring. Known as ‘Imbolc,’ it was a time of feasting and celebration and has been observed annually since then, in her honor. Imbolc has traditionally been celebrated on 1 February but because the day was deemed to begin and end at sunset, the celebrations would start on 31 January. It has also been argued that the timing of the festival was originally more fluid and based on seasonal changes. It has been associated with the onset of the lambing season, which could vary by as much as two weeks before or after 1 February, and with the blooming of the revered blackthorn trees.

The Feis was a festival of the hearth and home, and a celebration of the lengthening days and the early signs of spring. Celebrations often involved hearth fires, special foods, divination and watching for omens. Torches and bonfires were lit as fire and purification were an important part of the festival. The lighting of torches and fires represented the return of warmth and the increasing power of the Sun over the coming months. Through time, Brigid came to be revered as the goddess of all things of high dimension, such as rising flames, highlands, hill-forts and upland areas, and of activities and states conceived as psychologically lofty and elevated, such as wisdom, excellence, perfection, high intelligence, poetic eloquence, craftsmanship, healing ability, druidic knowledge and skill in warfare. In 453 AD, a daughter was born at Faughart in County Louth, to Dubhthach, a pagan Chieftain of Leinster and one of his servants, a girl called Brocca. Brocca was a Pict and former slave who had been converted to a new religion sweeping the country, by a man called Patricius. The newborn, despite being born into slavery, from an early age exhibited signs of a kind and charitable nature. When Dubhthach's wife discovered Brocca was pregnant, she was sold to a Druid landowner. When she was about ten-years-old, Brigid, as she was named, returned to her father's home, as he was her legal master. According to one tale, as a child, she once gave away her mother's entire store of butter to hungry people in the area. Another story tells of how she gave some of her father’s belongings to many of the less fortunate, such was her caring nature.

Eventually, Dubhthach became tired of Bridget’s giving nature and took her to the king of Leinster, with the intention of selling her. As he spoke to the king, Brigid gave his jeweled sword to a beggar, so he could barter it for food for his family. When the king, who was a Christian, saw this, he recognized her kindness and convinced Dubhthach to grant her freedom by saying, "her merit before God is greater than ours." After being freed, Brigid returned to the Druid and her mother, who was in charge of the Druid's dairy. Brigid took over as dairy maid and often gave away milk, but the dairy prospered despite the charitable practice, and the Druid eventually freed Brocca. Brigid then returned to Dubhthach, who, in her absence, had arranged for her to marry a bard, but she refused and made a vow to always be chaste. Many stories of Brigid's purity followed her childhood and she was unable to keep from feeding the poor and healing them. Legend has it Brigid prayed that her beauty be taken so no one would want to marry her, and the prayer was granted. It was not until after she made her final vows that her beauty was restored. Little is known about Brigid's life after she entered the Church, but it is accepted that she founded a monastery in Kildare, called the ‘Church of the Oak.’ It was built above a pagan shrine to the Celtic goddess Brigid, which was sited beneath a large oak tree. Brigid and seven friends organized communal consecrated religious life for women in Ireland and she founded two monastic institutions, one for men and one for women. Brigid invited a hermit called Conleth to help her in Kildare as a spiritual pastor and to govern the church along with herself. She later founded a school of art that included metalwork and illumination, which Conleth led as well. It was at this school that the Book of Kildare, which the historian Gerald of Wales praised as "the work of angelic, and not human skill," was beautifully illuminated, but sadly, was lost three centuries ago.

The presence of the Brigid's cross in Ireland is far older than Christianity and dates to the time of the goddess Brigid. It was a three-armed, pagan symbol made from rushes and used to protect a home from fire. It was also hung above byre and stable doors as a protection for the animals. The Christian Brigid and her four-armed cross are linked together by a story about her weaving this form of cross at the death bed of a pagan chieftain from a neighborhood in Kildare. Christians in his household sent for Brigid to talk to him about Christ and when she arrived, the chieftain was in a state of incoherence and raving. As it was impossible to instruct the delirious man, hopes for his conversion seemed doubtful, but nevertheless, Brigid sat down at his bedside and began consoling him. As was customary, the dirt floor was strewn with rushes both for warmth and cleanliness and Brigid stooped down, gathered a handful and started to weave them into a cross, fastening the points together. The sick man asked what she was doing, and she began to explain the meaning of the cross. As she talked, his delirium quieted, and he questioned her with growing interest. Through her gentle persuasion and intricate weaving, he converted and was baptized at the point of death. Since then, the four-armed cross, made of rushes, has existed in Ireland. Today, Brigid is associated with perpetual, sacred flames, such as the one maintained by 19 nuns at her sanctuary in Kildare, Ireland. The sacred flame at Kildare was said by Giraldus Cambrensis and other chroniclers, to have been surrounded by a hedge, which no man could cross. Men who attempted to cross the hedge were said to have been cursed to go insane, die or be crippled. Both the goddess and saint are also associated with holy wells, at Kildare and many other sites in the Celtic lands.

On St. Brigids eve it was generally believed that the saint traveled around the countryside, bestowing blessings on the people and livestock. A common practice entailed the placing of a cake or pieces of bread and butter on the window-sill outside.

Often a sheaf of corn was placed beside the cake as a refreshment for the saint’s favourite cow who accompanied her.

Other households placed a bundle of straw or fresh rushes on the threshold on which the saint may kneel to bless the house or on which she could wipe her feet before entering.

Further traditions include that dishes of water, salt, pieces of meat or butter being left outdoors as an offering for the saint, after she had passed by these would have acquired medicinal properties and were used to ward off illness.

Another custom is to leave a cloth or scarf outside to be blessed by the saint as she passes. Known as a 'Bratog Bride' in Irish folklore, this special garment can then be used as a cure for headaches or sore throats. 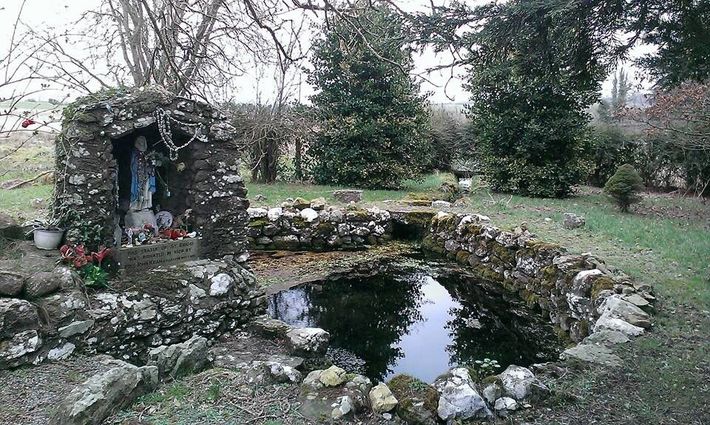 There is evidence that Brigid was a good friend of Saint Patrick's and that the ‘Trias Thaumaturga,’a hagiography of the Irish saints claimed, "between St. Patrick and Brigid, the pillars of the Irish people, there was so great a friendship of charity that they had but one heart and one mind. Through him and through her Christ performed many great works." Brigid helped many people in her lifetime, and on February 1, 525 AD, she passed away of natural causes. Her body was initially kept to the right of the high altar of Kildare Cathedral, in a tomb "adorned with gems, precious stones and crowns of gold and silver." In 878 AD, during the Viking raids, her relics were moved to the tomb of Patrick and Columcille for safety. 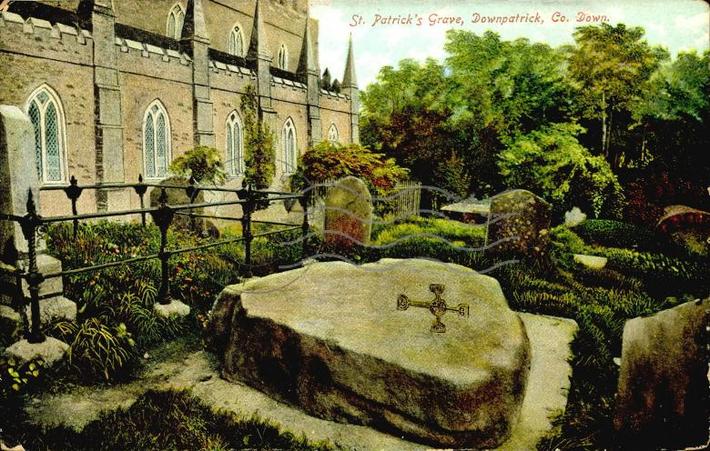 Another site with which both Brigid the Saint and Brigit the Goddess are associated, is at the Hill of Uisneach. According to tradition, St Brigid received the veil there at the sacred and mythical centre of Ireland, with some texts saying that it was St Patrick who bestowed it upon her. There are a number of holy wells and churches in the area that are associated with St Brigid. Located at the western base of the Hill of Uisneach lies the peaceful tranquility of St Brigid’s Well, an ancient site that may have been a place of ritual long before the coming of Christianity to Ireland. Even today one can visit the well and see this beautiful space is celebrated by all.

Today, all three lie at rest together in the graveyard of Saul Church near Downpatrick Cathedral in Co. Down, the site of the first church built by Patrick in Ireland.

I was reading the first part of the story today.I came here to find if the wild Geese fought at Culloden but no luck.So I scrolled down the two Brigids and read the end of the story.It was great to know some women held revered positions in the Chuch at this early stage .thank you for the story.

Thanks for reading Rosie.

Hey John Anthony splendid article, well written and full of interesting, heart warming history. I will be sure to revisit this piece around St. Patrick's Day too that I may know there's much more to March 17th than green bagels and beer. (Ha.) Looking forward to your next work. God bless and Godspeed.

Thanks for reading Daniel. It is a deeper story that we've been led to believe. Watch this space...LOL