How to Remember 1916 Without Glorifying Violence?

The rebellion of Easter Week 1916 was one of the formative events in Irish history.

Those who initiated the Rising did so with high idealism, bravery, and self sacrifice.

It was, however, a violent action, involving loss of life, and was, as would have been anticipated by its initiators, violently suppressed with further loss of life.

As we have worked painstakingly over many years to remove violence from Irish politics, we must do our best now to commemorate 1916 in a way that does not glorify violence.

It is argued by many that the form and content of the 1966 commemoration romanticized violence and contributed negatively to inter community relations on the island generally, and particularly in Northern Ireland. But how can one remember 1916, without glorifying the methods used in the conflict?

REMEMBER ALL WHO WERE KILLED, NO MATTER WHAT SIDE THEY WERE ON

My proposal would be that, as part of the overall commemoration, all who died violently in Ireland in and around Easter week 1916, be remembered individually, and by name.

Naturally, a major focus should be on the Volunteers who died, and on the executed leaders.

This approach would put a focus on the cost of violence, the loss of life and the suffering, as well as the bereavement suffered by relatives left behind.

All the above casualties would have had relatives who mourned them, and it would be good, a century later, to remember them all. From a religious and ethical perspective, all these lives, taken away in 1916, were equally valued and valuable. 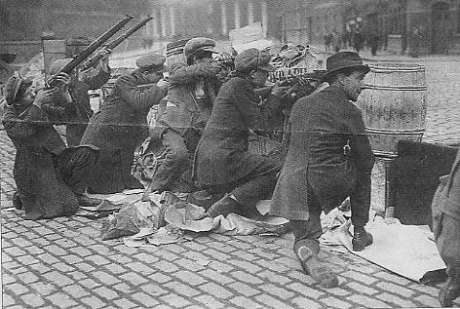 Apart from these considerations, it is worth saying that the families of the DMP, RIC, and Army casualties, who continued to live in Ireland, may have felt that the loss they suffered, was in some sense less recognised by their fellow Irish people, because of a perception that they had died on the “wrong side”. A century later, that can be rebalanced a little.

It may pose practical difficulties, but it would be good if that the state should invite a family member of every casualty to a Commemoration, perhaps on the inclusive model of the National Day of Commemoration. With all the data now available, tracing some of these relatives would not be as difficult as it might have been 20 years ago. I know that there will be a military element to the commemoration during Easter Week, and it might be perceived that a commemoration on the same day focussing on all the victims, would take from that.

So perhaps this could be done on another day, perhaps a week or two later, which might be appropriate anyway, given that some of the victims on all sides, who died of their wounds, would not have done so until sometime after Easter Week itself was over.

A WELCOME INITIATIVE BY THE GOVERNMENT

I recently learned from the Taoiseach, Enda Kenny, that the Government is already moving in this direction.

A Commemorative Wall is to be erected in Glasnevin Cemetery bearing the name of all who died in the 1916 Rebellion, regardless of the side they were on, or of whether they were killed accidentally or deliberately. The names of the 1916 victims will be inscribed on the Wall in 2016, and, in the centenary year of their deaths, those who were killed in the War of Independence and the Civil War will be added.

The Wall will remind future generations of the true price of warfare. 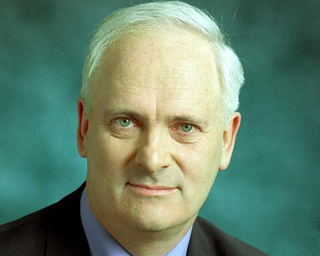 John Bruton, a former Teachta Dála in Ireland’s Dáil Éireann, served as the nation’s Taoiseach (Prime Minister) from 1994 to 1997, and as Ambassador of the European Union to the United States from 2004 to 2007.  He is currently President of IFSC Ireland.  A graduate of University College Dublin, with degrees in economics and law, he is a passionate student of history.  John has graciously agreed to write book reviews on occasion for The Wild Geese. You can get more of John's perspectives on Irish -- and world -- affairs at www.JohnBruton.com.

We should have done that for our bi-centennial celebrations, nothing says revolution like a politically correct revolution! Slainte !

Yes, and sang "God Bless the Queen" right after 'The Star-Spangled Banner' NOT. Call me old-fashioned, I guess. But can't we hate the sin of oppression and thus not salute the unapologetic oppressor's descendants.

What other country commemorates its former enemies in the way that Bruton, and apparently Enda Kenny, are proposing? Do the Americans honour the Japanese pilots who attacked Pearl Harbor? Is there a commemorative wall in the East End of London inscribed with the names of the gallant Luftwaffe pilots who turned that area of the city into a pile of rubble during the blitz of the 1940-41?
Why should Ireland honour the armed forces of a country that had no hesitation in using artillery and heavy machine guns in the heart of a densly populated city. Why should we honour the soldiers who had no moral scruples about murdering unarmed civilians in the North King Street area, or who shot down Francis Sheehy Skeffington in cold blood? Wouldn't that be similar to asking the Americans to commemorate those responsible for the malmedy massacre, or asking the British to commemorate those guilty of the Wormhoudt massacre of British POWs in 1940?
Some may argue that the DMP and RIC were Irish and were not members of the British military and so it is acceptable to honour them, but the members of those organisations were the eyes and ears of Dublin Castle and had played a leading role in the suppression of the Irish nationalist population. These were the same thugs who had gleefully used their truncheons to smash the living daylights out of their fellow Irish men and women during the Dublin lockout, and they were the same thugs who had actively participated in the eviction of millions of their fellow Irish without care or thought as to whether or not those people could feed, or fend for themselves. As far as I'm concerned the RIC and the DMP rank alongside the Stasi and the Securitate. Do the Germans and Romanians have inscribed walls honouring deceased members of those police forces?

News Flash !  Adolph Hitler will be honored for decreasing the world population thus decreasing our carbon footprint and limiting global warming. OK fellas who else can we give recognition too for their impact on history. Remember everybody gets a trophy and we don't keep score in games, don't want anybody to feel poorly about themselves. False image molding is the new feel good drug of the masses. Where is the nearest Pub ???

If we are no longer permitted to glorify violence can we expect to see Burton and Kenny propose a new national anthem to replace The Soldier's Song, a song which not only inappropriately refers to fighting against our benevolent Saxon neighbours but which was also sung by those homicidal maniac rebels in the GPO itself. Perhaps we can get Johnny Logan, or Dana, to write a nice, inoffensive ballad instead?

Bruton the Brit is at it again.  First the patriots of 1916 were misguided and mistaken.  Then, Home Rule which would  have made Ireland a docile colony of the Crown should have been pursued.  Now the lackeys and troops of the aggressor should have their names memorialized on an Irish monument.  Perhaps we should list them under Cromwell and Henry VIII.  How is it that Bruton never asked to memorialize the Irish who perished in the Great Hunger or in the many Risings against the oppressor from 1798 on.  Logic dictates that since nowhere on earth has any society ever honored their aggressor who has decimated their ancestors, family and friends, this suggestion should be treated with the scorn and contempt that it deserves.

Guys, I understand the anger, but let's endeavor to shed light, and less heat. Reasonable people can disagree, but I like to include John's point of view, even though I often disagree. Keeping things civil will help insure John will allow us to share these views here on WG.

Gerry I accept what you write but this does not shed any light only confusion . Mr Bruton suggests that"This approach would put a focus on the cost of violence, the loss of life and the suffering, as well as the bereavement suffered by relatives left behind.". What about earning the eventual right to self determination as a country - is that not a benefit {even for 26 counties } ? I am disgusted and annoyed by this post but not surprised by Mr Bruton . I am sure if given the unlikely opportunity  he wouldn't say those words to Michael Collins or anyone else involved in that period !.

Gerry your right, the mark of an educated mind is the ability to discuss an issue without having to accept it.  I read the article and choose not to accept it's argument. Just as the men and women made their choice in 1916 as to what side they would take. Some made the ultimate sacrifice for their choice, and the winner (or children) write their story. All wars hurt families years and years after the last shot was fired, but if we try to make them too pleasant a memory might we make war more acceptable?? Jakkers, another point for us to ponder ;-)  Slainte !

While I personally don't like what he is suggesting, I have to say that America already did precisely the same thing after the American civil war when Confederates were allowed to put up 100's of memorials to their war dead on battlefields all over the South. I find Confederate memorials as offensive as I would those to the Black and Tans and I'm sure descendants of dead Black and Tans would find the Irish Republican monuments that I'm so proud of offensive. But what are you going to do? Everyone wants to feel that their ancestors were right, just and noble. Certainly the British regime in Ireland, as bad and as fascist as it was, wasn't advocating the same chattel slavery that we find glorified in Confederate monuments. So if we as Americans approve of the one, why not the other? And honest to God I can't believe I'm saying this because I don't like it! lol