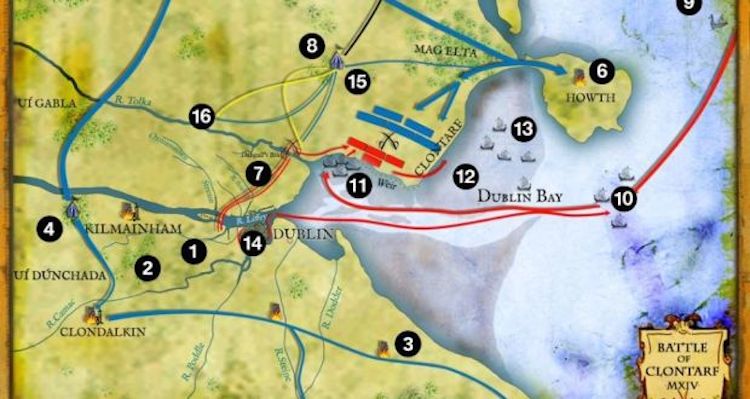 April 23, 2014 will mark the 1,000th anniversary of the Battle of Clontarf. The battle was fought between the forces of Brian Boru and the forces led by the King of Leinster, Máel Mórda mac Murchada: composed mainly of his own men, Viking mercenaries from Dublin and the Orkney Islands led by his cousin Sigtrygg, as well as the one rebellious king from the province of Ulster. It ended in a rout of the Máel Mórda's forces, along with the death of Brian, who was killed by a few Norsemen who were fleeing the battle and stumbled upon his tent. After the battle, Ireland returned to a fractious status quo between the many small, separate kingdoms that had existed for some time.

Have a look at this map (created by our very own Tomás Ó Brógáin) at the Irish Times' website to see how the battle unfolded a millennium ago.

I also wanted to include this good video about the Battle of Clontarf:

Learn more about Brian Boru and the Battle of Clontarf

Congratulations to you and Thomas O'Brogain for this article, video and map.

... and not a word about our own Tadhg Mor Ó Ceallaigh who "died fighting like a wolf dog"