It is impossible to write the history of nineteenth century American politics without noting the overwhelming presence of the Irish in the affairs of state. In part this was due to mere numbers - in 1850, 43% of the immigrant population was Irish, and no politician could afford to ignore such a massive voting bloc. In part it was due to the fact that many Irish immigrants, still angry at the circumstances that had landed them in the U.S. in the first place - were inclined to politics, and to the Democratic party especially, which proclaimed itself the friend of the working man and the downtrodden.

Irish immigrants had an advantage over other Europeans: they could already speak English, and so assimilated far quicker than Germans, Italians, Poles and Jews. By the middle of the nineteenth century New York’s Tammany Hall had become so associated with the Irish Democratic machine that it was easy to forget that it had been originally founded by the old guard WASP establishment. For decades membership was restricted to “native-born patriots.” In 1817 a mob of Irish immigrants stormed Tammany Hall in protest of its bigotry, swinging sticks and hurling brickbats. Eventually, the Democratic fathers decided it would be simpler to relax its anti-immigration stance and let the Irish join. Eventually they took it over, and soon Tammany Hall and the Irish were synonymous. One Irishman, however, stood out from this scene. Dan Bradley abhorred Tammany Hall and everything it had come to stand for - machine politics, political bosses, and graft.

He was from the “Soft” anti-slavery, liberal side of the Democrats, and when he was elected to the New York State Assembly in 1874 it was noted that his only real rival in Albany was the “Hard” John J. Vanderbilt, and the contrast between the two was stark. Vanderbilt, sire of the Dutch Protestant ascendancy, was “one of the finest looking men in the State of New York, a man of high culture, of commanding presence,” while Irish Catholic immigrant Bradley was “a plain unlettered man.” He soon gained a reputation, however, for his high moral stance and honesty. Once, seeing cheques from building contractors lying openly on other Assemblymen’s desks, “Honest Dan” seized them and tore them up.

Dan Bradley was born in Derry on St. Patrick’s Day, 1833. In 1849 he and his parents emigrated. The family settled in Brooklyn, where Bradley worked in a tobacconist’s shop. In later life, he would often be mistaken for a priest because he wore semi-clerical clothing with a reverse collar. Throughout his life he remained a devout Catholic and had close ties to several Brooklyn Catholic charities.

He was elected to the New York State Senate in 1893. One of his first bills there was a proposal to fix the Senate salary to one thousand dollars. This was an unpopular idea among his colleagues - most of them were on the take in form or another. “The man who takes more pay than he agreed to accept office for is something more than a salary grabber - he is a thief!” 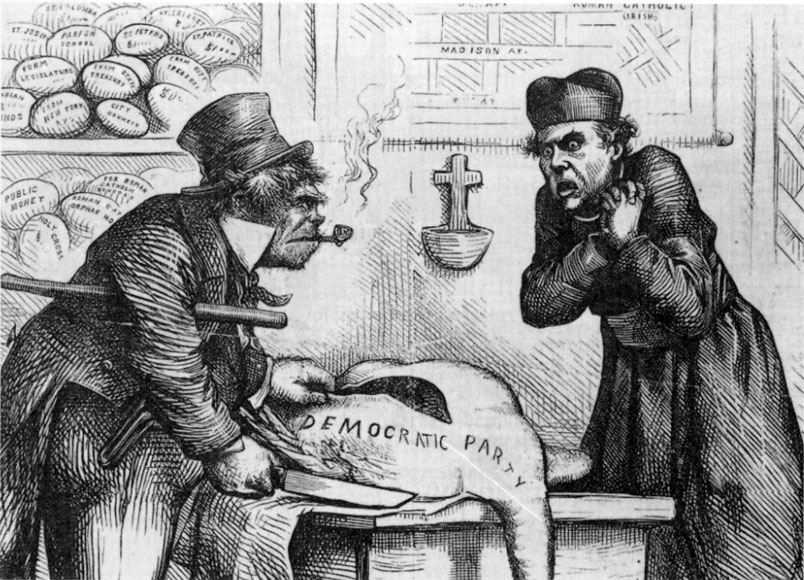 In 1894 he resolved to root out corruption in the New York Police Department, which at the time was scandal-ridden with tales of brutality, voter fraud and the illegal sale of liquor licenses. Most of the police officers involved were of course of Irish descent, but Bradley distinguished between “good” and “bad” Irish cops (teatotallers and drinkers). When the Democratic Tammany machine attempted to stop his investigation, Bradley ignored them, declaring that “not one of the big officers will be allowed to escape the probe.” In the end, the investigation’s report ran to 58,000 pages and 3,000 subpoenas were served.

He lived out the rest of his life in Brooklyn and died in 1908.

Fascinating little piece, Niall.  Thanks for sharing it.

Terry Golway has an op-ed in yesterdays New York Times about Tammany Hall that presents the two sides of the Tammany coin. It is an interesting read: http://www.nytimes.com/2014/01/18/opinion/the-forgotten-virtues-of-...