History of Passports and a Useful Genealogical Tool 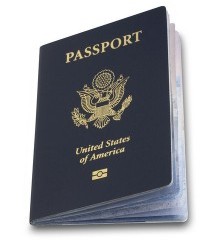 Except for brief periods during and after times of war, passports were not required of U.S. citizens traveling outside of the country until 1941. Many Americans, however, obtained one for their own security. Passports were and still are issued by the Department of the State, and those issued from 1791 to 1925 have been transferred to the National Archives.

Early passports contained little information, but from 1906 they contained the name of the applicant, date and place of birth, name, date and place of birth and spouse or children, residence and occupation at time of application, immediate travel plans, physical description and a photograph. Applications of naturalized citizens included information of their immigration, plus the date and port of arrival, name of ship, and date and court of naturalization. For copies of applications after 1925, one can write the Passport office and the department of State in Washington, D.C. It is a very valuable genealogical tool.

One of the earliest known references to paperwork that served in a role similar to that of a passport is found in the Hebrew Bible. Nehemiah 2:7-9, dating from approximately 450 BC, states that Nehemiah, an official serving King Artaxerxes I of Persia, asked permission to travel to Judea; the king granted leave and gave him a letter "to the governors beyond the river" requesting safe passage for him as he traveled through their lands.

In the medieval Islamic Caliphate, a form of passport was the bara'a, a receipt for taxes paid. Only citizens who paid their zakah (for Muslims) or jizya (for Dhimmis) taxes were permitted to travel to different regions of the Caliphate, thus the bara'a receipt was a "traveler's basic passport."

King Henry V of England is credited with having invented what some consider the first true passport, as a means of helping his subjects prove who they were in foreign lands. The earliest reference to these documents is found in a 1414 Act of Parliament. In 1540, granting travel documents in England became a role of the Privy Council of England, and it was around this time that the term "passport" was used.