Her Name Is Sheela, and She Commands Your Attention 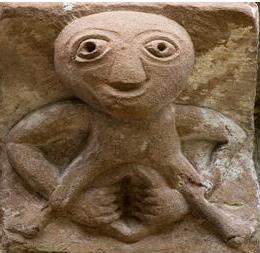 Strutting their genitalia, Sheela-na-Gigs remain a provocative presence in ancient Irish churches. Part 2 of the 3-part series ‘When The Goddess Ruled’

Part 1: The Mists of Time
Part 2: Her Name is Sheela
Part 3: Brigit: The Goddess who became a woman, who became a saint,...

Dawn breaks over the Burren and the sun reveals her ancient form over the door of the ruined church at Kilnaboy.  She is still here and always has been, ever since the dawn of time.  Who is she?  Her name is Sheela and she belongs to Ireland.

She is small and hideously ugly and shockingly obscene.  She has been ignored and hidden away, often in plain sight.  But, she is an important part of Irish history that held powerful meaning and is making a comeback for modern women.  She is Sheela-na-Gig.

Perhaps you have never met her.  Sheela is an ancient stone relief figure of a nude female with splayed legs, openly exhibiting her genitals.  We have no idea what she meant, where she came from, or how she functioned.  We can only speculate about her origin.  In fact, we have no idea when these female figures first burst from the Celtic imagination.  Scholars and archaeologists have been trying to guess her age, but she is not telling.  Oddly, she is usually found in or on Christian churches or monasteries.  Although her numbers are overwhelming in Ireland, there are also a few examples scattered in Britain, Wales, Scotland and France and some distant cousins on the Continent.

Nude female Goddess figures have existed for millennia, beginning with the Woman of Laussel (France, 25,000 B.C.E.) and the Venus of Willendorf (Austria, 22,000 B.C.E.).  These figures, and so many like them, were common during the prehistoric era and probably used on home altars.  Guessing from their outrageously pronounced breasts, belly and hips, these plump little mother Goddesses probably helped ensure fertility while others were used in burial rites and found in the megalithic tombs, dolmens, and passage-graves of Ireland dating from 4000 B.C.E.  However, the Sheela-na-Gig stands apart from all the other figures in that she brazenly displays her sexual apparatus for all the world to see, and her size suggests she was neither portable nor for personal use.  So, who was She?

Marija Gimbutas, Merlin Stone and others believe that god was a female prior to the waves of Indo-European invasions that brought in their wakes patriarchal religion and social systems.  The Goddesses were more than mere personal fertility figures, but were great Goddesses of life and death, regeneration, Mother Earth, and the land itself.  She was the womb and the tomb, that from which we all come and that to which we all return.  The Divine Feminine was venerated as the Goddess who took many different forms and embodiments, including the Sheela-na-Gig in Ireland. Left, Sheela-na-Gig at in the National Museum, Dublin (originally at Seir Kieran

The greatest number of Sheelas are found in Ireland with at least 60 still found in place, several in museums (including the National Museum, Dublin), and a few in private collections.  England has 40 Sheelas, while a handful are found in Scotland and Wales.  Ranging from quirky to downright grotesque and scary, these figures are crudely carved and are not high art.  Many have been discovered in restoration projects, in rivers, and while digging graves.

Sheelas have been unearthed in strange locations because they have been rejected as obscene and repulsive or evil and therefore hidden or disposed of.  Since many were located in or on churches or monasteries, embarrassed and prudish clergy have hidden, removed, destroyed or defaced the figures.  Some have been uncovered in the walls of parish churches, but turned inward, meaning that the stone block had been turned around to hide the shame of the Sheela while reusing the block.  It remains unclear whether the sheelas were originally meant to be where they have been found or were they transferred from earlier foundations?  Why would a figure that is clearly from the old Celtic religion be found on Christian churches?  While there are many theories, these questions persist and cannot be answered with any degree of historical certainty.

Sheelas find a home in churches and monasteries

If the Sheela was one embodiment of the Goddess, then she probably had something to do with Kingship rituals.  Irish kings were more than political and military leaders, they also functioned on a sacred and symbolic level ensuring the fertility and productivity of the sacred land and the people.  This sacred role meant that the potential king had to first be approved by the Goddess before being inaugurated.  This was accomplished by enacting a sacred marriage between the candidate and one of the embodiments of the Goddess.  Irish myth records the story of the Goddess appearing to the potential king as an unimaginably ugly old hag and demanding sexual intercourse.  If the candidate was good and wise, he would cooperate and the old hag would turn into a beautiful maiden and he would become king.  However, if he was foolish enough to refuse, he would be rejected.  All of this was fine, until Christianity exerted influence in Ireland. 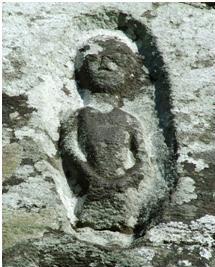 The Christians did not share the sexual liberality of the native Irish and would have strictly disapproved of and condemned these  kingship rituals and sought to banish the Goddess in favor of the Christian male God.  Perhaps the Sheelas were born out of this division between the old and new religions.  If the sacred marriage of kings with the Goddess was banned, then something had to take its place.  Could the Sheela have been a sort of symbolic picture or icon, a much more staid proxy, if you will, of what had once been a physical act?  This is certainly one possibility and means she would have her origins in the transition period after the coming of Christianity to Ireland or between 300 and 800 C.E.  However, this does not explain why she is so often found in or on Christian churches.

Some archeologists believe she was posted in Christian churches and monasteries as a warning against the sin of lust, a sort of picture or stop sign shouting “Don’t even think about it!”  One theory explains that she might actually have been a symbol of Mother Church herself, inviting the worshipper into the womb of the Church from which we are reborn in Baptism and to which we return in death.  Another theory says she was an encouragement and a divine good luck charm for pregnant women.  Amazingly, the tiny Sheela on the ruins of the Abbey Church of St. Gobnait in Ballyvourney is actually called St. Gobnait.

Devotion to the Sheela-na-Gigs remains strong today.  Pregnant women still make their pilgrimage.  People still visit them, touch them, and leave little tokens at their feet.

The rediscovery of sheelas is more than an archeological discovery; it is the re-emergence of the Divine Feminine into human consciousness.  In an increasingly secular world dominated only by one-sided enlightenment rationalism, in a world ravaged and divided by patriarchal power and violence, in religious institutions that have gone so wrong and are interested only in power and control, she offers a different way.

Reclaiming Sheela as a deeply meaningful and positive symbol of the Feminine can help all women reclaim their rightful place in both the spiritual and temporal realms.  She can empower women to reclaim their bodies as good, to reclaim their rightful place in a Church that has excluded and marked them as evil and unclean, and to claim their voices and say “NO” to abuse at home, in the work place, and in the Church.  She can help women reclaim a soulful spirituality of transformation, psychic balance, wholeness, creativity, Wisdom and Feminine Divinity.

She is still here, and Sheela was one of her incarnations.  Her story continues. WG

Copyright © 2012 by Ronnie T. Stout-Kopp and GAR Media LLC. This article may not be resold, reprinted, or redistributed without prior permission from the author. Direct questions about permissions to permissions@garmedia.com.

A colleague and I are currently in the midst of writing a book about more or less this very thing. I'll be giving a talk in Wells, England on 6th April and 2 in Ireland 4th-5th May.

Here are video snippets of a talk I gave in Glastonbury, England last year.

looking sheela, this phrese is really right to her. it's like little universe. thanks

Comment by Jim Curley on April 9, 2013 at 11:26am
There's a delicious irony that these symbols are found on church buildings, given the church's attitude toward both sexuality and women.

I often wonder if the people in Ireland converted Patrick to their home-grown theology as much as he converted them to Christianity.

Whenever I see the ancient symbols carved into stone in houses of Religion, I always smile. I believe it was the carver's way of respecting the roots of that House and thumbing their nose a bit, perhaps, as well

I am sure there was a cross theological effect. I was raised as a Mexican-Celtic Catholic. When asked what that means, I reply that I was raised with the tenants of the Catholic faith and all the trappings. However, I was also raised to honor the roots from which those Catholic rituals grew and formed. I celebrate the Saint days, 8 high days and the Equinoxes with the same attention to prayer and ritual, I visit a curandero or healer and revel in the power of a full moon dance

One of my favorite priests stunned parishoners when, in his very first homily, his first words were "In the name of the Father, Son & Holy Ghost...In the name of the Mother, Maiden, Crone...." Save for three of us...the stunned silence was deafening... Of course, he was also the person who would name a cocker spaniel Saorise ;-)

Having travelled extensively in the Isles and on the Continent, I've run across many relics from days gone by. I still remember seeing small offerings left on stones at ancient holy sites. Old habits die hard.