Have You Ever Played the Old Irish Game of 'Rings'? 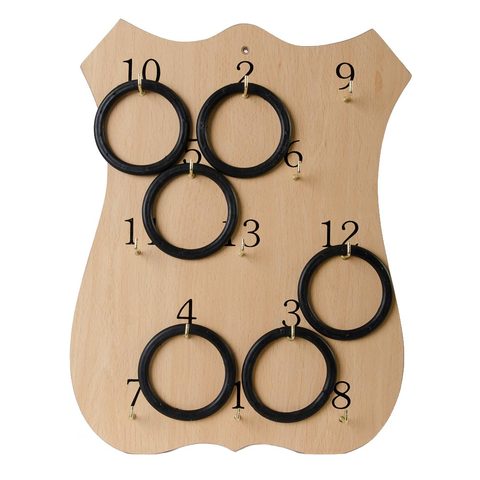 There is a governing body for the game of 'Rings' – World Ring Board Academy - and All-Ireland Championships are still played.  This year's Championships were held recently in the Green Isle Hotel, which is in my hometown of Clondalkin, County Dublin.  So, I was delighted to drop in and see what it was all about.  Over 400 people from around Ireland turned up to play, plus some visitors from overseas.  It was a much bigger event than I had anticipated, with 14 ring boards being played within the venue.  There was a mix of individual and team events.  It was really fantastic to see this game in action.  All ages playing together and against each other, from teenagers to retired people, men and women, experienced and novice.

I met a number of retired people who had played this game as children only to recently take it up again.  It is something for them to play when on their own at home, and also it gives them a new lease of life to meet up with others once a week to play 'Rings.'  Many Irish schools have Ring Boards for children as it helps teach basic arithmetic.  The game of 'Rings' is truely a game for everyone!

Does this Ring board bring back childhood memories?  Whether you played on your own or with family and friends, it was good fun then and it is good fun now!  Let’s keep the Irish traditional game of 'Rings' alive!   It is a brilliant game to have in the house, and great party fun for any gatherings. Small board, suitable for school and home, Traditional Wooden Ring Board,  €25

For the more serious player, the full-sized Championship Ring Board,  €50

Most suited to a permanent venue such as a pub or social club, framed full-sized Framed Championship Ring Board,  €80

To stop any family arguments, here are the general rules of 'Rings!'

1)  Take turns to throw the six rings and total your score of any rings hanging on the Ring board hooks (values from 1 to 13).

2)  A score is only counted if the ring is hanging down from the hook.

4)  Players must stand an agreed distance from the Ring Board, marked by a line set out on the ground, called the ‘oche’.  A distance of c.160cm and height of c.140cm is recommended for children under 9 years.  For adults and children over 9 years a distance of c.180 cm and a height of c.160cm should provide a good challenge. For advanced players wishing to comply with World Ring Board Academy, rules the ‘oche’ must be 259cm horizontally from the face of the Ring Board and the number 13 hook should by 178 cm vertically from the floor.

Did you know there are many different levels of games for the Ring Board?

2)  Beginners game 2 (High Score): the highest score after each player has thrown three sets of rings wins the game.

3)  Intermediate game (31): The first player to reach a score of 31 using as few rings as possible wins.  This is a great way to practice mental arithmetic.  For example, a player hooks a 10 then a 9, these are added together to get the total score so far (19) and subtract this from 31 to find the number which must be hooked to win (12).  If e.g. 4 is accidentally hooked instead, this is subtracted from 12 to find 7 needs to be hooked to win, etc.

4)  Advanced game 1 (Traditional Game of 'Rings'): This is the standard and most popular game played on a Ring Board.  According to the rules of the World Ring Board Academy, games are played to a pre-agreed total and then ended by hooking the 1, e.g. 100 + the 1.  Once the player gets within thirteen of the total, they are assigned a nomination number.  The player’s next scoring ring must land on their nomination number and if a ring lands on any other number the player’s turn is finished immediately (this is called hanging up), e.g. if a player reaches 91, the nomination number becomes 9 and the player must now hook the 9.  As for the final 1, it is played in a similar way to the nomination number.  If a player lands on any number other then 1, the score doesn’t count and their turn is up.

5)  Advanced game 2 (Around the Clock): Players attempting to hook every number in sequence from 1-13.  If a player hooks an incorrect number his or her turn is over.  This game requires great physical skill and accuracy of ring throwing.

Memories of my childhood !

Below an extract from my memoir ‘Against the Wind’, that describes a memorable game of rings.

“It was during one of these school holidays, when I was ten years old, that I first came across the arrogance of some English people. My cousin Clive was back in Ireland for a holiday and he too came to stay with our grandfather and we would spend a day or two together. On the back of the kitchen door a ring board had been hung and grandfather and I often played a game of rings together. I had become quite skilful at the game and so it was that I beat my cousin Clive several times on the score in a game of the best of three contests. To my surprise at the end of the fourth game Clive picked up his rings from the floor and grabbed mine from the board hooks and threw them across the room in a fit of rage.

‘I didn't come here to be beaten by only bloody Irishman,’ he said. I looked at him and at the scattered rings.

‘Pick them up. They are Granddad’s rings not yours.’

‘You get stuffed Irish,’ was his response. And as I bent to pick the rings from the floor he shoved me and I stumbled and almost fell. That did it. I swung from the floor and landed a good, hard fist straight on his nose. Although he was a year or two older than me he started to cry and our grandfather came rushing into the room to see what had happened. Peacemaker that he was he tried to get us to shake hands and to continue with the game under his supervision. But Clive would have no further part in it and stamped off out into the garden. And to tell the truth I was still too angry to play so I did not care that our game was over.

‘But Granddad,’ I said. ‘He was born in Ireland. How does he think that he is different and better than me?’ Grandfather smiled a little sadly and said, ‘I suppose it is all about what we are taught at school.’

‘Well anyway we won in 1922. Didn’t we? So let the bastards remember that,’ I shouted, loud enough for Cyril to hear in the garden.

‘Now! Now! That’s not nice language, Seamus,’my grandfather said. ‘Come on now. Let’s see how good you are on the board.’ And he tossed a skilful ring right onto the centre hook of the ring board.”

Oops! 2 typos: Second para should read by 'any' not only.