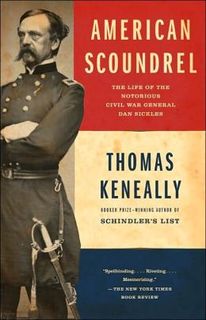 I bought Thomas Keneally’s biography “American Scoundrel,” the life of notorious Civil War commander Dan Sickles in the After Words bookstore in Chicago recently, when there on business, and I am really glad I did.

Keneally is an Australian author, of Irish descent, and is the author of “Schindler’s List,” which is also based on a true story, and was made into a very good movie. “American Scoundrel” would make a great movie, too, with its mixture of low and high politics, adultery, betrayal, exotic diplomacy, and warfare.

Keneally became interested in Dan Sickles when researching the life of Thomas Francis Meagher, the Waterford-born Young Irelander, who was imprisoned in Australia after the failure of the 1848 rebellion, but escaped from there to go on to have a career in the United States as a politician, lawyer, and leader of one of the Irish brigades who fought on the Union side in the American Civil War.

The flag of Meagher’s regiment was presented to Dail Eireann by the late President Kennedy in 1963, and I looked at it every day as I came in and out of the Library in Leinster House. I had an added interest in it, in that I once stayed in the house where Meagher was born in Waterford (now the Granville Hotel), and attended Clongowes Wood, the same school as Meagher, though not at the same time!

Sickles was a close political associate of Meagher in New York politics, and when Sickles was later tried for the murder of his wife’s lover, Meagher was a member of his legal team, charged with coming up rhetorical flourishes that would impress the jury. Sickles was an effective, if unscrupulous, politician. He was largely responsible for New York City’s creation of Central Park, something he gets little credit for nowadays. He was a Democrat in politics, and initially favoured concessions to the Southern states on the question of slavery, to keep them in the Union.

But when the South fired the first shot, at Fort Sumter in Charleston Harbour, he took a strongly pro-Union position and used his political name to raise a large number of volunteers in New York for the Union Army. On the strength of his recruiting efforts, and without any military experience, he became a general in the Union Army.

And this happened after Sickles had been controversially acquitted of the murder of his wife’s lover, Philip Barton Key, a man who happened to be the son of the author of the Star Spangled Banner.

Sickles had neglected Teresa, his wife 17 years his junior, and had carried on several public affairs with women, while married, including a notorious brothel keeper. Yet, when he discovered his wife herself had had an affair, to which she confessed, and he saw her lover, Barton Key, on the street, he armed himself, went out and shot the unarmed Key dead.

But he was acquitted in the trial. His defense team, which also included the future Secretary of War Edwin Stanton, suggested that Sickles was driven momentarily mad by the thought of his wife’s affair, noting too the prevalent belief then that a man had a right to defend his honour, and because, as one of Sickles’ lawyers put it, “the personal body of the wife was the property of the husband” (notwithstanding Sickles’ own notorious misbehaviour).  Key to Sickles’ acquittal, though, experts agree, was his lawyer’s putting forth the then-novel defense of ‘temporary insanity.’

Sickles, once acquitted, quickly regained his good reputation, and went on to become a close friend of President Lincoln and a highly controversial corps commander, most notably at the Battle of Gettysburg. His wife, in contrast, could barely appear in public for the remainder of her short life. She died of tuberculosis in 1867 at the age of 31. Sickles remarried, was equally disloyal to his second wife, but lived to be re-elected to Congress in 1892, having first served there in the 1850s. He died in 1914, at the age of 94, with his funeral held in Manhattan at St. Patrick’s Cathedral.

This book is well-worth reading for the insight it gives in social attitudes in the 19th century and how different these are from those prevailing today. It also presents a great insight into the politics immediately preceding the American Civil War.  WG

John Bruton, a former Teachta Dála in Ireland’s Dáil Éireann, served as the nation’s Taoiseach (Prime Minister) from 1994 to 1997, and as Ambassador of the European Union to the United States from 2004 to 2007.  He is currently President of IFSC Ireland.  A graduate of University College Dublin, with degrees in economics and law, he is a passionate student of history.  John has graciously agreed to write book reviews on occasion here for The Wild Geese.

Also Reviewed for The Wild Geese by John Bruton:

"Battles for the Three Kingdoms"

My reading list just keeps getting longer and longer!

LOL -- there's always the art of speed reading beckoning, as well. We tend to take too long to read, much longer than need be for most things.

If you plan on being a scoundrel be an Irish scoundrel.  I'm looking forward to reading Keneally's book. James Francis Smith author "The Civil War's Valiant Irish."