On September 25, 1916, William Butler Yeats penned the words “a terrible beauty is born” as he wrote about the Easter Rising.  While his poem did not recount the full story, Yeats’ words encapsulated those events and the emotions surrounding them, and, like something from Shakespeare, Yeats’ words forever entered the English language.

Like that poem, Tile Media's docudrama “A Terrible Beauty:  Áille an Uafáis” is not the whole story of the Easter Rising, it represents just some of the stories that were a part of the events of that week almost 100 years ago, drawn from the multitude of first-person accounts available to us.

This roughly 90-minute film focuses on the experiences of both sides as well as the civilian bystanders in two of the Rising’s bloodiest episodes, the fighting along the Northumberland Road and Mount Street Bridge between the Irish Volunteers and Irish Citizen Army and two regiments of the British Army as well as in the area around North King Street and the Four Courts.  The film’s focus does not stray much beyond these two stories.  Writer and director Keith Farrell, and Producer David Farrell brought together in this docudrama the efforts of some two dozen actors and several dozen reenactors, supported by historians and storytellers, and original newsreels and still photographs with reconstructed scenes filmed today.

Concentrating on these two 1916 venues enables the film to reflect many of the key decisions and actions that led to the Rising and decided its outcome.  An attempt to tell the full story of Easter Week would require a great deal more effort and resources to produce what would be a much longer and more complex and expensive film, in the face of the accountants who now frequently decide about such projects.  In reality, no film could succeed in ever fully telling the story, for, as the Duke of Wellington once said, describing battle would be as impossible as describing a ball, for no one individual could possibly see, hear, know, and recall all that happened because he couldn't be everywhere at all times and many details are lost to history in the confusion.

The extensive use of Irish in the dialogue and captioning may not accurately reflect the level of Irish fluency among the officers and men of the Irish Volunteers, the Irish Citizen Army, the Hibernian Rifles, and others but I interpret this as a part of the understandable process of the Irish laying full claim to the story for themselves and their fellow Irish men and women.  It does concern me, however, that it might be seen by a larger audience, not fluent in Irish, as a barrier separating them from the story and dividing them from the men and women who lived it.  This was a particular problem in connection with the various historians and other speakers in the film who, while identified by name in English in the screen captions, have their titles, positions, roles, etc., given only in Irish, leaving the non-Irish speaker ignorant of their qualifications.

The documentary element of the docudrama format raises the bar for the film’s presentation of the period’s material culture and social context.  I have walked the various scenes of fighting in 1916 and worked as a reenactor/living historian portraying individuals of several periods including a 1916 volunteer, so I know from personal experience how challenging it can be to model both the appearance and the behavior of another time and place.  This can be especially demanding for military reenactors who have to be expertly trained in order to fully understand and accurately portray a less than fully trained soldier when that is called for as in this film.  Properly reflecting the material culture of a time and place is an important element in supporting the verisimilitude of an historical film, play, or novel. “A Terrible Beauty:  Áille an Uafáis” comes as close as the available resources allow in terms of clothing, uniforms, and artifacts used by the performers and reenactors. 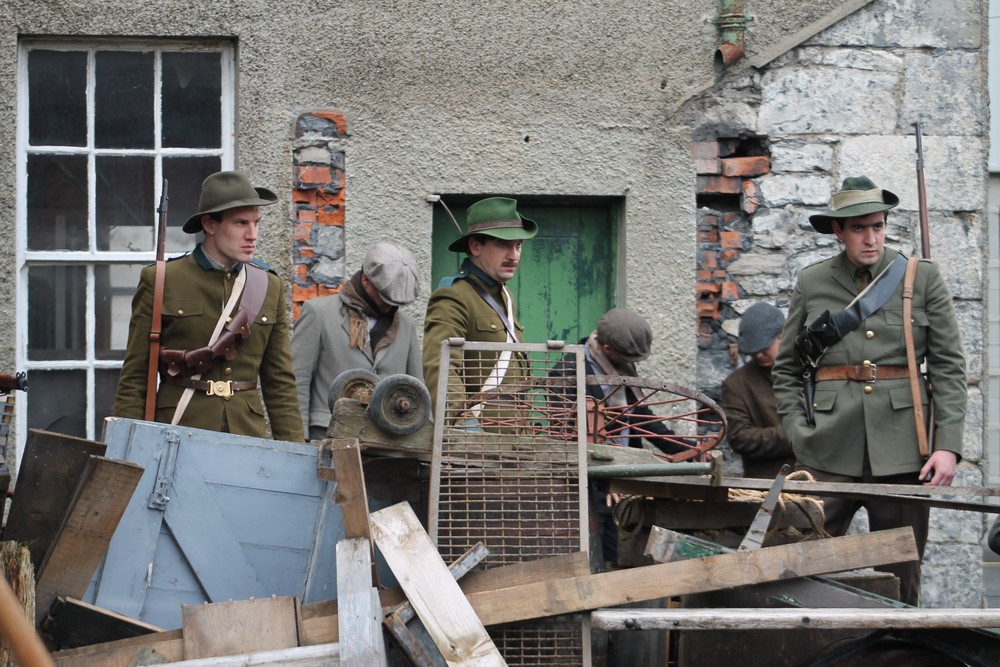 A particular hurdle for filmmakers is that there were only about 1,500 single-shot Howth Mausers all told and yet they were one of the most common weapons among the Volunteers.  As a result, surviving examples are expensive and mostly in museums, private collections, and a few government arsenals – and in general not available to filmmakers.  But it is still a shame, given the significance of the weapon, reflected in the film’s reference to the British soldiers’ complaints about the use of outlawed dum-dum bullets, that there was no apparent way in which the Mausers could have been more evident in the film.

In 1961, the United States commemorated the 100th anniversary of its Civil War, between the North and the South.  Not long before that, a prominent American historian had declared that “we now know just about everything we are ever likely to know about the American Civil War.”  Fortunately, for both historians and everyone else, he was very, very wrong.  In the 50 years that have followed that centennial, I believe that we have obtained a more complex, sophisticated, and deeper understanding of our own civil war and its meaning for us today.  I see in this experience, a possible example for Ireland today.

With the small production scale and the focus upon only two of the battlefields of Easter Week, this film is an introduction to the events of 1916.  It leaves unanswered many questions about the events leading up to the Rising, about what was happening elsewhere in Dublin and the rest of Ireland, what was happening in England and Germany, and most importantly how it all culminated in this short week.  It also presents us with a less than fully realized depiction of the important role of women in the Rising. I would encourage everyone who sees this film, whether the story is new to them or as familiar as the tales your mother raised you on, to use it as the starting point of their own pursuit of a deeper and more complex understanding of that terrible beauty that was and is The Easter Rising.  “A Terrible Beauty: Áille an Uafáis” is a good, fresh starting point for what should become an open and general dialogue about how these events left all Ireland “changed, changed utterly.” -- militaryhistory@thewildgeese.com

I wonder if this will go to general release?