Fond Memories from My Childhood in Bray, County Wicklow 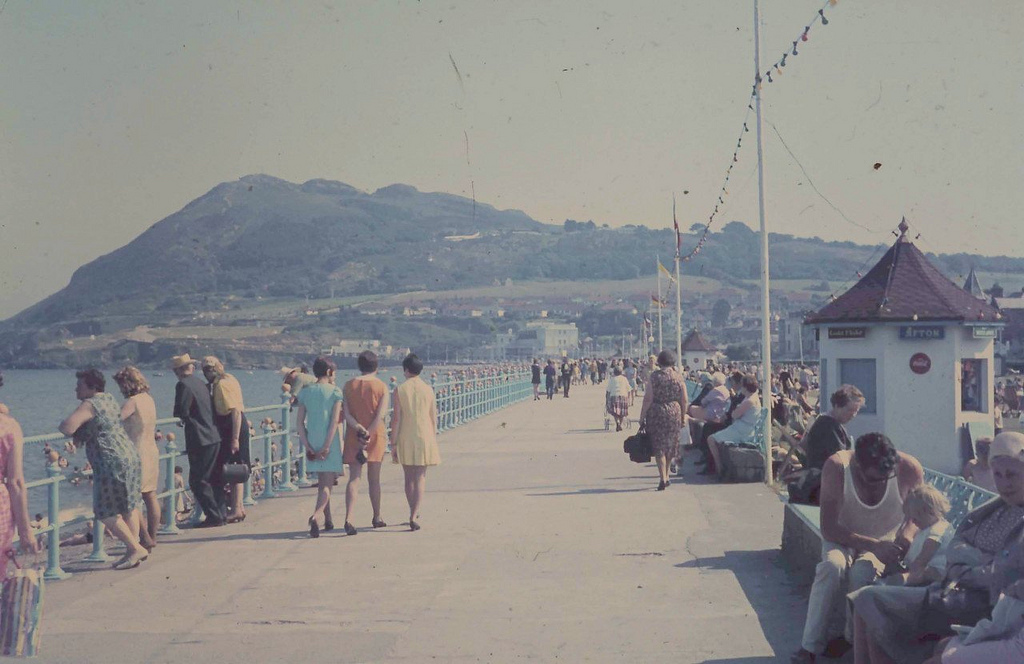 The promenade starts at the northern end near the harbour and Martello Terrace.  This was the childhood home of the great Irish author James Joyce.  There is a mile-long stretch of promenade and a pebbly beach which will lead you to the   link path to start your climb up Bray Head.  If you do manage to climb up Bray Head, it will give you a magnificent view of the surrounding Sugarloaf and The Wicklow Mountains.  Looking out toward the Irish Sea on a clear day, you will be able to see the mountains of Wales in the distance.

In the long ago past, this was my playground.  I was born and raised in Bray, the middle of five children.  The promenade was a haven for all my family, and with lots of school friends we would go "dipping" in the cold water of the Irish Sea.  The cold sea never put us off.  My Mam worked in Casino’s Fish & Chip shop across the road from where we would be "dipping."  Bags of chips would keep us fed until we went home in the early evening, where my Granny O’Rourke would have made a hearty meal of stew or potato cakes -- large, thick pancakes that would fill the whole frying pan with batter.  Then, when it had been slowly cooked, we would let the butter melt into the pancake -- mmmmmmmmmm ... mouth-watering even now! We were as free as birds.  If we were not down at the sea during the holiday, we were up in the woods making "Tarzan's Cave," or picking the Bluebells or any other wild flowers for our Mams and Grannies.  Sometimes, we would venture further afield up to Darley Miller's woods, situated at the top end of the Boghall Road.  In autumn, this is where we would pick blackberries and chestnuts.

We played "hopscotch" with squares marked out on the pavement with chalk (which had, no doubt, been nicked from school!).  Catch five pebbles in the palm of your hand, thrown up into the air, and then turn your hand around and see how many pebbles you could catch on the back of your hand.  Whoever caught the most pebbles won.  Then there were our games of marbles.  A hole was dug into the ground.  Each person threw to see who could get the nearest.  We even played our own version of cricket.  The black section at the end of a lamppost served as the wicket, and the roadside was the field!

Lovely, long days just playing ... no fear in us.  Although, as we went out the door we could hear the words that we heard every day: "Don’t speak to strangers," and "Don’t leave one another" were on the list of things we were not to do.  However, that is not to say that there was no such thing as paedophile’s (bad men and women is what my granny would call them) to instil into us the dangers of not talking to strange men and women.

The 1970s and 1980s brought a wave of tourism to Bray.  All the emigrants would flock home from the mills and car factories in England and Scotland.  Bray was very prosperous, and every house that had a bedroom to spare would take in lodgers.  The Scottish visitors, in particular, would have brought a musical instrument with them: Banjos, accordions -- anything that would sound a musical note.

I was raised in Wolfe Tone, and the next road to us always had lodgers.  So, every night during our school holidays, we could be found sitting on the roadside listening as the music was played with people singing along.  Then, of course, as it got dark we would hear our names being called by the various parents and Grannies.  It was off to bed until the next day.

Lovely innocent days, all gone now.  I wonder how many children of today will be able to recount their childhoods in such a free and innocent  fashion.

Mary Thorpe is the author of "That's Just How it Was," a personal memoir and tribute to her much loved Granny O'Rourke (nee Nolan).  It is an attempt to place the stories she heard and was told into a true and historical context.

That was a wonderful anecdote Mary, calling our childhood back to mind :) My summer nights were spent playing hide and go seek after dusk with the neighbourhood children. It was fun as the dark made the game more challenging! We also played tag and I-spy or just pretended that we were somewhere else in time... You've made me think about those warm summer nights as a child, free as a bird :) Our big cultural difference is the music I guess. We didn't have everyone playing instruments like you did in Ireland. Although my father's oldest brother did play the fiddle :) Yes, those days are gone forever but it sure was nice to think about them again :)

Oh Fran ; its all gone by far too quickly - and its only now since I have retired that I have been able to put my thoughts in writing the book about my Granny.

As children we do not realize how time goes by so quickly - and thought that our loved one's were going to be around forever. !! The real world of adulthood; mortgages - feeding the family and working would beckon all too guickly.!!!!!!!!!!!!!!

Yes, and now childhood will never quite be the same, or have the same type of innocence about it that it had for us back then. It's sad when you look at it that way, so I'm just going to remain awash in the memories that reading your story evoked in me, for a while longer ; )

I tend to try and tell my grand children about all the innocence of my childhood ; But all I get is ' but Nan that was a a Hundred years ago ; Maybe to them to to me its like only yesterday ; so like you Fran I will stay with my childhood

My Aunt ran the kiosk on the right of the photo. I was born just a few hundred yards from where Joyce lived in Martello Terrace. I bet I was on the prominade the day the photo was taken.....
Great Memories :)

Brenda; how wonderful that someone from Bray  knows the place I am speaking about . Don't know how old you are ; but back in my day ; it was all so very innocent. I was 70 years January 1915 /

Yes Mary. I have found memories of Bray, born on the Quinsboro Road and lived in Palermo before moving to Canada in 1980. It was an is a great town. Hopefully I can go back soon to meet old friends there in the near future.

Lovely reminiscences Mary. Thanks for sharing.

A lot of people from Bray emigrated to Canada in that ere. Five of my sister .in .law family emigrated to Toronto. McDonald there were called / fords / and many , many other people from Wolfe Tone also  emigrated.. Most of them are deceased RIP  .

When I was Uni ; I had to complete a paper on Irish Emigration - there was one famous quote I came across and it the ;; 'The best export of of Ireland is its people'.

So very true -even today ; although they are now educated and the cream of Ireland is still leaving Ireland shores , Sad fact