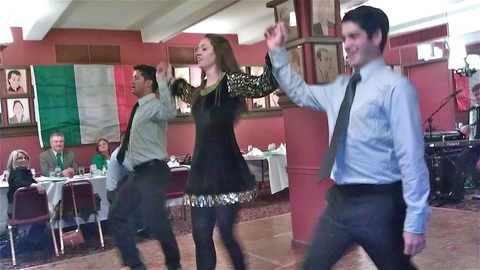 New York -- Friday, with Irish heritage making headlines throughout the world, New York publicist Terry Rooney, with little fanfare, held his 27th annual celebration of Irish heritage, at venerable Manhattan eatery Sardi’s. The self-styled ‘toast of Broadway for 90 years.” Sardi’s is famed for the hundreds of caricatures of Broadway luminaries that line its walls.

The fete drew more than 80 celebrants, including former Irish Taoiseach John Bruton; Marian Harkin, representing northwest Ireland in the European Parliament; and Pat Lardner, CEO of the Irish Funds Industry Association. Among the groups providing entertainment were six senior dancers from Donny Golden School of Dance. A brief documentary about the Easter Rising from Everett Studios was presented by studio head Robbie Everett.

Below, the Irish tricolor alongside some of the legendary caricatures gracing the walls of Sardi's. Bruton delivered brief remarks, most interestingly, praising Home Rule activist John Redmond as an unsung hero of Irish independence. Bruton cited Redmond, the head of Ireland’s Home Rule Party in Britain’s Parliament, for his singular commitment to negotiation and compromise to achieve Irish sovereignty, even as revolution gripped the nation. Bruton cited the 1998 Good Friday Agreement as vindication for Redmond, whose reputation flagged in the aftermath of the Easter Rising and the War of Independence.

Those gathered sang “A Nation Once Again,” written by Young Irelander Thomas Davis, instead of the more usual “A Soldier's Song,” Ireland’s official national anthem. Bruton, a Fine Gael politician who headed the Irish government from 1994 to 1997, had earlier in the program called the anthem Redmond’s song, citing what he called Redmond’s unshakeable commitment to peaceful means to achieve a united Ireland.--Gerry Regan