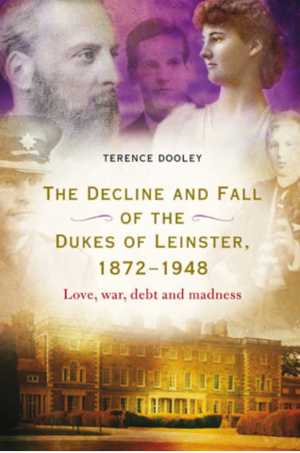 As I have gotten older and my credentials as a curmudgeon have become ever more firmly established, I regularly find myself in situations where I have to remind myself that I am NOT the target audience. Boat cruises are apparently designed for people who must have constant background music and constant high-energy entertainment; I an not the target audience. I find it true for a lot of music, for a great deal of television, and most assuredly for virtually anything that can possibly be called “fashion.” I am not the target audience.

"The Decline and Fall of the Dukes of Leinster, 1872-1948" is a masterful work (although the title does rather give away the ending). The author, Terence Dooley, is, as the book jacket informs us, associate professor and director of the Centre for the Study of Historic Irish Houses and Estates, National University of Ireland, Maynooth. He is a man who knows his subject, and the influences and currents that ultimately would wreak havoc on the great houses and great estates. He traces for us the politics, the economics, the social influences, the roles of the movements toward Irish independence and land use and estate taxes and death duties and he paints with broad strokes and excruciating detail the convolution of the many forces that came together to destroy a way of life.

You’d think that would be fascinating stuff. The problem for this reader, at least, is that there is so much detail, so much data, it is hard to see much less to keep track of the narrative. The opening chapter is a brilliant dash through the history of Ireland from 1169 to 1872, when the real focus of the book begins. He covers a tremendous amount of material in a very short period of time. I thought I knew something of Irish history, but wading through the first chapter revealed that I have a lot of work to do before I can call myself even minimally informed. This express train through  700 plus years was both tantalizing and frustrating. It really made me want to do some further study and fill in at least some of the gaps.

It is rich in information, and the style takes some getting used to. I found myself thinking that in some of his two or three paragraph summaries was the potential for a whole novel.

As an historian, he uses letter, newspaper clippings, excerpts from speeches, which can help the reader hear the voices of the time and a deeper sense of the age. As a good historian, Dooley ties together bits of data and information that might otherwise go unremarked. For instance, while talking about the general perception that the landlord “takes care” of his tenants, and sharing some of the glowing reviews about the Fitzgeralds,  at the same time he notes the number of immigrants who went to America who came from lands owned and administered by the same family. Those are the moments when he gives life to the data, or lets the data give life to the text. Unfortunately, those moments are too rare.

Strangely, for all the detail the author brings to those moments, we somehow never seem to get to know the people, to get a feeling for their personalities, in spite of the lists of items and excerpts from their writings. There is an old show business adage – don’t tell them, show them. I’m afraid the book has more of the “tell” and not nearly enough of the “show.”

The jacket blurb refers to this book as “the Downton Abbey of Ireland.” I suspect that was written by someone who hadn’t read the book. At one point I found myself wondering if this had been a thesis that was later turned into a book.

The last chapters are the most interesting. The characters become more real, the plot more convoluted but the smothering details never cease. All you ever wanted to know about everything. After the death of Hermione – 30 years old, beautiful but emotionally fragile, caught in an unhappy marriage and mother of two sons with the Duke and one with a many in her social group – we spend a lot of time with Maurice, the eldest son, unable to manage the estate as a child of 8. An administrator is appointed, who proceeds to install himself, and eventually sell off a lot of the property, creating the strange entity of a Duke without property. Maurice is a fragile child, and epileptic, which in his day was associated with insanity. As he arrives at his maturity, when he would be expected to assume control, he is declared incompetent and put in a mental asylum in Scotland (the choice, the author suggests, since Scotland does not have a coroner’s court. The author delights in speculating further about possible motives, malfeasances and machinations, but in the end, lack of evidence leaves us mildly titillated but left to wonder).

The second son, Desmond, was strong, athletic, very well-liked, but unable to inherit as long as his brother was alive, so the administrator continued in place. Desmond went into the Army and was killed in the first World War. (I am, taking my cue from the Downton Abbey reference, focusing on the people but trust me, there is enough information along the way about economic factors, politics, independence movements, Land Acts and tax problems to keep any accountant more than enthralled.)

The third son, Edmond, Hermione’s son from an affair with someone in her social set, is shunned by the family because of his birth but acknowledged, and so is a contender in the inheritance pool, The problem is that he is a profligate gambler and an even more profligate spendthrift. He married a chorus girl, but deserted her early on, and their son was quickly taken away by the familial powers that be, so the boy was raised with very little contact with either his mother or father. (He does emerge much later in the narrative.) At one point (remember, Maurice is still alive in the asylum) Edmond owes the equivalent today of around 1.6 million pounds, and a speculator offers to pay his debts and give him an annual allowance in exchange for his inheritance. He sells, and when Maurice dies, the lawyers all get rich.

(If you think this is sounding more like a soap opera than a BBC Masterpiece Series, you’d be right, except without the excitement. Because in all of this, the stream of factual support never wanes nor gives way. )

Edmond continues to try and improve his financial lot, and is caught by another swindler who takes him for another small fortune, which he does not have. He goes to the United states to try and find a rich wife. Everything he touches turns to debt.

The situation of the family, the house and the estate becomes increasingly critical, and the First World War, the world wide depression, what seem to be some very strange financial decisions, Irish independence and the huge tax increases on the wealthy, and death duties, the Irish Land Use program and host of smaller events create the perfect storm which destroys most of the great Irish houses. The financial burdens are so great that many literally tear off the roof, and walk away, leaving the houses to fall into ruin.

The Leinster family house struggles along, the trustees at one point selling all the heirlooms and furniture (Randolph Hearst bought a lot of the furnishings) but finally in 1948, the great house was sold, and the author gives us the full list of the subsequent  buyers and occupants up to the present. A final piece of irony – the house has been turned into a country house hotel with two golf courses, and one of the family, Hermione, sister to the eventual holder of the title is a professional golfer, and regularly returns to the house, as the author tells us “in a much different guise to that of her namesake and great-great grandmother.”

It’s an interesting and convoluted story, told in a convoluted and uninteresting style. It is a masterful compilation of detail and is probably an important contribution to Irish history; it is fascinating to see how much detail there is available to a dedicated researcher; but in the final analysis, it is a tough read, it is most assuredly NOT Downton Abbey, and it will ultimately only appeal to a very specialized audience of very dedicated readers.