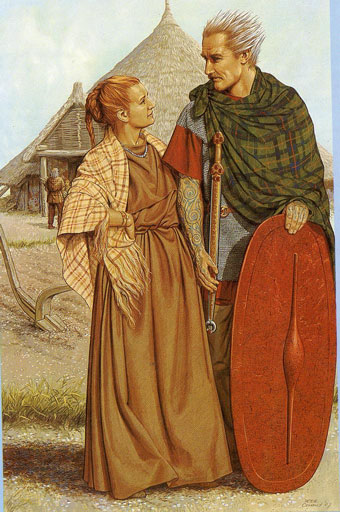 One Celtic custom that survived the conversion of Ireland to Christianity was divorce. Ancient Irish law, written in the seventh century, and known as Brehon Law, set forth several reasons that divorce could be obtained. In the modern era, divorce was not permitted in Ireland until 1996.

A wife could divorce her husband if he failed to support her, if he spread a false story about her, if he circulated a satire about her, or if he tricked her into marriage by sorcery. A man who was sterile, impotent or who practiced homosexuality could also be divorced. If the husband repudiated her for another woman, she could choose to divorce him, or stay in the house, along with the ‘secondary wife.’

A wife could divorce her husband if he became too fat to have sex!

The law provided that a husband could strike his wife to correct her, but she was permitted to divorce him if his blow caused a blemish.

Finally, a man had to be careful about sharing with others the intimate details of his sexual relationship with his wife, since she could divorce him if he was indiscreet because, as the law stated, “it is not right for a man who tells of bed to be under blankets.”

There were several grounds on which a husband was permitted to divorce his wife.  They also included unfaithfulness, persistent thieving, inducing an abortion on herself, bringing shame on his honor, and smothering her child.

The rules for the division of property upon divorce were thoroughly modern.  The share of each spouse depended on the kind of marriage, the amount of property brought into it by each partner, and the proportion of the household work borne by each.  Each partner received back what he or she brought into the marriage, as well as a portion of the profits earned and acquisitions made during the marriage.

The importance of the woman’s role in the rural economy was recognized.  For example, since textile production is labor intensive, and the value of the product is the result of the work performed, rather than the original worth of the raw materials, the woman was entitled to a larger portion of all clothing and woven cloth.

The division of property was based on three factors:  land, labor, and capital or livestock.  The portion assigned to land and capital was distributed regardless of the conduct of the spouses.  But if the marriage broke up due to one partner’s fault, then the labor portion went to the innocent party. “If one of them is ill-behaved, the labor portion of the ill-behaved falls to the well-behaved.”

The law stated, “If they divorce, each divorce shall be without mutual defrauding.  If they divorce by mutual consent, let them divide their property in accordance with legal propriety.”   And this was the seventh century!

In many ways women in Celtic Ireland were dealt with more fairly than in the rest of Europe at the time, or indeed under common law for centuries.

Catherine Duggan is an attorney and the author of "The Lost Laws of Ireland."

I had no idea there were Brehon law addressed divorce.  By the way Catherine, my grand mother was Bridget Duggan, She was from Rathmore in County Kerry. Married my grand father Maurice Keane & they lived in Brosna, Kerry. There oldest daughter my aunt Katie (Catherine) also had a daughter, my cousin Catherine. The family settled in Castleisland, Kerry.  By the way There cousins in Rathmore were Sullivans and Mahoney. They all came to New York and stayed there to this date.  Wouldn't it be a hoot if we were connected somehow. Take care and God bless....John

Catherine Duggan does us men a favor by reminding us that any effort we make to eat properly and to stay fit will be rewarded by our not being summoned into divorce court!  Thank you, Ms. Duggan, for educating us about the ancient wisdom of our ancestors.  Your efforts to unearth deeply buried details of ancient Ireland are greatly appreciated.  Keep digging!