New York -- University of Limerick Professor Ruan O'Donnell drew more than 40 to O'Lunney's Times Square Pub on Thursday, October 2nd to issue a resounding rebuttal -- some would argue refutation -- of the recent critics of the 1,700 who went out on Easter Monday 1916. Directly challenging former Irish Prime Minister John Bruton and Senator David Norris, O'Donnell pointed out, in part, to those who argue that the Rising was inherently undemocratic as well as destructive that a fraction of the population of Ireland in 1916 had the vote under British rule, and changing that reality was not in prospect with any of the Home Rule measures detractors of the Rising hold forth as a peaceful path to eventual Irish sovereignty. 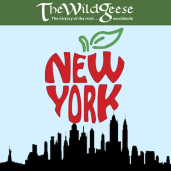 Dr. O'Donnell spoke to an even larger crowd earlier in the week at Hibernian House in Pearl River.  His talk was excellent, his points well made and based on historical facts as opposed to the wistful speculation of those who believe that Home Rule was anything more than a canard.  I would encourage the Wild Geese could reach out to him and encourage him to do an article.

Comment by Micheal O Doibhilin on October 8, 2014 at 11:22am
As we have seen repeated again in the recent Scottish vote on Independence, the promises made were just so much hot air. This is a repeat of what was on offer in 1914 and beyond - leopards don't change spots.

I've been waiting for some time for some authorative person to speak out against Bruton's views. Now I can say that everyone in 1916 know that Home Rule was a sham and a number of well intentioned Irish statesmen were fooled by this British ruse for a goodly number of years. No wonder the IRB and later the IRA members (not the least of whom was Michael Collins) realized early on that violence was the last and only solution to British subjugation and machinations. As Tom Barry said "the British descended into Hell and down after them we had to go" As for Mr. Bruton's claim that the Irish temperament was changed by the War of Independence to a violent nature he forgets about the years of humiliation, subjugation, disenfranchisement, and starvation on a population level visited upon the Irish population by their British masters. I can't believe that Bruton is unaware of all of this. What a load of tomfoolery.

Mr. Burton and those like him, who selectively edit history and look at it through the prism of their own agendas, are proof of the observation of the author Saul Bellow “A great deal of intelligence can be invested in ignorance when the need for illusion is deep.”

Well said and to the point - ignorance and illusion aplenty but I have to wonder as to the capacity to make the investment.

Ditto to Neil Cosgrove's suggestion above that the WG reach out to Professor O'Donnell to do a piece for us on this webpage. I second the motion.