Cromwell And His Irish "Friends" 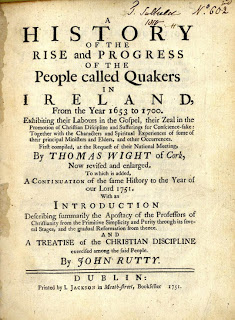 Almost all genealogy researchers have a goal of discovering the immigrant ancestor especially the Irish! Where did they come from? Why did they choose this land? What did they do after they got here?

I realized, that to answer these questions, I needed to know more about the Quakers. The more I researched, the more ancestors I discovered to be of this religious persuasion. Their method of record keeping was a treasure trove of information. They diligently recorded births, marriages, deaths, and burials. The notes of their monthly meetings were a glimpse into their everyday lives.

Thomas Pim, my third great grandfather, was born in 1790, East Caln, Chester County, Pennsylvania, the first recorded birth in our family bible. He had 12 second great-grandparents, all members of the Religious Society of Friends, with eight of them married in America before 1715. These wonderful people came from England, Ireland, and Wales.

“Immigrationof the Irish Quakers into Pennsylvania, 1682-1750: With Their  EarlyHistory in Ireland,” by Albert Cook Myers, was filled with details about my ancestors. Two names that were often repeated in the book (published in 1902) were those of Oliver Cromwell and William Edmundson. Both men played important roles in the lives of my ancestors in Ireland.

Many of the soldiers in Cromwell’s New Model Army were given land in Ireland that was confiscated from native Irish as a reward for their service in Cromwell’s invading force. Some of my ninth great-grandfathers were among this group. Myers suggested that because of Cromwell’s actions there was greater opportunity for religious sects to develop, though clearly those thousands of Irish who suffered massacre and confiscation at the hands of the New Model Army would have a less benevolent view. William Edmundson, a veteran of Cromwell’s army, began to try to convince his former comrades about the goodness he found in the Religious Society of Friends.

Myers quotes John Grubb Richardson (1813-1890), a prominent and representative Irish Friend, who says of his family, "We were members of the Society of Friends, our forefathers having been convinced by the preaching of William Edmundson in 1660. All our ancestors came from the north of England in Cromwell's army, and received grants of land from him to settle in Ireland."

John Pim (1641-1718) was converted by William Edmundson in Cavan. He followed Edmundson to Laois, moving from Mountmellick to Maryborough (Portlaoise), to Coolucant and then to Mountrath. Here he and his wife Mary raised eight of their 11 children, three having died young. In apparent acts of civil disobedience, John was imprisoned many times in the 1660s for non-payment of tithe to the government-established Church of Ireland. He had a successful butchery business with Richard Jackson. Mary tended their interests in John’s absences. The Quaker Pims in Ireland descend through this John Pim and Mary Pleadwell. Their descendants were merchants, selling glue, candles, blue, and soap. The Pims had a mill producing rapeseed oil at Lackagh. Anthony Pim (c. 1774-1842) was a brewer. He was also involved in the importation of American and Baltic timber. In 1856, James Pim & Sons, Market Square, were grocers, wine merchants and woolen drapers, with a thriving woolen business in Dublin. There are Pims in Ireland today, many of them still associated with the Friends.

Another film at the LDS Family History Library gives detail of Richard Jackson, who migrated, from England, to Lurgan, County Armagh, in 1649. He married Margaret Keete, also from England, at Carrickfergus, County Antrim. In 1655, he moved to Cavan, and in 1659 moved to Mountmellick. He joined the Society of Friends in 1654 and was imprisoned for his beliefs in 1661. Their son, Robert Jackson, is often mentioned in "The Journal of William Edmundson". He sometimes accompanied William in his travels. According to Mountmellick Quaker records, Richard was a soldier in Cromwell’s army and came to Ireland in 1648. He became ‘convinced’ about 1654.

William Edmundson went to see Richard Jackson upon his deathbed and said of him, “He was convinced of God’s everlasting Truth about the year 1654, since which time he walked in the Truth, and with the Lord’s people, bearing his share of suffering as it came, whether spoil of goods or imprisonment of body, for the Testimony of the blessed Truth, which he had received of the Lord, and in which he believed. He was a serviceable man in the creation, and more especially in the Truth. ...” [Records of Mountmellick Meeting: "The seventh of ye second month, 1679.”]

Richard’s father, Anthony Jackson, served the English government in a number of capacities:

Because of his support of the Stuarts, he was arrested by Cromwell at Worcester and imprisoned in the Tower of London eight years, charged with treason. By that time, his property was gone and, being penniless, he was released. His sons, meanwhile, were granted manor estates of confiscated lands in Ireland for their support of Cromwell in 1648, and the family moved there in 1649.

Anthony was born about 1599 in England died about 1666 in Ireland. The name of his wife is unknown. He left three sons who continued his legacy -- John, Richard, and Anthony. It is even posited that Andrew Jackson, seventh president of the United States, is a descendant of Anthony.

In 1660, Richard Jackson, among other Friends, was fined 40 shillings and imprisoned for 14 weeks, for holding Quaker meetings.

My sixth great-grandmother, Dorothy Jackson, who married William Pim, in 1715, in Mountrath, is the granddaughter of Richard Jackson and Margaret Keete. William is the grandson of John Pim and Mary Pleadwell. William and Dorothy are my immigrant ancestors to America.

When a Quaker individual or family, moved from one location to another, it was necessary to have a certificate of removal to present at the new meeting. This document usually stated whether or not one was in good standing with the meeting and whether or not the individual was married.

As I researched at the Family History Library, reading through the old Quaker records on film, I found that many certificates of removal from Ireland to Pennsylvania were signed by Pims, Jacksons, and other names I had begun to recognize.  For me, it was like reconnecting with old friends.

My life has been enriched by discovering ancestors who had high ideals for living, and regardless of consequences, lived up to those standards. They turned their hearts from war to seeking after Truth, as they called it, and made their corner of the world a better place.

ABOUT THIS BLOGGER:   Susan Potts Kimura graduated from Brigham Young University with a degree in English and a minor in history and was a genealogy researcher for a genealogy firm in Salt Lake City.   She is currently an elementary school aide working with slow readers.  We look forward to more articles from Susan on her Irish Quaker Ancestors!