If you are at all interested in the Great Famine in Ireland in the middle 1800's, this book will introduce you to a woman who, moved by her compassion for the poor in general, and the sufferings of the Irish in particular, went to Ireland, and travelled around the country, mostly by walking, to meet the people and see what was going in terms of education, housing, labor and how the poor were being helped. It was an extraordinary undertaking for her time, but that alone does not describe Arsenath Nicholson, the compassionate stranger you meet in these pages. It was not her only achievement, not the only time she travelled.

Fair warning – it is a book filled with detail. The author has assembled an extraordinary amount of research and scholarship, and manages to weave it into her text easily and with grace. But it is a scholarly text: there are 52 pages of notes to the text, an additional 19 pages of references, and an index of 16 pages. The places she went, the people she met, the food she ate (although that is a simpler list, since Ms. Nicholson was a vegetarian who eschewed coffee, tea, all liquor and anything even suggestive of being a stimulant), all are woven into the tale. It is not a novel, and the amount of detail can occasionally become a little numbing. (Do we really need to know that the 1791 census lists 227 residents of Chelsea by head of household? On the other hand, I did not know that Arsenath was the name that the Pharaoh gave to the wife of Joseph in the Bok of Genesis, and you never know when that kind of knowledge can come in useful.) But you are granted an exquisite and detailed look into her time as well as her life and her travels, and it is worth the effort to stick with it.

Spellbinding the locals as she travelled

One of the recurring realizations that this book provides is that life in the 1800’s was no less complex and sophisticated in the issues of the day than are we in our own 21st century. Issues of slavery, labor disputes, women’s rights, economic issues, international pressures and influences, the role of government in the private lives of citizens, the dangers of “improvident” health and diet, all are issues that we see influencing Mrs. Nicholson and becoming topics for meetings, letters, and books. It was not a “gentler, simpler time” and she was not a gentle or simple woman.

Mrs. Nicholson was a woman of great faith, and great abilities; she was an ardent abolitionist, a dedicated health enthusiast (a follower of Dr. Graham who developed the Graham cracker) and a temperance proponent, and the 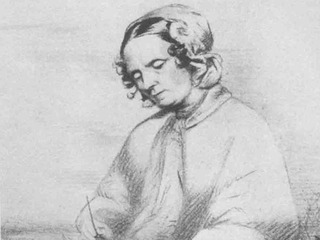 author of several books and numerous letters and tracts and pamphlets. Living in New York she ran a boarding house named “Temperance House” and the advertisement noted in part that the house “is open for such persons as wish to partake of a vegetable diet… The house is kept on strict Physiological principles.”

She was very familiar with the Bible, and as she made her way through Ireland, often reached out to the local population by reading aloud. Especially among Catholics, there was little direct knowledge of the Bible, and people were fascinated by her and the stories. Much of the population was also not literate, and so readers were always welcome. She apparently had a pleasant voice for singing as well, and there are several instances of her singing a hymn either for her own enjoyment or to please and attract others. Although it is hard to get a sense of her personality, because everything she wrote and so much of this book focuses on her causes and her mission. But she must have had some charm, because she is often invited to stay with people she has just met, and when news of her departure from an area becomes known, people walk long distances to bid her farewell.

Growing despair with the pace of relief

Now I have a confession to make. After a while I found myself skimming through the details of some of her travels and focusing on the long excerpts from her letters or writings that are included. They give a vivid, although sometimes despairing, sense of the situation of the poor in Ireland, and the frustration as she increasingly realizes how much of the disaster could have been avoided and how much more meaningful help could have been provided by government and private sources alike. She did raise money from the United States, and did provide relief on a small, individual scale. She was never able to raise the wide response that she hoped for, but she had a list of famous friends, and in later years was included as a member of an official “peace mission” to France.

I found myself wanting to seek out her books, and read of her travels and encounters first hand. There are tantalizing bits that are referred to without much explanation, like her running into the boy shepherds from County Wicklow where they spoke and read Latin. That may be something about which many are familiar, but this reader was pleasantly startled, and another note has been added to my own list of things into which I need to dig further.

There have been a number of fictional book and movie scripts that deal with people going back in time, and I suspect many are fascinated at being able to get a glimpse of an earlier age, even if only a vision created by Hollywood. In this book, we have a vivid and detailed glimpse of a particular place at an extraordinary and awful time. It could perhaps have the high drama to make a basis for a Hollywood script, for it is a fascinating read, and for anyone interested in Irish or American history of this era, it is a window into that age that is wonderfully compelling.