Clare Book No.1 Bestseller on Amazon

I'm in Ireland for the launch of book  Doolin. The book was published on June 1 and was on Amazon before copies were delivered to Irish outlets. On Thursday last I read that Doolin was # 1 bestseller on Amazon's Irish Travel and Guidebook list...a pleasant surprise. Later I noted that it was # 1 on Amazon's Folk and Traditional Music list...a book on Bob Dylan was # 3. My publisher told me yesterday that the book has sold out in Ireland and has gone back to press. What a way to come back home.

Doolin will have its official launch on Sunday, June 21 at Doolin Hotel @ 4pm.  Wild Geese in Ireland are heartily welcome...there will be music, stories and refreshments. Bígi linn! Below is some information on the book.

Doolin, the recently published book by Ennistymon writer Eddie Stack made the No. 1 slot on Amazon's Irish travel/guide book in its first week. Doolin also took the No.1 spot on Amazon's Folk & Traditional Music list, with Bob Dylan at # 3.  Doolin sold out its first Irish print run in a few days. The book will be officially launched at the Doolin Heritage Weekend on June 21 at the Doolin Hotel.

“I know of nobody better than Eddie Stack to write this book.”

Doolin is a unique book about the place, its people and culture. Beautifully written, this collection of essays and conversations features local tradition-bearers who were renowned for their music, songs, dance and storytelling. Folk art and traditions run through the book, which has chapters on the music of the Russell Brothers and the Killougherys; reminiscences of the last Doolin native Irish speaker, Paddy Pharaic Mhichil Shannon; the gentle art of storytelling with Stiofáin Uí Ealaoire, Seán Ó’Carún and others. Also featured are Botious MacClancy and Francis MacNamara, local gentry who made Doolin famous in the 16th century and the 20th century.

Doolin is illustrated with photographs, music, songs, maps and journal excerpts. It is an essential work for anyone wishing to know the background of this magical place

Eddie Stack grew up in Ennistymon, County Clare. He played music and collected tunes, folklore, songs and stories from Doolin tradition-bearers between 1969 and 1985. He is the author of four collections of short stories, a novel and three novellas. The New York Times, San Francisco Chronicle, The Observer and other flagship publications have lauded his work in their reviews. Eddie Stack teaches at the Celtic Studies Department, UC Berkeley, California. 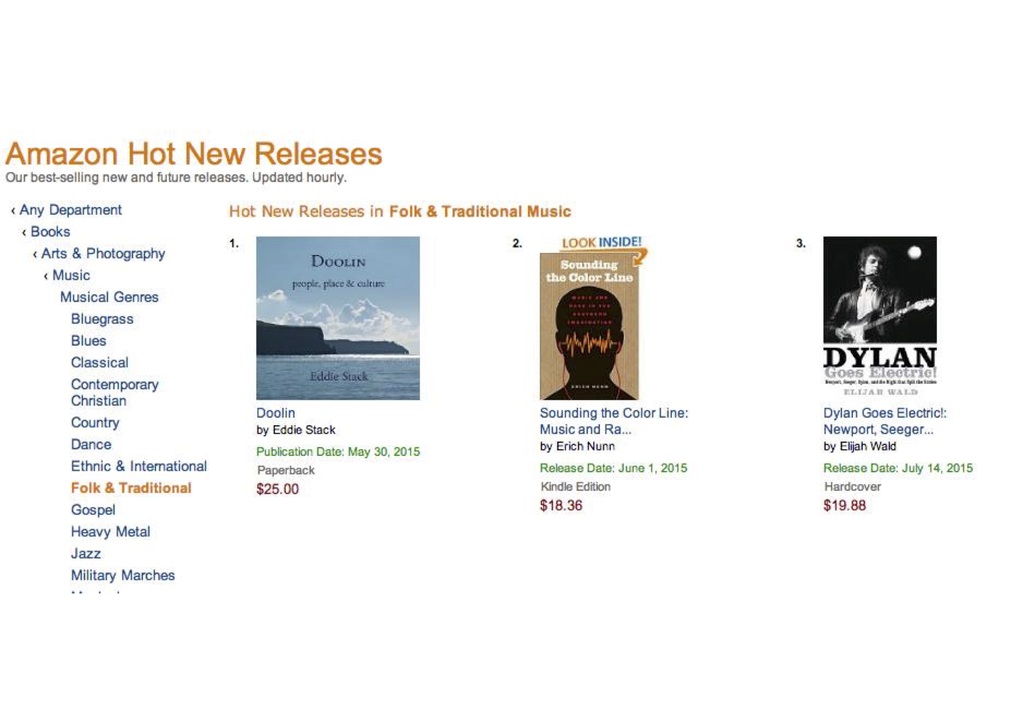 And how do I go about purchasing an autographed copy, mo chara?

Bill...autographed copies at www.charliebyrne.com. This is an indie bookstore in Ireland, so check out their shipping rates.

Congratulations! It doesn't get any more prestigious than Charlie Byrne's Bookshop in Galway! I hope you have many sales!