Part 2: In Corcoran's Legion And The War's Later Years 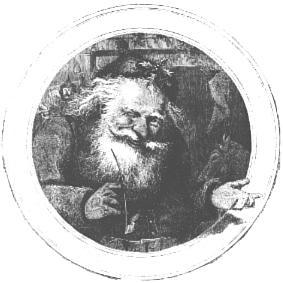 Perhaps one of the best examples of how religion and the Celtic fondness for revelry and merriment blended together during the Civil War years is the manner in which Irish in the Union Army observed the holiest day of the year -- Christmas. Fortunately, copious accounts of the first two Christmases of the war are available and offer an interesting view of how Irishmen in blue celebrated the birth of Christ.

Left, a depiction of Santa Claus from the Dec. 30, 1865 issue of Harper's Weekly. Though Santa didn't appear to be part of the Irish regiment's Christmas rites, he already was becoming a national institution.

On December 24, 1861, the Irish Brigade was in camp near Washington, D.C. Brigade historian D. P. Conyngham wrote of this first Christmas Eve of the war, "the soldier's thoughts fled back to his home, his loved wife, to the kisses of his darling child, to the fond Christmas greetings of his parents, brothers, sisters, friends, until his eyes were dimmed with the dews of the heart." However, to drive away these feelings of homesickness, the men gathered together at the head of each company street to tell stories, play instruments, sing Christmas songs and Irish airs, and dance "jigs, reels, and doubles" around the fire.

Religion was not neglected on this Christmas Eve and the ringing of a bell at midnight called the men to a Catholic Mass celebrated by Fathers James Dillon (63rd New York), and Thomas Ouellet (69th New York). One man remembered, "The attentive audience crowded the small chapel, and were kneeling outside on the damp ground under the cold night air."

Father Dillon (photo right) read "the beautiful Gospel from Saint Luke, giving an account of the journeying of Joseph and Mary, and the birth of the infant Saviour in the manger in Bethlehem; after which the hearers quietly retired to their tents." On Christmas morning, the bulk of the Brigade again attended Mass, and then spent the day "as pleasantly as possible" with their fellows.

Soldiers in the Irish 9th Massachusetts Infantry, part of what would later become the V Corps, spent some of the days leading up to Christmas, as one historian has written, "decorat[ing] their camp with evergreen and ivy, and tents were adorned with crosses and green wreaths." Fine weather on Christmas Day enhanced a High

Mass celebrated by the regiment's chaplain, Father Thomas Scully; several officers and ladies sang Vespers in the chapel tent later that day. Some of the regiment's officers spent the evening of Christmas at a banquet "furnished by a Washington caterer, which lasted long into the night. A number of officers joined in the food, music, dancing, speeches, and poetry of the occasion."

The Army of the Potomac's Christmas the following year, 1862, was not quite as festive. Perhaps typical of many Irish-American soldiers' thoughts on this dark Yuletide were those of Colonel Patrick Guiney of the 9th Massachusetts. On Christmas Eve he could manage to write to his wife in Boston only, "How much I would like to be with you tomorrow but cannot -- I wish you my dear bosom-angel 'A Merry Christmas'."

That month, the Irish Brigade had suffered horrendous losses at the Battle of Fredericksburg less than two weeks before Christmas, and most thoughts that somber December were of comrades gone and distant families. Father William Corby, chaplain of the 88th New York, remembered, "All of us were sad, very sad," and that the Brigade was settled in "the same quarters which we had occupied before going into the battle [of Fredericksburg]." One member of the Brigade maintained, however, "Christmas festivities

were kept up in the camp in the usual, light-hearted manner.The remnant of the Irish Brigade was too small to get up amusements on a large scale, but they still enjoyed themselves."

The Christmas of the 116th Pennsylvania, which had recently joined the Irish Brigade, must have been somewhat dampened when its chaplain, Father Edward McKee, departed the camp on Christmas Eve, having resigned his commission due to ill health. Nevertheless, the regiment's historian noted, "Christmas Day [1862] was celebrated in the camp, many boxes of good things from home were received, and shared by the recipients with comrades less fortunate. Some of the boys were a little homesick, to be sure, but enough were sufficiently light of heart to drive dull care away. A large Christmas tree was erected in the centre of the camp, and peals of laughter and much merriment greeted the unique decorations, tin cups, hardtack, pieces of pork, and other, odd articles being hung on the branches. At night the camp fire roared and blazed, the stars shone above the tall pines, and the canteen passed around, and care banished for the hour."

Copyright © 2013 GAR Media LLC. This article may not be resold, reprinted, or redistributed without prior permission from the author. Direct questions about permissions to permissions@garmedia.com