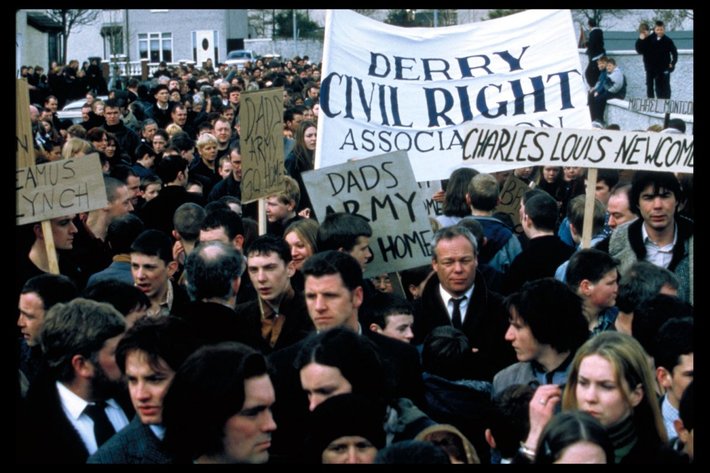 Fifty years ago this Jan. 30, as 15,000 to 20,000 people attempted to march peacefully through the streets of Derry, British troops opened fire with assault rifles and killed 13 unarmed people. Many see the bloodletting as the seminal event of the "Troubles" in Ireland.

The march had been organized by the Northern Ireland Civil Rights Association (NICRA), part of a movement begun in 1964 that pushed for such long-overdue reforms as equal voting rights and housing opportunities for the Catholic minority.

The Unionist-controlled Stormont Parliament banned the march, and the paratroopers were supposedly called in because of fears that the march would turn into a riot. In the short time it took for those paratroopers to fire 108 rounds of ammunition and kill 13 people, they radicalized the nationalist population of the entire island to a degree no revolutionary speech or pamphlet ever could. Indeed, in those few minutes, the 1st Battalion Parachute Regiment unwittingly became the midwives for the full rebirth of the IRA.

In the Republic, where much of the population had seemed indifferent to Northern Ireland for many years, on Feb. 2, 30,000 people marched on the British Embassy in Dublin and burned it to the ground. Irish outrage was such that citizens lay down in the street to prevent the passage of fire engines looking to extinguish the blaze. British-Irish relations sank to their lowest ebb since the Irish War of Independence.

The paratroopers who did the killing that day were thought to be some of the most disciplined troops in the British army. Immediately after the violence ended, the paratroopers began to claim that they had been fired on first and only returned fire in self-defense. Not a single soldier was wounded, and authorities found no physical evidence of any other weapons, such as shell casings or spent rounds.

And though it would be claimed in the hearings that some of the victims showed traces of gunpowder on their hands, the British government has since conceded that there is no credible evidence that any of the dead or wounded had handled weapons. In addition, every single eyewitness account affirmed that the dead were all unarmed. The soldiers' claim of being fired on has never been substantiated by any evidence.

It must be said, as well, that even if these allegations were true, it would still not explain the paratroopers' indiscriminate firing into crowds of people. Some were shot in the back, desperately running for cover. Some had been hit more than once as they lay bleeding on the ground; seven of the dead were under 19 years old.

Civil rights activist Don Mullan remembers running for his life as people screamed, "Jesus! They're going to kill us!" (Mullan, by the way, played a vital role in convincing the British government to reconsider their cover-up with his book, "Eyewitness Bloody Sunday.")

The killings themselves gave the advocates of armed resistance on the Nationalist side a tremendous boost of support from the outraged Nationalist community, particularly the IRA, whose patrols and membership had grown steadily in number during the preceding months, but who now had a stature not seen in the North in decades.

The investigation by the British Government inadvertently gave the IRA another boost. On April 19, less than three months later, the finding of the inquiry led by Lord Widgery was released. His conclusion: The killings had been justified, that the paratroopers had been in danger of their lives and that some of the dead may have been armed. Widgery did concede that some of the killings had "bordered" on the reckless.

Major Hubert O'Neill, the coroner in the case, issued a very different opinion than Widgery's on August 21 of that year. O'Neill concluded that the Army "ran amok that day. ... I would say without hesitation that it was sheer, unadulterated murder. It was murder."

For many, Widgery's whitewash was the culmination of a campaign of persecution of the Nationalist population that had begun at 4 a.m., Aug. 9, 1971. That morning, thousands of British troops, accompanied by RUC Special Branch detectives, raided hundreds of Irish Catholic homes, dragging men from their beds, often with wives and children screaming and crying as they cowered in fear.

Though the Unionist Ulster Volunteer Force paramilitary had been highly active in the months before this internment campaign, not a single UVF suspect was arrested, while 342 IRA suspects were seized. In addition, the intelligence reports used to make the arrests were out of date. Many of the men arrested had not been active in the IRA for years. Many in the Nationalist community sensed there must be at least a tacit alliance between the British government and Unionist paramilitary organizations.

Now, after Bloody Sunday and the subsequent British government actions, more and more people in the Nationalist community looked to the IRA for protection. Matt Morrison, a witness that day, remembered, "I knew at a visceral level that I was done begging for my rights. I would rather be scared and armed than scared and empty-handed." Nothing was ever the same in Northern Ireland after that day, the hard men on both sides would be in control now.

A month and a half after that horrifying day, during a speech in Belfast's Ormeau Park, the leader of a Loyalist paramilitary group said, "... it may be our job to liquidate the enemy." And two weeks after that, the British dissolved the Stormont Parliament, which had always been composed almost entirely of Unionists. More people were killed through the end of the year than in any other year that would follow. It would take 26 years for the two sides to sit down at the same table, and that was another legacy of Bloody Sunday.

Twenty-four years ago, more than 20,000 people marched in Derry to commemorate the 25th anniversary of the slaughter. Shortly after, British Prime Minister Tony Blair announced a new judicial inquiry into the deaths on Bloody Sunday that has dragged on into its fourth year. It may eventually issue an official government apology for the deaths. Evidence continues to come to light, and the families of the victims, who have worked tirelessly the past 30 years, continue to publicize the innocence of their loved ones.

Lt. Col. Derek Wilford, commanding officer of the paratroopers on Jan. 30, 1972, remains vehemently opposed to any apology or reopening of the case. He maintains, "My soldiers behaved according to the very best standards of keeping the peace." In the context of 800 years of Anglo-Irish relations, that comment may be the most damning to emerge from the massacre.