For music historians, the names Bing Crosby and Burl Ives conjure up many different thoughts, yet they had some things in common. They were born six years apart in the 1900s, and both came from very modest backgrounds. Both of them were mostly known as chart- topping music stars, but both also received Academy Awards in film: Bing Crosby for Going My Way, (1944), Burl Ives for The Big Country, (1958). Bing and Burl also had lengthy careers in radio.

Both were also Irish Americans. Bing’s mother was second generation Irish; Kate Harrigan was a major influence in Bing’s life and instilled in Bing a deep appreciation for his Irish roots. Burl’s Irish ancestry came from his two Irish grandmothers, his maternal grandmother being an O'Flynn and his paternal grandmother a White. Burl stated,"I am fortunate both carried with them, and gave me as a little boy, many of the beautiful songs which I know now are of Irish derivation."

Much could be written on these two legends but as we move into the Christmas season and the radio starts to serenade us in our annual seasonal repertoire of Christmas hymns, carols, and songs. Suffice it to say, thought, we are thankful that Bing and Burl left us such a musical legacy of Christmas songs to sing along to. Bing, of course, is almost solely known for his Christmas music these days. Forgotten is his great early jazz years, radio and film stardom and his place in history for the first to utilize tape-recordings through Ampex. Still, his Christmas legacy is significant. In Christmas in the Charts: 1920-2004, author Joel Whitburn sums up the book with five charts:

Artists with most chart entries: Bing Crosby is #2

Artists with most different albums: Bing Crosby is #5

Albums that charted most consecutive years: Bing Crosby is #3

Albums with most chart entries: Bing Crosby is #1

Albums with most weeks at #1: Bing Crosby is #2

Crosby’s first holiday recording began in 1934 when a missionary priest came into the office of Crosby Enterprises seeking some sound equipment to record a narration to a film they had just made. Larry Crosby, Bing’s brother, agreed to let them use the equipment and also talked Bing into singing “Silent Night” and “Adeste Fideles” for the track. These recordings led to Bing’s studio recordings of the songs in November 1935 and “Silent Night” became a hit single.

“Silent Night” was the beginning of Crosby’s reign on Christmas, but it was with “White Christmas” in 1942 that would put him forever into the 'Christmas Hall of Fame.' It became the best-selling record of all time. Going My Way with Crosby and Barry Fitzgerald was the movie that Irish America quickly came to associate with Christmas. In fact, I was named after Barry Fitzgerald, and I never even heard of It’s a Wonderful Life until after I moved out of the house.

Crosby even took us into his home for his family Christmas specials in the 1970s, which were quite successful family viewing. In his last Christmas piece, he connected with a younger generation with his wonderfully sentimental duet with David Bowie, “Peace on Earth / Little Drummer Boy,” which was taped a month before Bing’s death and aired only a month after his passing. 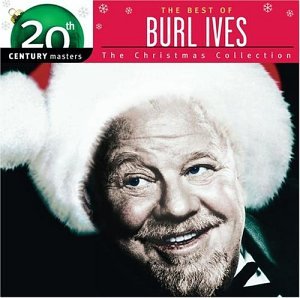 Burl Ives took a longer route to get to his Christmas hits. In the early 1960s, Burl was experiencing a revival of sorts. He had hits with “A Little Bitty Tear” in 1961 and “Funny Way of Laughin' ” in 1962.

In 1964 Burl Ives was asked to narrate the CBS-TV presentation of the Rankin / Bass stop-motion animated family special Rudolph the Red-Nosed Reindeer. In his role as Sam the Snowman, Ives sang "A Holly Jolly Christmas" and "Silver and Gold," which became Christmas standards. He also recorded the title song, too, which was originally a hit in 1949 by Gene Autry.

Both Bing and Burl made significant contributions to our Christmas repertoire of songs. The sentiments in these songs range from the joyfulness of the season to its more melancholy affects. Bing and Burl sang all their songs with complete sincerity, and I’d say it’s a sure thing that folks will be listening to them both for generations to come, especially this time of year.

For some video to accompany the Blog go to this post:

I saw this when they aired it  -  very  impressive !!  Der  Bingle  was  just  what I had known and heard him to be and sound like, didn't  mis a step or  beat.   Watching  David Bowie, I  had the impression  he showed  great  respect  for  Bing Crosby  and  seemed  set  to  give a performance  fit to compliment Bing Crosby's style of singing. >>

Loved both of these characters... Burls Ives  ' Little bitty Tear let me Down'.. evokes so many memories for me..That you for that