Betsy Gray -- Irish Joan of Arc and Heroine of '98 Rising

A heroine, beyond any doubt, our own Irish Joan of Arc, was Betsy Grey,  a folk hero to all of Ulster, with both loyalist and republicans claiming her as their own. She was a Presbyterian, with links to the United Irishman, a nonsectarian revolutionary movement, as were her father, brother and her fiancé, William Boal.

Her father was Hans Gray, a widower, a prosperous north Down Presbyterian farmer. The United Irishmen was in its early years intent on bringing before parliament a bill to reform the Irish parliament and set Ireland on its natural path towards a republic. The harsh Penal Laws had been put in place to punish anyone who was Catholic, or Presbyterians disloyal loyal to the Crown, and they had taken its toll on the whole of Ireland. Both Catholic and Presbyterian were united in their efforts to free themselves of the shackles of domination by the Crown.

The Penal Laws were, as Edmund Burke, notes, ”a well-oiled machine of elaborate contrivance. well suited to the degradation, impoverishment, and oppression of the Irish people, predominantly Catholic,”  but used to bully, harass, and intimidate those of the Presbyterian faith who were ‘not loyal’ to the Crown.

Betsy, ever-present at her father’s side in all of this rebellious discussion, was known as a beautiful, talented young woman, whose beauty was only matched by her kindness, thought and care towards others. She had been raised to be a Lady, cultivated and very aware of the poverty and deprivation in Ireland for Catholics, as well as the need to unshackle Presbyterians from the penal laws. Betsy did whatever she could to aid and support the poverty-stricken in her hometown. With her understanding of the United Irish organization, she was well versed in the struggle to gain Ireland freedom  An expert horse rider and highly educated, she as able to participate in any conversation. Many suitors sought her hand in marriage; however, it was William Boal, a member of the United Irishmen, and friend of her brother’s and father, who stole her heart.

The Society of United Irishmen created a military structure, with elected officers. The elected leader was Theobald Wolfe Tone. Within this organization, there was some evidence that supports a parallel organization for women, called "The Women of ’98." However, there is no evidence that Betsy Gray was a member. Some historians have suggested, and folklore would have it, that, she was indeed a member of the United Irishmen with her father, and was privy to its plans. AThe society had contemplated fomenting a rebellion for some time, with plans finally put in place for a nationwide rising. Tone had gone to America and France to secure aid and support for the cause. However, while Tone had secured the aid from France, it not arrive in time for the rebellion, because the Crown forces learned of the plot.

Knowing this, Crown forces arrested Rev. William Steel Dickson, from the United Irishmen in County Down, who had taken Wolfe Tone’s place while he was away in France. With this arrest, another man, named Henry Munro, a linen merchant and gentleman, had taken his place, with dire consequences, as he lacked military experience.

Way too late, Munroe was alerted that British garrisons with several cannon had converged on the hills surrounding Ballynahinch County Down. Irish forces in Ballynahinch were now hemmed in and far better equipped to battle the thousands of inexperienced Irish insurgents. The battle of Ballynahinch started much sooner than Irish forces expected, leaving the United Irishmen untrained, disorganized and poorly equipped to do battle with the Crown forces.

While Tone was sailing from France with the French consignment of cannons and men, unknown to Tone the battle at Ballynahinch started the night of June 12, 1798. (Some sources say June 9.)  The United Irishmen suffered heavy losses. When nightfall came on the 12th of June, a pause in the battle commenced. However, Munroe now acting leader of the insurgent forces, refused to take advantage, believing to do so would be unchivalrous.

The Crown forces took advantage of this delay, so that as dawn broke on the 13th, the Crown forces pounded the town with cannon fire and attacked Ballynahinch from two sides. Betsy Gray, along with her brother, fiancé, and father, rode into battle with swords drawn, alongside Munro and McCracken.

Betsy Gray had her hand cut off by a swordsman of the British forces, while trying to protect her fiancé. Confusion broke out among the United Irishmen, and instead of advancing they retreated. The Crown forces took advantage by turning this retreat into a massacre. Sixty-three houses were burned to the ground, with raids taking place all over the town. More than 400 United Irishmen were slaughtered, so that by July most of the rebellion had been crushed.

Gray died either during the battle or during the retreat. Some sources would say she was decapitated, others that she was imprisoned with her brother, father, and Boal, her fiancé, before all were executed. Whichever source is true, there is no hiding the fact that she was a very brave woman of that era, fighting for Irish freedom. Munroe escaped, but was betrayed by a farmer whom he had paid to hide him. He too was executed. 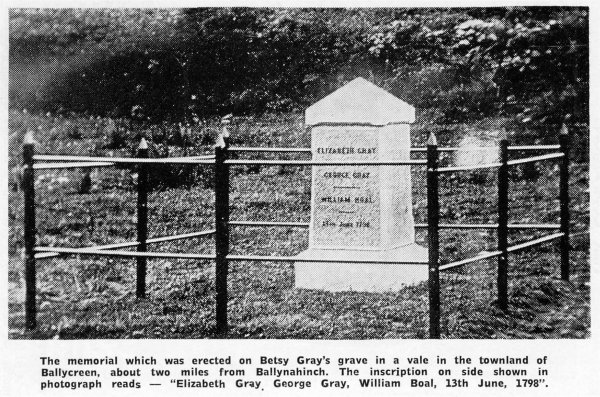 The French did not land in Ireland until August 22, where more rebellions took place, but that is another story.

On October 12, Wolfe Tone was on board the Frigate ‘Hoche' but refused Napoleon's offer of escape before the battle commenced and he was captured at Buncrana, County Donegal, and dies in British custody a few hours before his scheduled execution.