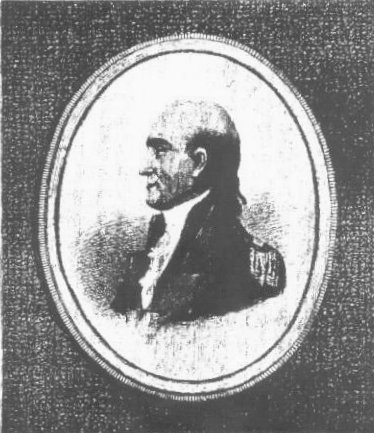 Edward Hand was born in Clyduff, County Offaly, Ireland, on 31 December 1744 and was baptized in Shinrone.  His father was John Hand, a descendant of the Mag Fhlaithimh family which translates: Hand.  Edward completed his schooling with a medical certificate from Trinity College, Dublin.

In 1767, he enlisted as a Surgeon's Mate in the 18th Royal Irish Regiment of Foot and on 20 May, sailed with the regiment from Cobh, County Cork.  He arrived at Philadelphia on 11 July and in 1772, he was commissioned an ensign.  He marched with the regiment to Fort Pitt on the forks of the Ohio River at Pittsburgh where he served until 1774.  He returned to Philadelphia, resigned his commission, and received a regular discharge from Ireland.

In that same year, he moved to Lancaster, began a practice as Physician and Surgeon and on 13 March 1775, he married Catherine Ewing. At the time, Lancaster was one of the earliest Irish settlements in Pennsylvania.  As a people, they were well known for their anti-English and revolutionary convictions.  Edward was active in forming the Lancaster County Associators, a colonial militia.

(Below: "The Battle of Bunker Hill" by Don Troiani.) On 14 June 1775, the United States Army was born as the Continental Congress formed the first Continental Army.  On 25 June, Edward entered the Continental Army receiving a commission as Lieutenant Colonel in the 1st Pennsylvania Regiment, second-in-command to his fellow countryman, Colonel William Thompson of County Meath. The regiment was sent to Boston and on Prospect Hill the following August, the men began to fortify the area with a redoubt like the one placed on Breeds Hill on 17 June.  Over the next nine months, the men stationed at Prospect Hill sustained multiple attacks from the British cannons stationed on the north and west sides of Boston.  Edward was promoted to full Colonel in 1776 and given command of the 1st Continental Regiment, designated the First Battalion of Pennsylvania Riflemen, which became famous for its exploits during the war.  On October 12, 1776, Col. Hand was indispensable in delaying the British attempt to land on Throgg’s Neck in The Bronx to flank Gen. Washington and the main body of the Continental Army on Manhattan island.  Amazingly, he and 25 patriots managed to defend against 4,000 Royal troops, blocking the landing long enough for Washington to move his army to White Plains and avoid being surrounded.

(Below: "Artillery of Independence, Siege of Yorktown, Virginia 1781" by Don Troiani.) 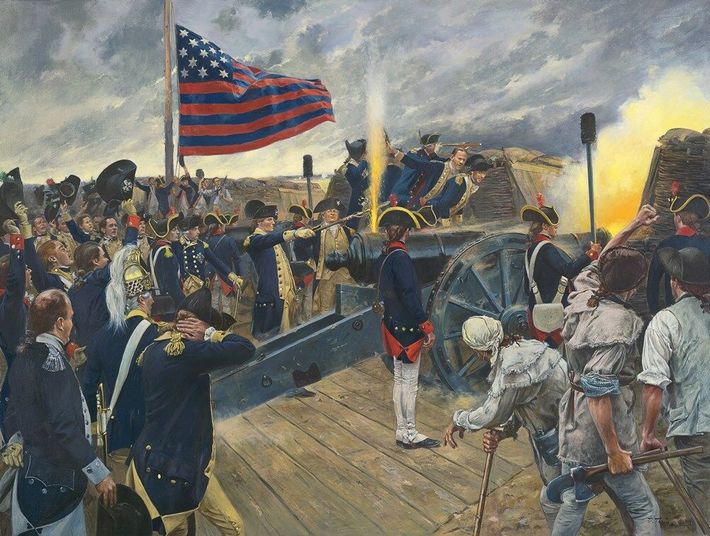 Colonel Hand was promoted to Brigadier General in March 1777 and served once more at Fort Pitt, this time as commander, fighting British loyalists and their Indian allies.  He was recalled, after more than two years to serve as a Brigade Commander in Major General La Fayette's division. He rose to the rank of Adjutant General of the entire Continental Army and served during the siege of Yorktown.  In recognition of his long, distinguished service, in September 1783 he was promoted, by brevet to Major General.  He resigned from the Army in November 1783, after becoming an original member of the Society of the Cincinnati, the nation’s oldest patriotic organization, founded by officers of the Continental Army at Newburgh, NY, in May 1783. Its mission is to promote knowledge and appreciation of the achievement of American independence and to foster fellowship among its members.

After the Revolution, General Hand returned to his estate, Rock Ford, in Lancaster, Pennsylvania and resumed the practice of medicine.  A Federalist, General Hand was active in civil affairs, holding posts that included: Chief Burgess of Lancaster, Presidential elector, Delegate to the convention for the 1790 Pennsylvania Constitution, Member of the Congress of the Confederation and member of the Pennsylvania Assembly.  He lived on and operated Rock Ford plantation, a 177-acre farm on the banks of the Conestoga River, a mile south of Lancaster, until his death in 1802; he is buried in St. James's Episcopal Cemetery in Lancaster, the church he had served as a deacon.  His Georgian brick mansion remains today and the farm is a historic site open to the public.  He was a major contributor to the independence of his adopted Country and was held high in public esteem.  As a physician he was venerated, in private life he was respected and beloved and he died lamented by all who knew him, especially by the poor, to whom he gave free medical aid.  His name and and fame survive in the history of his country. One of his proudest possessions was a letter from General Washington which reads as follows:

(Below: George Washington by Don Troiani.) 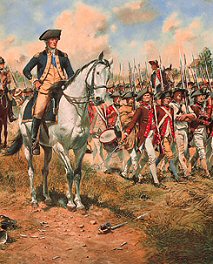 Dear Sir: When I left Philadelphia, I hoped to have had the pleasure of seeing you at Annapolis, before my departure from thence, and to have had an opportunity (previous to my resignation) of expressing to you personally, amongst the last note of my official life, my entire approbation of your public conduct, particularly in the execution of the important duties of Adjutant General. Notwithstanding I have been disappointed in that expectation, and have it now in my power-only as a private character-to make known my sentiments and feelings respecting my military friends; yet, I cannot decline making use of the first occasion, after my retirement of informing you, my dear sir, how much reason I have had to be satisfied with the great zeal, attention and ability manifested by you, in conducting the business of your Department; and how happy I should be in opportunities of demonstrating my sincere regard and esteem for you. It is unnecessary, I hope, to add with what pleasure I should see you at this place, being with great truth, my dear sir,
Your real friend and most ob't serv't,
G. WASHINGTON.