A View From the 'Sandy'-Shattered 'Irish Riviera'

When we interviewed Kevin Gleeson in January, he described his upbringing in New York City's Borough of Queens as distinctly more Irish than American. Last Saturday, Kevin joined a small army of volunteers, striving to help the borough's Rockaway residents restore some sense of normalcy to their existences, shattered, as were their homes, by Hurricane Sandy. The experience brought back memories of his childhood there, along the so-called "Irish Riviera." In an account shared with Hell's Kitchen, Kevin recalls that long, exhausting day, working and watching Americans come together to help rebuild the neighborhood.

Rockaway Beach -- I always knew the Rockaways were an Irish haven. As a kid, we would take the bus down from Woodside with plastic pales and shovels and wildly make plans for the castles and tunnels we were going to build together. We ate many a sand-filled sandwich on its shores. Many a visit to change suits in the relief station at Beach 116 and many hours standing on line, sun-burned, waiting for the bus ride home.

Saturday I answered a request for help in the Rockaways. Not someone I know very well at all. Just someone who lives with his wife and four children in Rockaway and suffered terrible storm damage to his home from Sandy. I drove south on Woodhaven Boulevard.

At Howard Beach / Ozone Park, electricity goes out and flags and signs go up. “FEMA help us.” Large dumpsters are everywhere. Gas stations are taped closed. Police at traffic lights. At Broad Channel a row of dump trucks a mile long and piles of cars that floated away. Emergency vehicles of every kind. Backhoes, front end loaders, bobcats loading out building materials. Wood, glass, wallboard, sheeting. But also kids' toys, like dolls and little red TYCO cars. Garbage stuck neck-high in chainlink fences showed how high the water had risen. The library with a hundred bags of wet books out front. Pet stores without power or pumps. Pharmacies with damaged roofs. I shudder to think what happened the night of the flood.

Cross Bay Bridge brings you onto the peninsula that was Rockaway. Utter devastation. No electric. No gas. No food. No stores. Tens of thousands of homes that sat underwater for a day with water over their first floor windows. The Atlantic waves rolled down the streets four blocks to the bay wall. A day later the waters receded leaving sand, silt and mud in the streets, yards and basements.

Generators with cables running into windows hummed on every block and provided access to the darkened homes. Hundreds of people like myself dressed in demo(lition) clothes, masks, steel boots, thick work gloves, descended into the basements on mud- covered stairs. I had to conceptualize that the water had risen above my head, above the ceiling and halfway up the first floor. Flooring, tiles, bricks, door saddles needed to be chopped out of the mud and placed into large cans and carted out to the street one-by-one by dozens of volunteers. It smelled like the ocean downstairs. Sump pumps, flat pumps and wet-vacs worked constantly. Within minutes, I was soaked in wet mud, head to toe. I would be for the whole day.

(Below: Damage from Hurricane Sandy at Mantoloking, NJ.) 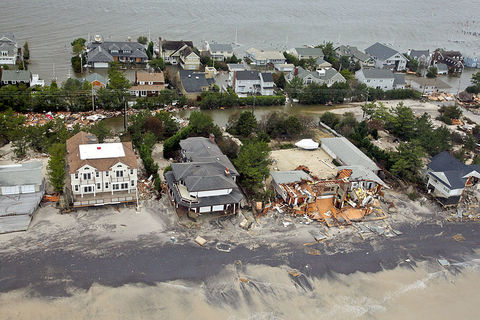 We came at first light and worked till sundown. Professional demo crews, plumbers and electricians worked with volunteers to cap off gas, water and power lines so the homes were safe when services were restored. With tools and experience in demo and construction, I disconnected and took out toilets, sinks, showers, gas dryers, washing machines, air vent units, counters, cabinets, walls, floors, ceilings, electrical fixtures, insulation, everything basically except framing and studding. I used crowbars and sledge hammers all day. The trips up the stairs all day, with hundreds of pounds of stuff, left me dizzy as I went from dark to light outside and plunged back down into the dark, wet basement. As I removed plumbing, sewage water flooded back in, vacating the house pipes. We worked in that all day.

Outside, people had prepared meals of fine sandwiches, apples and pretzels with hummus. There was beer, wine, soda, coffee. We ate, we laughed, we worked. Bobcats and front- end loaders in the street worked all day removing the mountains of refuse we kept piling in the streets. This operation would be completed by every house, on every block, on the peninsula. A friend who lives there told me that, for awhile, under the tide, Rockaway did not exist. Just roofs sticking out of the water from the ocean to the city.

We made our way demoing the staircase walls to the first floor. Crews had been up there all day, removing flooring, water heaters, plumbing, kitchen cabinets, bookcases. The homes, most built in the 1920s, have walls made with horizontal wood strips called lathing, which act as a base for the plaster applied on top and between them. Behind that is a metal mesh screen hung ceiling to floor, nailed to studs, and into which concrete has been imbedded. A pencil mark (above waist-high) indicated the water line. Everything below that line came out.

Saws cut the steel and concrete and then hammer, sledge and crowbar, by force, removed the walls. The dust and smoke and smell were intense. The weight of the buckets were intense. Dozens of trips out the front hall and down the stairs to the street provide a workout gyms can only imagine. I was flattered when the demo crews asked me if I did construction as I “had talent.” As a young man, I had worked years of construction and demolition.

Someone called a “break” and $180 worth of pizzas were out back with beer and sodas. Again we laughed and ate and talked. Black. White. Asian. Hispanic. Gay. Straight. Male. Female. Conservative. Liberal. Block after block. Mile after mile. Day after day.

Best wishes to all suffering hardship as a result of Sandy - and what a laudable effort is being made by the likes of Kevin. Good man yourself.

As suggested I have read William Gleason’s article in the aftermath of Sandy.  Clearly Rockaway was badly hit by Sandy.  While I was in New York in the seventies and meant to go to Rockaway I never quite made it.

We in Ireland were threatened with the storm but happily it missed us but it did hit the South of England and North Europe.

Sandy means something different to me.  You see a stray dog was adopted by a local family and called Sandy.  Sandy was very friendly and was very popular in our area.  When anyone from the area was going to the local super market Sandy usually tagged along.  Reaching the super market Sandy helped himself to a packet of biscuits and scarpered as quick as he could.

In 1986, Hurricane Charlie hit Ireland without warning.  This was the worst storm Ireland experienced in living memory.  Since then every storm is a Hurricane Charlie until it is proved otherwise.  An old saying states that a coward dies a thousand times.

I see that the web contributor to the Sandy website was Kevin Gleeson rather than William Gleeson as previously mentioned by me.

In mentioning Sandy very serious damage resulted from Sandy.  It is good that Kevin and all the other helpers did what they could to minimise the damage caused by Sandy.