A 1631 Raid on West Cork: When Barbary Pirates Came To Prey 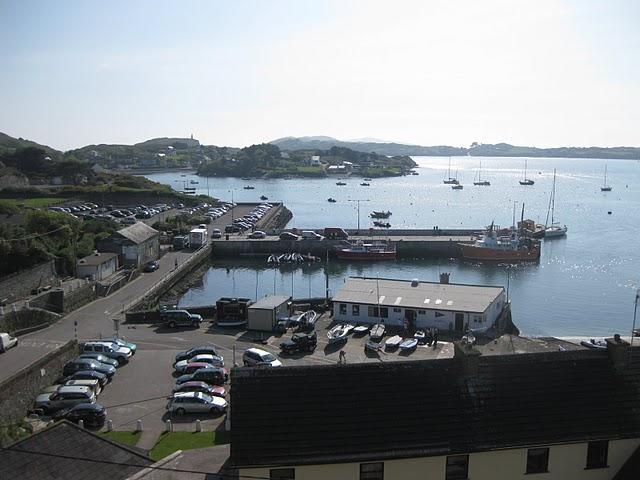 BALTIMORE, COUNTY CORK, Ireland  — On the hillside above the town of Baltimore, faint sounds drifted toward William Harris, sleeping soundly in his bed. It was 2 a.m. when Harris awoke to the noises. The date was June 20th, 1631.

Looking from his window toward the lower part of the town known as The Cove. Harris could hardly believe his eyes men, women and children ran screaming through the narrow streets pursued by fierce-looking men dressed in red. Harris was in shock: The Turk was in Baltimore.

The quick-thinking Harris grabbed his musket — he stood no chance against trained killers but he knew he must try something. He fired into the night sky as quickly as he could load. Guessing his intention, a neighbor on the hillside started to beat a military tattoo on a drum. Below them in the Cove, the mixed force of Janissaries and pirates paused in their work of ransacking the village.

Their intelligence had told them that there was no military in the area, and yet the sound of musket fire and the drumbeat suggested differently. Reluctant to risk confrontation with a military force, the invaders retreated to their boats, taking 107 men, women and children destined for the slave markets of Algiers. The total would have been higher but for Harris.

Questions lingered then, and now: Who were these slavers, and what were they doing in the small fishing town of Baltimore on that fateful night 380 years ago? How did pirates based in North Africa, more than 1,000 miles away, come to select the Irish coast as a hunting ground? What fate awaited the misfortunates that were carried away that night destined for the slave markets of Algiers.

The west coast of Cork is a wild, rugged land with hundreds of small islands and hidden bays. In one of these bays lay the small fishing town of Baltimore, which is dominated by the castle of the O'Driscoll clan. The castle is known as Dun Na Saéd, 'the castle of the jewels,' in English. The once-mighty O'Driscoll star was waning as they had sided with Irish rebels who, aided by the Spanish, fought their English overlords at the battle of Kinsale. The leaders of the ill-fated rebellion left the country in what became known as "The Flight of the Earls." The remaining Irish rebels faced ruin from an enraged monarchy in England. However, the wily Fineen O'Driscoll would exhaust all his resources, and even renounced his Gaelic title, to keep possession of his land and avoid the wrath of the crown.

The now impoverished O'Driscoll chief leased the town of Baltimore for 21 years to a certain Thomas Crooke. Crooke was a Calvinist from England who wanted to bring his followers to Ireland to escape religious persecution. He brought a large group of settlers to the area. They brought modern methods to preserve and export fish. Their settlement thrived. However, the leader of the new settlers made powerful enemies. There were accusations that Crooke and his followers aided pirates who frequented the area. One particular enemy was a powerful local merchant called Walter Coppinger, who also felt that he could lay claim to the town of Baltimore.

West Cork at the turn of the 17th century was a lawless, remote area whose rugged, irregular coastline made it a haven for pirates. The O'Driscoll clan themselves often intercepted shipping passing by. The establishment in England often accused the locals of colluding with pirates — indeed pieces of eight and Spanish doubloons were commonly used as currency in the area. A local official, Sir Richard Moryson, lamented "the continual repair of pirates to the western coast of the province." In his book "Settlers and Pirates," J.C Appleby comments on the situation. "Sailing in large well-armed and well-manned fleets the pirates terrorized the main shipping lanes of Northern and Western Europe." Appleby goes on, "The twin pillars of this rash of maritime disorder were the safe bases that the pirates found in North Africa and South-West Ireland."

The pirates that came to raid Baltimore were led by Morat Rais, born Jan Jansen in Holland in 1570. A privateer for the Dutch, Rais, or so some believe, had the misfortune to encounter Barbary pirates off the island of Lanzarote. Captured, he turned "Turk," that is, converted to Islam, and applied his trade from the Barbary Coast. The Barbary Coast then comprised modern-day Algeria, Morocco, Libya, and Tunisia. Rais rose through the ranks of the pirates, a workplace where promotion was based on merit and went on to become an admiral in the pirate fleet.

The pirate crews were primarily interested in profits, but their interpretation of Islam certainly helped them salve their consciences. While they stoutly believed that the Koran forbade them from enslaving fellow Muslims, non-Muslims were fair game, they believed.

Rais was an audacious leader, once even sailing into his old home port of Veere in Holland. infuriating Dutch authorities. However, due to a freshly signed peace treaty between Holland and the pirates, the Dutch were powerless to act. Rais provisioned his ship and happily went on his way. Rais and other renegades like him brought knowledge of deep-sea sailing to the Muslim fleets of the Barbary Coast. Emboldened by European technology and skills, the corsairs roamed further out into the Atlantic.

Rais' daring can be further seen from his raid of Iceland in 1627. Rais led a combined force of more than 300 soldiers and pirates on a devastating raid on the island of Heimaey. Unlike in Baltimore four years later, there would be no interruption to the terrifying work of the pirates. The pirates slaughtered men, women, and children, keeping those who would fetch the highest price in the slave market of Algiers. The Iceland raid netted more than 400 future slaves from all over Iceland and resulted in nearly 50 casualties among the islanders.

It is believed, however, that Rais was looking for a way out: There had been other high-profile cases of pirates offered pardons in an attempt to control their menace. Rais would have been familiar with the exploits of Englishman Henry Mainwaring, who went from admiralty sailor to pirate and back again, ending his career as an ambassador. Rais entered into talks with English representatives, but they failed because when the English in 1630 reached a détente with the Spanish, the Treaty of Madrid, Rais felt betrayed, and sought revenge by launching the most audacious Islamist raid ever against British interests.

'To the Shores of Tripoli': Lt. Presley Neville O'Bannon

The O'Driscoll Clan and Baltimore (Blog)

James Doherty is a Waterford-based writer who focuses on the preservation of the history of the Irish worldwide.

Copyright © 2011 by James Doherty and GAR Media LLC. This article may not be resold, reprinted, or redistributed without prior permission from the author. Direct questions about permissions to permissions@garmedia.com.