The Wild Geese Facebook page surpassed the 3,000-follower mark on Monday, June 3rd.  In anticipation of this milestone, we began a members-only daily trivia competition back on May 15th.  For almost three weeks, participating members answered trivia questions from categories such as Irish geography, history, sport, language, and music.  Some were more difficult than others, but only one question stumped them all -- the question posed on Sunday, May 19th: 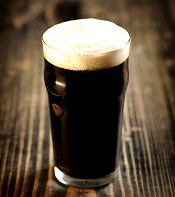 Everyone who submitted an answer to this question came back with a name familiar to millions across the globe: Arthur Guinness.  Understandably so, but it was another Irish beer pioneer -- James Farrell -- who gets the credit for being the first to introduce the black stuff to Ireland.  To see all the questions and answers from the competition, you can head over to the competition page.

The competition was intense, with a good bit of drama building toward the end.  In a key turning point, Catherine Farrell submitted the only correct answer to the following question on Thursday, May 30th:

Dearbhfhorghaill, wife of 12th century King of Bréifne, Tigernán Ua Ruairc, is buried in Mellifont Abbey (County Louth) facing west instead of the traditional east. Why is this?

We received a good bit of detail from competitors about the life and accomplishments of Dearbhfhorghaill, but only Catherine mentioned the seminal moment in her life (and in the history of Ireland) which perhaps defines her legacy the most down to this very day -- that being her elopement from Ua Ruairc's (O'Rourkes) castle in Bréifne with the King of Leinster, Diarmait Mac Murchada in 1152, which was one of the events leading to the Norman invasion in 1169.

Catherine's correct answer to this question jumped her from second place up to a tie for first place with Rose Maurer, and these two would stay locked in this tie throughout the rest of the competition.  Since Catherine Farrell was alone in answering the May 30th question correctly, this served as the tie-breaker.  Here are the final standings, and the special badge which will be awarded to the first, second, and third place contestants for proud display on their profiles:

So, it's first place for Catherine, second place for Rose Maurer, and third place for Fran Pultro.  Coming in with honorable mentions are Janet L. Lloyd, Maire Flynn, and Mary Ellen Jacobs.  Here are photos of the prize packs which will be sent out to our top three finishers.

Additionally, as a special thank you and "Well done!" to our three ladies who finished in the fourth, fifth, and sixth positions, we'll be sending each of them the limited edition The Wild Geese Brooch.

Congratulations to all the winners!  Please send your mailing addresses to Tiffany Silverberg who will send your prizes along promptly.  All prizes must be claimed within seven days.

The Wild Geese team wishes to thank everyone who participated in this special members-only competition as we celebrate welcoming our 3,000th Facebook follower into the fold.  Be on the lookout for more competitions with great prizes and sweet swag up for grabs.WG

Congratulations to all six of you ladies who finished atop the standings!  Well done by all who participated.  I hope everyone learned something (or many somethings) they did not previously know about Ireland.  I certainly did!

Thank You for all of the interesting questions.   I enjoyed the questions immensely and learned a thing or two!

Winners, please be sure to take note of the instructions above on how to claim your prizes.  Simply click on Tiffany's name there in the second-to-last paragraph and you will be able to send her a private message with your mailing address.

Comment by Catherine Farrell on June 4, 2013 at 11:00am
Thank you so much! I really enjoyed all of the questions....still not quite sure how I could have missed the question with "Farrell" for the answer!

I enjoyed the challenge! Thank you for doing this contest.  PS, I had the May 19th answer, too, Catherine Farrell! Thank you for the prize, it is beautiful, and I will wear it proudly!

The items are all very cool!

Fran, I'm thrilled you received and are enjoying the prizes! We'd love to hear your review of any or all of the items! Thank you SO much for following up!!