Some Highlights of the Irish in America's Civil War

This is not meant to be a comprehensive list, there's much more than could be added. Give us your additions to it. Also links here to articles related to some of the people, units, and battles that are mentioned.

May 1861 – The 15th Arkansas Infantry Regiment is organized under the command of Cork born Irishman Patrick Cleburne, who had enlisted in the militia as a private in the “Yell Rifles” before the war.

March 4, 1862 – Patrick Cleburne is promoted to brigadier general in the Confederate army.

May 31 and June 1, 1862 – Irish Brigade fights at the Battle of Fair Oaks during the Peninsula Campaign.| 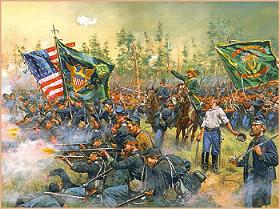 June 27, 1862 - Irish Brigade fights at the Battle of Gaines Mills during the Peninsula Campaign.

July 1, 1862- Irish Brigade fights at the Battle of Malvern Hill during the Peninsula Campaign.

August 29–30, 1862 – Patrick Cleburne commands his brigade at the Battle of Richmand and is wounded in the mouth.

July 2, 1863 – Irish Brigade fights in the Wheat Field the Battle of Gettysburg.

September 19–20, 1863 Patrick Cleburne commands his division at the Battle of Chickamauga.

November 27, 1863 – Patrick Cleburne and his division protect the retreat of the Army of the Tennessee to Atlanta at the Battle of Ringgold Gap.

November 30, 1864 – Patrick Cleburne is killed commanding his division at the Battle of Franklin.

I always find it interesting who gets "forgotten" whenever the Irish contribution to the Union cause is mentioned. Of course, the Irish Brigade is ALWAYS given boatloads of attention. Josey's Regiment of Arkansas (the first of three 15th Arkansas regiments) is only incidentally "Irish" given that it was under the command of an Irishman during part of its existence.

I was not at all surprised to note that, once again, the 1st Irish of Indiana (35th Indiana Regiment) was quite thoroughly forgotten, even though it even has pages detailing its history on this very web site:

And a recently-published book: http://www.amazon.com/The-1st-Fighting-Irish-Hibernians/dp/1491826770

Bryan, I said at the top that "This is not meant to be a comprehensive list, there's much more than could be added." There are many, MANY other units and people who could be listed. This was just something I put together for Gerry for some bullet points to hit some highlights of the Irish in the Civil War. Then we thought we might as well post it here and put some links off it. The 35th Indiana is definitely a good example of some of the other things that could be included. This list could easily be doubled or tripled in size with other good additions like those you mention.

I tend to be prickly about this because there are books after books after shelves after libraries on the "Irish Brigade", and I would not be surprised if I couldn't finish watching all the documentaries on them before the end of my days. But who else gets noticed?

I don't know how to join the Blue, Gray and Green but I have researched and written a book, "The Civil War's Valiant Irish"

available in softcover from Amazon as well as on Kindle and Nook.  It covers the events you have above and much more including Father Corby, Meagher, Nugent, O'Rorke, Mahone ,,, as well as over 35 battles. I believe if your're Irish & a Civil War Buff this is one book that should be on your shelf.