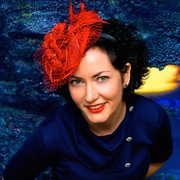 The joy of song at the meeting will be provided by Tara O’Grady, a New York native with Donegal roots, who combines Celtic, folk, blues, swing, and especially jazz in her singular style.

Tara has been awarded the Irish Voice’s Most Influential Woman Award in 2010 and appeared on its top albums of 2013 list.  Critics have compared her soulful, lilting voice to legends like Ella Fitzgerald, Billie Holiday, Aretha Franklin and Patsy Cline.  Her recording of Danny Boy was featured in an award winning BBC documentary film celebrating the song’s 100th anniversary.

Tara as a singer-songwriter has three CD releases:  Black Irish (2010); Good Things Come to Those Who Wait (2011); and A Celt in the Cotton Club (2013).  Her original songs and unique renditions of Irish standards can be heard on radio stations across America.  Tara O’Grady’s itinerary can be found on her web site: www.taraogradymusic.com.  That itinerary will include her appearance on the stage of the Garden City Library.  All are invited to see her in person on December 10.

This seems likely to fill up ... fast! Recommend arriving early. We ARE.