See 'The Yank' with The Wild Geese in NYC 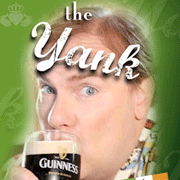 An evening at the movies with The Wild Geese in NYC and The Yank!

A chairde, start gathering your friends: The 8th Annual Manhattan Film Festival will be screening The Yank, a comedy, at Quad Cinema on Monday June 23 at 5 PM Eastern.

Let's get together and show our support! Join us for dinner afterward at Central Bar, a brisk 10-minute walk way, at 109 East 9th Street. Info about that venue is available here.

The Yank, independently written, directed, and produced by Sean Lackey, has been described as "'Sideways' meets 'The Hangover' ... with an Irish flare."

Shot on location in Cleveland, Dublin and County Clare, "The Yank" tells the story of Tom Murphy, a middle-aged Cleveland bachelor. For Tom, "the perfect woman" is beautiful, hard-working, family-oriented and (like his parents) 100 percent Irish. So when his best friend, Marty, decides to get married in Ireland, Tom's family and friends send him off on a side- splitting epic adventure. Tom does not know it yet, but he's about to come face to face with the real Ireland!

It's a movie that most Irish Americans are certain to relate to in some way -- and find themselves in at least one character.

Do you want to meet up with your fellow NYC Wild Geese to support this event?