Zorro Returns to Wexford This Weekend William Lamport (Guillén de Lombardo) - "The Irish Zorro", who managed to strangle himself just before he was to be burned at the stake in Mexico City

ZORROFEST spices up Wexford this Bank Holiday Weekend
Wexford will be sizzling hot this May bank holiday weekend as the town gives itself over to Mariachi and mojitos! “Que?”, you may ask...

Zorrofest is a celebration of the life of 17th-century Wexfordian William Lamport, the “Irish Zorro”, and the many links between Ireland and Mexico.
Among the many events the renowned Mexican historian Dr. Andrea Martinez Baracs will present her latest book on Guillen de Lampart aka Zorro.
A historical walk will take people on a tour of Wexford places connected to the 17th century.

The creator of Zorrofest is Karla O’Connell-Sanchez Zepeda(wife of Wild Geese member Oisín O’Connell) She reckons that the extraordinary life of William Lamport is too good not to celebrate especially, from her point of view as a Mexican living in Ireland, as it so strongly links Ireland to Mexico. “Who would have ever imagined that an Irish adventurer and poet would be so influential in Mexican history?

His avant-garde ideas and texts set the basis for what was to become an independent nation two centuries after Lamport’s death. A statue is dedicated to Mr. Lamport (Guillén de Lombardo) at the base of one of the most important monuments in Mexico City: La Columna de Independencia?

The life and adventures of William Lamport were arguably one of the strongest inspirations for the story of the swashbuckling caped and masked El Zorro.

It seems that Wexford will be the place to be this May Bank Holiday if you want to sample a real fun-filled “Wex-ican” fiesta! 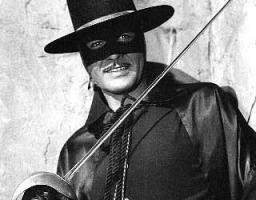 Few comic books characters have grabbed the public imagination as much as  the super hero “Zorro”. We are treated to the Antonio Banderas and Catherine Zeta Jones classic nearly every Christmas and the recent Hollywood blockbuster Puss In Boots, gives prominence to the lothario legend and hero once more. So who was Zorro...and is there any chance that the “Model County” could ever claim him?

A native of Wexford, William Lamport (alias Guillén de Lombardo, 1615–1659) is recognised by many as one of the precursors of Mexican Independence.

Of Catholic “Old English” stock, his grandfather Patrick Lamport was aligned with the Gaelic chiefs against Tudor colonisation and had helped the Spanish around the period of the Battle of Kinsale (1601). Patrick was executed on the orders of England’s King James 1st in 1617 and his grandson William was then entrusted to the clergy to be educated in Dublin and England.

By the time he had celebrated his fifteenth birthday Lamport had already been charged in London with high treason, escaped and spent two years aboard a pirate vessel on which he helped to defeat the English navy at the siege of La Rochelle. By twenty-five he had travelled most of Europe, had been granted a scholarship to the Colegio Imperial in Madrid, and claimed proficiency in no less than fourteen languages. He may even have helped to alter the course of European history at the Battle of Nördlingen (1634).

As an officer in the Spanish army he was reputedly helping Félim O'Neill raise an army for Ireland’s uprising in 1641 but was sent to Mexico as a spy following an affair with a young noblewoman at the court ofPhilip IV of Spain. He was arrested in October of 1642 for plotting a rebellion, the stated aims of which were to abolish slavery and establish an independent Mexican state. (which was a Spanish colony) One of the documents seized during his arrest is said to be the first proclamation of independence ever to have been produced in the “New World”. He was arrested by the Inquisition on the relatively minor charge of having practised astrology and witchcraft.

On the night of December 25th 1650 he broke out of prison in a manner so daring and brilliantly conceived that rumours began to circulate that he had been assisted by demons. That escape, and the pamphlets he posted throughout the city, while on the run, and which exposed the corruption of the Inquisition, made him something of a local legend. Following his re-capture, he spent the best part of the next nine years in solitary confinement, struggling to hang on to his sanity and to maintain a connection to his God by writing Latin psalms on his bed sheet with a chicken feather for a pen and ink manufactured from the smoke of candles collected in honeyed bread that was then diluted in water. By the time it was discovered, his 'psalter' contained no less than 917 'psalms”

Lamport's poetic tirades against slavery and corruption might well have remained amongst the minutiae of history had his story not been been rescued from the teeth of eternal oblivion by the intervention, in1872, of Vincente Riva Palacio. His historical romance  book, Memoirs of an Impostor, is about a hero who he called Guillen Lombardo who protected the Mexican Indians from exploitation by the Spanish and used the letter `Z' as his symbol. In it, Don Guillén Lombardo leads a double life as a poet and dandy by day and a swashbuckling swordsman with an eye for the ladies by night. Riva Palacio's book, however, ensured that Lamport remained of interest to a small circle of Mexican intellectuals, until 1901 when, with the centenary of the Independence struggle just nine years away, and plans to erect a monument to the heroes of the Independence movement already well advanced, a pamphlet was published in Mexico City by one Don Alberto Lombardo. Entitled Historical Injustices – The forgotten man who was first to conceive of, and attempt to gain, independence for Mexico, Lombardo's pamphlet proposed erecting a statue to William Lamport as one of the precursors of Mexican Independence, a statue to the Wexford man that sits today within the mausoleum that lies beneath Mexico City’s huge monument  “Angel of Independence” on the manically busy La Reforma boulevard.

Here few see, and fewer recognise it, despite the towering Angel being probably Mexico's most photographed monument and a favourite stop-off point for party goers on a Saturday night!

His name, however, began to re-surface in the popular media in 1999 following the assertion of an Italian academic (Fabio Troncarelli of Viterbo University) that the Irishman had been the primary inspiration for the creation of the comic book superhero character Zorro in his Curse of Capistrano (published 1919).

At this time the blockbuster film, The Mask of Zorro, starring Antonio Banderas and Anthony Hopkins was being made. Troncarelli's theory was founded upon the premise that Zorro's creator, Irish-American journalist Johnston McCulley, had based his hero on Riva Palacio's Don Guillén Lombardo.

McCulley's and Riva Palacio's heroes, Troncarelli argued,share many similarities in that they both lead double lives, are both ladies' men and lovers of poetry, and are both leaders of a conspiracy of noblemen whose aims are the overthrow of tyranny; they even share ties to the Franciscans. The treatment of Troncarelli's theories in sections of the media led to William Lamport being known as Paddy O'Zorro, Zorro the Irishman, The Irish Zorro etc.

Whatever is the true version of the origins of “Zorro” it is difficult to say. However, the name and deeds of Wexford’s William Lamport, who was said to have been either hanged or burned at the stake in Mexico City’scentral square, lived on and became the inspiration for many subsequent Mexican uprisings until the last (and more liberal) “Spanish” ruler of the colony of Mexico - another Irishman – Lt. General Don Juan O'Donoju accepted Mexican independence in 1821. Fionntán Ó Súilleabháin at El Angel del Independencia in 2007. A lifesize statue of Wexfordman William Lamport stands in the masuleum underneath El Angel