Winfield Scott is well known as the hero of the Mexican War and as the over all commander of Federal forces during the beginning of the Civil War. Few have heard much about his experiences in the War of 1812, however. One 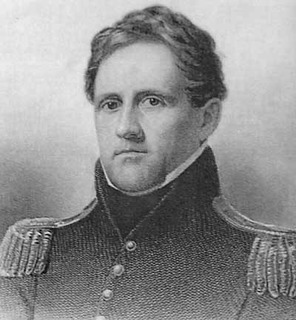 of those experiences involved the Irishmen under his command. Scott (left, in 1812) helped save 23, and perhaps more, Irishmen from execution at the hands of the British.

(Above: Winfield Scott leading troops at the Battle of Chippewa on July 5, 1814 by Charles McBarron, Jr.)

Shortly after the War of 1812 started the Americans began an invasion of Canada. One of the officers who served in that invasion was Colonel Winfield Scott. Also serving in this invasion force were a large number of Irish-born soldiers. On October 13, 1812, the American forces, numbering about 5,000 under the command of General Stephen Van Rensselaer, a political general, invaded Canada from western New York. Only a portion of the Americans got over the river in the limited number of boats available to them in the first wave.

The British were commanded by General Isaac Brock and numbered about 4,000, but they were not all on the scene of the intial action. Those British troops on the scene were outnumbered, but had the advantage of a strong defensive position on Queenston Heights. The Americans did manage to make it up the Heights by using a path up the back side that was unknown to the British, taking the postion. Brock led an immediate counterattack on the Americans, but it was repulsed and Brock was killed. As time passed, however, the rest of the British forces in the area began to close in. Meanwhile the rest of American force, comprising New York state militia units, refused to cross over onto Canadian soil to reinforce the American invasion force, stating they were to protect their state, not invade a foreign territory. Without reinforcements arriving, the Americans' position was perilous. The British rallied and threw them off the heights, inflicting severe casualties and taking about 1,000 prisoners. Among those prisoners was Winfield Scott, along with many of those Irish-born soldiers, as well.

The prisoners were transferred to Quebec and placed on a prison ship. Soon after arriving on the ship, Scott, who was below in a cabin, was alarmed when he heard a commotion on deck. Rushing up to investigate, he found that the British officers were in the process of separating all the Irish-born soldiers they could find from the native-born Americans. The purpose for this was so those men might be taken to England to be "tried and executed for the crime of high treason." It did not matter to the English that many of these men had already taken out U.S. citizenship. English law held that any man born an Englishman (and they held that Ireland was part of England, of course) was an
Englishman for life. They did not believe in naturalization.

As soon as Scott became aware of the purpose of this weeding process, he order all his men to answer no more questions from the English officers. The English had been using surnames and Irish accents to pick those guilty of "treason." In spite of threats, all remained silent and the British had to be content with the 23 unfortunate souls who had already been selected for death. Though he was threatened and repeatedly ordered to go below, Scott refused. The emotions those Irishmen were feeling as they were separated to one side and marked for death must have been very much the same ones many Jews would feel 130 years later, as some Nazi officer selected them to die for no other reason than their race. Going to those whose lives had apparently been forfeited by the spelling of their names and the sound of the voices, Scott told British commanders that if even one of them should be executed the government would avenge them. He also pledged that he personally would retaliate and if necessary refuse to give quarter to English soldiers in battle. (Left: Drawing of a British army firing squad execution of a deserter in Montreal during the war, the possible fate awaiting the Irishmen who were with Scott - Library and Archives of Canada)

Those 23 condemned men were later shipped to England, and Scott was shipped off to Boston and exchanged. Scott hurried to Washington to report the heinous action taken by the English. His report was sent to both houses of Congress and, on March 3, 1813, they passed a law giving the President the power to retaliate if any of the Irishmen should be killed.

Two months later, at the capture of Fort George, Colonel Scott's command took a large number of prisoners and, taking personal retribution, as he said he would, he immediately selected 23 Englishmen to be held hostage to the fate of the 23 being held by England. In making the selections he was said to have been careful not to pick any Irishmen (who were numerous in the British army) so that Irishmen not be sacrificed for other Irishmen.

When the English heard of this they were furious, and there then began an ever-escalating placing of hostages in confinement by both sides awaiting the fate of those 23 Irishmen in England. The English insisted that English law in regard to the "traitors" would be carried out and that if the United States retaliated, they would not only execute two Americans for every one Englishmen, but they would also instruct their Navy and Army to "prosecute the war with unmitigated severity against all cities, towns, and villages belonging to the United States, and against all inhabitants thereof." Of course, to most observers, it may have seemed that the British were already doing their best to "prosecute etc, etc ..." but, be that as it may, and in spite of all their raging, pompous bluster, the 23 Irishmen were never executed.

Although it seems to good an ending to be true, reportedly, one day in July 1815, sometime after the peace treaty between England and the United States had been concluded, Scott (by then a major general) was traveling by the docks in New York City when he heard a loud cheer going up from one of the piers. Investigating, the General was delighted to meet his old Irish comrades from Canada. After more than two years in an English prison, 21 of those 23 hostages made it back to America; two had died of natural causes in captivity. Ironically, 32 years later, it would be Winfield Scott as commander of U.S. forces invading Mexico who would hang 50 members of the San Patricios battalion of the Mexican army, most of them Irish. The circumstances of their "treason" were not much different than those of the Irishmen he saved during the War of 1812, but this time Scott was their executioner, not their savior.

(Right: Hanging of thirty of the San Patricios after the Battle of Chapultepec, by Sam Chamberlain.)

In 1812, however, the United States and England had stared eye ball to eye ball on the "right" of England to execute former English citizens for treason, and the English had blinked. There were many long hard years ahead before the Irish in America would be treated as equals, many times ahead when America and Americans, and Scott himself, would turn their backs on the Irish, or worse. But on this occasion, the U.S. government, and Winfield Scott, had stood behind a race a people who in their long history had seldom experienced the support of any established government -- they had stood behind the sons of Erin.

Thanks, David. An interesting side light to this story involves Raphael Semmes, then serving as a Navy lieutenant with the Marines in Mexico. He had this to say about the fifty death sentences: "These sentences, which would have been appropriate at any time, were particularly so now. .... The salvation of the army might depend upon an example being made of these dishonorable and dishonored men." Of course, 14 years later he would abandon that flag to join the Confederate Navy and became the captain of the CSS Alabama, fighting against that same flag. Luckily for him the US government was much more magnanimous following that war. The only Confederate executed following that was Henry Wirz, the commanding officer at Andersonville.