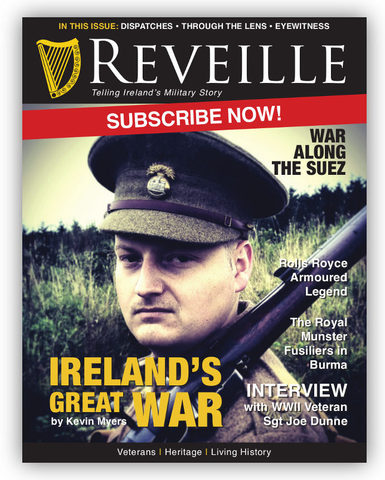 Reveille is an initiative by two former members of the Irish Defence Forces Public Relations Branch, Wesley Bourke and Billy Galligan. The aim of the magazine is to tell all of Ireland’s military past.

Ireland’s military story is global. Ireland is currently commemorating a decade of centenaries. This decade includes the centenaries of: the foundation of the Irish National Volunteers, Cumann na mBan and the Ulster Volunteers, the outbreak of the Great War, the 1916 Rising, and the Irish War of Independence leading to the Anglo/Irish Treaty and Home Rule, and the Irish Civil War. At this time we are also commemorating the bi-centenary of the Napoleonic Wars and the War of 1812, the sesquicentennial of the American Civil War and the subsequent attempted Fenian invasion of Canada, and the 75th anniversary of the Emergency/Second World War. There was not a community in Ireland that was not affected by these traumatic events in history.

These anniversaries have ignited peoples interest in Ireland’s military past. Families and historians around the country are looking back through records to see if a family ancestor or local was a revolutionary or took part in the Battle of the Somme in 1916 or was even a member of the renowned Irish Brigade outside Washington in 1861. The research that is being done by family members and historians alike is invaluable in telling Ireland’s military story.

With only a few military veteran’s, from both the Irish Defence Forces and other armed forces, left alive that served during the Emergency/Second World War it is imperative that we record their stories for future generations. It is by interviewing military veterans that we can bring to our readers firsthand accounts of their exploits. Ireland’s military veterans have an insight into the global affairs of the Cold War that most of us simply cannot comprehend.

Wars in Korea, the Congo, Vietnam, Lebanon and the Falklands are just an example where Ireland’s military men and women found themselves during this period. Following the collapse of the Soviet Union military personnel from Ireland have continued on serving around the world in many armed forces. They have found themselves in conflicts in Iraq, the former Yugoslavia, Africa and Afghanistan.

Giving our readers a further insight into Ireland’s military story we will be brining you reports from the many historical societies, museums, battlefields and Living History groups around the country and abroad. Both at home and abroad historical societies, heritage sites and Living History groups are putting on exhibitions, displays and battlefield re-enactments in order to give the public an insight into Ireland’s military past.

We look forward to bringing you Ireland’s military story.