A frequently asked question on the subject of the Irish settlement in Argentina, is how and why did this settlement take place? There is no easy answer to this question. Like all emigration patterns, there are always a myriad number of reasons why particular groups decided to leave their home country and insert themselves into the landscape of a new country. From an early period, the Irish went to South America as missionaries, while others went there as sea-farers, adventurers and soldiers.

In the early 1800s, Irish settlers in Argentina included merchant sea man William Browne from Foxford in County Mayo, who is credited with founding the Argentine navy. Another man, John Thomond O’Brien who was born in Baltinglass, County Wicklow in the 1780s arrived in Buenos Aires about 1812 and joined a regiment under the Argentine born San Martin – one of the great liberators of Spanish South America. O’Brien proved to be a valiant solider, and in a few short years rose to the rank of Captain and eventually became Aide-de-Camp to General San Martin.

Following Argentine’s declaration of Independence in July 1816, O’Brien continued to be an influential figure in Argentine affairs. In the early 1820s he came to Ireland at the behest of the Argentine government to attract immigrants from Ireland to the Pampas of Argentina, but failed in this task. About 1827 he was given a similar task by the Argentine President Rivadavia who asked O’Brien to recruit 200 Irish sheep herders for the Pampas.

About this time, O’Brien made the acquaintance of two men from Streamstown in County Westmeath, namely, Patrick Bookey and his brother-in-law John Mooney who were attracted to Argentina and the beef industry, following a free trade treaty signed with Britain in 1824. These men subsequently became involved in farming and following O’Brien’s influence, during a return visit to Ireland in the late 1820s, spear- headed the exodus from County Westmeath to the Pampas of Argentina. The news that Argentina was a land of opportunity obviously spread very quickly among the citizens of Streamstown and all the surrounding townlands and parishes – an exodus which eventually extended in triangular fashion from the town of Mullingar to Ballymahon and Newtowncashel in County Longford, northwards to Longford town and environs, to Edgeworthstown (Mostrim) and southwards to parts of King’s County (Offaly).

It is difficult to quantify the precise number of Westmeath emigrants to Argentina, mainly due to the fact that emigrants departed from a number of ports, including Liverpool. Some sources say that about 30,000 people emigrated to Argentina between 1830 and 1870. Of these, it is believed that about 16% were from County Wexford, and about 60% were from Westmeath, Longford and part of Offaly, the majority of the foregoing, being from County Westmeath.

According to Edmundo Murray an Argentine researcher based in Geneva and an ardent student of the patterns of Irish emigration to Latin America – most of these early emigrants were single farmers in their twenties. They were the non-inheriting children of Catholic middle sized tenant farmers. The choices of these men – had they remained in Ireland were limited. They could have joined the church – or gone into the British army. It is easy to see how they were hugely attracted to the rolling farmlands of the Pampas of Argentina – to make their fortunes.

Many of the new emigrants worked as farm laborers and amassed enough money to rent their own land, and eventually to purchase it. Some worked as sheep-herders, availing of a practical system known as halves whereby they formed a type of partnership with the owners. Some of the owners would share with the shepherds, half of the income from the sale of wool while others would share half of the lambs born each season.

Offaly-born William Bulfin – one time editor of the Irish/Argentine newspaper the Southern Cross - in his book entitled Rambles in Eirinn gives an amusing account of his encounter in the early 1900s with some young girls in the turf belt in the heart of Westmeath (somewhere between Moate and Moyvoughley) while enjoying a cycling tour of Ireland. Bulfin’s account graphically underlines the fact that the exodus from Streamstown, County Westmeath and surrounding areas was very extensive.

"I am going to suspend all work in this electoral division, or precinct, or department," says Bulfin to the young girls. I was told by a truthful man up the road that one could not see a soul in this part of the country who has not a relation in Argentina.

On learning that he had come from Buenos Aires, word quickly spread among the turf cutters, who downed tools, sent for all the others..... down from the houses and fields – from everywhere and flocked around the visitor.

"I stayed with them for more than two hours," says Bulfin. "A few of them remembered their Spanish and plied me with it. There were brothers and sisters of men I had met on the pampas, and nieces and nephews and even parents as well.
During the past decade I have visited Argentina many times, and am always thrilled to hear the Irish descendants speak English with Westmeath, Longford or Wexford accents."

Like Bulfin, I have met with countless numbers of individuals in the pampas whose Westmeath cousins are known to me. Many of the Irish descendants have never lost sight of their family in Ireland, while others are thrilled to know that a little family history research on both sides of the Atlantic has the potential to re-connect them with their families in Ireland.

The Irish in Argentina are the largest non-English speaking members of the Irish diaspora. Unlike many of their counterparts in North America and England, most Irish/Argentines have not lost sight of the precise births counties of their immigrant ancestors. To this end, much credit is due to the late Eduardo A Coghlan, the Argentine genealogist who left a wonderful legacy to the Irish/Argentine community through his publications:

In reflecting on this amazing exodus from Ireland to Argentina, one realizes that emigration patterns do not vary much from one decade or century to the next. Throughout the 18th century, and indeed up to the present day, those who decide to emigrate from their home country, often emigrated with family and/or friends from home.. Certainly, throughout the 19th century and earlier, many Irish who settled in North America, emigrated with family and or friends from home and frequently joined kindred folk in America.

It should be stated therefore, that descendants of Irish born immigrants who are having difficulty establishing the birth county of their Irish born ancestor, would be well advised to carry out extensive research of census returns, church registers of baptism and marriage, grave-stone inscriptions etc. in the area where their ancestor first settled, in the hope that crucial information might be gleaned from a source pertaining to their ancestor, or from sources pertaining to his/her family members or friends from home.

Useful sources for Argentine genealogical research, and interesting publications include:

Outstanding work has also been carried out by members of various groups, including the Society for Irish Latin American Studies (SILAS).

Other useful websites and publications include:

In addition to the foregoing publications, microfilm copies of the Irish-Argentine newspaper The Southern Cross are available for research in the local studies section of Mullingar Library, County Buildings, Mount Street, Mullingar, and at the National Library of Ireland, Kildare Street, Dublin 2. 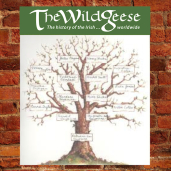 It is nice you have joined this group.  With your permission, I could publish this wonderful article in The Southern Cross. Hope seeing you next trip. Regards Guillermo

Comment by Thomas j shea on August 12, 2015 at 11:12am
Guillermo are u from Argentina boyo? If so what is the real Irish blooded in buenos aires doing to preserve their irishness amongst many of the Latino influences surrounding them, don't get me wrong I truly love our Latino brothers n sisters however, preservation in such a multi ethnic country like Argentina is very important....not only is their irishtnere but of course Spanish, Italian, etc........join Clan na Gael, the realist Irish n real Irish group one can join to free Ireland from British rule, to join go to tommyirish1@yahoo.com to ask to join, only the truest are accepted......

Comment by Thomas j shea on August 12, 2015 at 11:17am
Help us reach 100,000 real Irish men n women to help free Ireland from the British-UK-English monarchy crown etc. or. Whatever they expect to be called today.....join us in the "real clan na Gael" ......the real clan na Gael only except the realist n truest......plead your case at tommyirish1@yahoo.com