The following is a transcript taken from the LIVE members' chat hosted here at TheWildGeese.com on Monday, November 11, 2013 with fellow Wild Geese member, Jim Goulding.  Jim is a resident of Colombia on the South American continent, and an amateur historian in the field of the Irish influence in Latin America.  Some editing has been applied for clarity.

The Wild Geese: Céad míle fáilte, a chairde! So glad to see each one of you who have stopped by for this evening’s LIVE community chat with Jim Goulding. Jim is a resident of Colombia on the South American continent. Our focus this evening is on the influence of the Irish in Latin America.

My name is Ryan O’Rourke, and I’ll be the moderator for our chat this evening.  We’ll now turn it over for the next 30-40 minutes to Jim. Welcome, Jim!

Jim Goulding:  Thank you Ryan, and welcome to all present.

The Wild Geese:  Who has our first question?

Tiffany Silverberg:  Tell us about the initial immigration if Irish to Latin America, if you would. It's a topic I know little about.

Jim Goulding:  Well I have read that there was an Irishman on-board with Christopher Columbus in 1492 when he landed on Hispanola. but really the Irish migration to Latin America happened during the nineteenth century.  Prior to the Great Famine of the 1840s,  Irish people were immigrating to Argentina principally.  There was immigration to Uruguay and to Brazil as well, but mostly to Argentina.

Gerry Regan:  Céad míle fáilte romhat, Jim. What factors would have led an emigrant to Latin America rather than the United States or Canada. For example, did it take more money in pocket to book a ship for Rio or Montevideo?  Rather than New York or Boston or New Orleans.

Jim Goulding:  Yes definitely it cost more to travel to Argentina and most of those who did were from the more prosperous areas of Ireland -- the midlands.  Those early immigrants would travel to Dublin and them on to Liverpool where they would board the bugger sailing ships to Argentina.
bigger that is.

Mary Ellen Jacobs:  Does that trend continue with current immigrants? What seemed to attract them to these areas if the cost to get there was higher?

Jim Goulding:  They went to Argentina for the promise of a better way of life and were lured by the offer of cheap lands and guaranteed jobs and housing. It didn't always materialize, but that was the lure.  In the early 1800s, Argentina had vast areas of unclaimed lands and that was a big attraction.  Immigration to South America from Ireland slowed down at the end of the nineteenth century and pretty much dried up after 1920.

Belinda Evangelista:  Did the cultural identity of the Irish remain strong over time?

Jim Goulding:  Cultural identity always remained strong in the first generation immigrants and even into the second. Interestingly, now, after probably more than 4 or 5 generations of Irish descendants in Argentina there has been a resurgence of Irish identity. 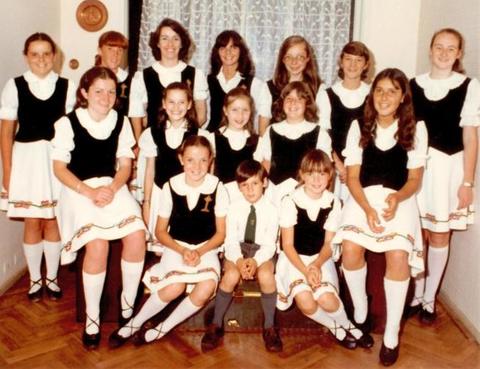 Jim Goulding:  Maybe 15 years ago, I was in New York for St. Patrick's Day and saw a contingent of Argentine Irish with their own band marching in the 5th Avenue parade.  A few years back I was in Buenos Aires for St. Patricks Day and participated in the celebrations -- a small parade, a Mass in Irish and a huge street gathering around the Irish pub section … so much so that they had to close off the streets to traffic.

Ryan O’Rourke:  Jim, would you see many occurrences of Irish surnames still in places like Argentina and Latin America as a whole?

Jim Goulding:  In Argentina yes. In other countries not nearly as much. For example here in Colombia I rarely run into folks with Irish or Irish looking surnames.

Belinda Evangelista:  Do they play GAA sports there?

Jim Goulding:  In Argentina yes they do have hurling and football leagues. Recently an Argentine hurling club was in Ireland for several matches.

Gerry Regan:  Jim, the issue of chattel slavery is one I'm increasingly fascinated, and repelled, by. How did the mestizo and newly successful rebels of these nations, and their newly welcomed Irish confreres, view slavery, which had been encouraged by the Spanish for centuries until the early 19th century?  How the Irish perceived and related to blacks in lands they settled is a subject I'd love to see us explore further on The Wild Geese at some point.

Jim Goulding:  Slavery -- black slaves all came from Africa. But there were as many white slaves who came from northern European countries -- many from Ireland.

Gerry Regan:  Were the white slaves treated better in some way, used as 'house slaves.' Just using the term these days I find appalling.  The Irish in particular, of course.

Jim Goulding:  White slavery proliferated in the Carribbean -- I dare say that a much larger percentage of Black people living in the Carribbean today have Irish blood than we might think.  Often the white slaves were treated worse than the Blacks because the owners would have to purchase the Blacks while the white slaves were indentured for the most part. So the loss of a Black slave was an economic loss.  The loss of a white slave cost nothing and there would be another to quickly fill his place.

Gerry Regan:  Jim, can we get your Irish story? How'd you end up in Colombia? Jim Goulding:  My Irish story -- I came down here almost 40 years ago to study Spanish at a great institute at the Jesuit university in Bogota.  I am an American by birth of Irish immigrant parents raised in the Bronx. Up the Brons!  Of course i met and married my Colombian wife and we lived in the States for many years. We used to visit here every two years or so and then upon retirement came down on a more permanent basis.  I still go back to the states every year and also visit Ireland every five years or so.

Belinda Evangelista:  Tell us about some famous Irish Latinos

Jim Goulding:  Wow -- I am drawing a blank on that one but there are many. The famous Mexican actor Anthony Quinn is definitely well known.  I believe that Vicente Fox, the former president of Mexico is part Irish.

Gerry Regan:  Martin Sheen's father, I believe, was from Spain.

Gerry Regan:  And he adopted his mother's surname for the sake of his acting career.  Shows how branding Irish can be a good marketing move! ;-)

Jim Goulding:  In Puerto Rico there are a number of Irish names still intact.  I knew a family there whose surname was Murray and the pronounced it “Murr aaay.”  Sounded funny to me at first but that was their name.

Jim Goulding:  Back to the slavery topic a bit.  Slavery -- all along the coasts of eastern and western South America there are populations of Black people all descendants of African slaves brought there by the Spanish. The city of Cartagena, Colombia is a most interesting place if you have never been -- a city that has been traditionally Afro-Co … Afro-Colombian.

Gerry Regan:  Would love to travel there. BTW, Jim, we can't forget to mention Che Guevara. As controversial as he was, and remains, he was very proud of his Irish ancestry, and credited it in part for his focus on the downtrodden.

Jim Goulding:  Yes Che is a very interesting topic for study. I did a lot of reading on him a while ago.

Belinda Evangelista:  The Irish Trad group The Chieftains have done some recordings with Latino musicians. have you heard any of them?

Jim Goulding:  Belinda … yes, the Chieftains -- I have their Santiago CD here and do enjoy it a lot.

Belinda Evangelista:  I love the sound of the latino and Irish mix :-)


Jim Goulding:  I love the mix too . And wish that the Chieftans would do another CD,they have such talent for mixing. They did a tour in China a few years back and came up wiothj an intersting mix of music after that trip.

The Wild Geese:  Just about time to wind our chat down for this evening.

Jim Goulding:  It has been a pleasure for me to share with you even such a short time. Keep up the good work at the WG!

The Wild Geese:  Thanks so much for your time, Jim!

Mary Ellen Jacobs:  Very interesting … the cultural stamp of these blended identities … I now have visions of Celtic/Latin dancing, to The Chieftains, while snacking on a traditional Latin dish!

Jim Goulding:  Thank you one and all.

Gerry Regan:  Jim, send us some of your sunshine, would you. Better yet, bring it up with you!

Jim - that was a really fascinating chat. Sorry I missed it. I was in Caracas recently and pointing out all the Irish names on the wall commemorating notable soldiers from the fight for independence. There were quite a few!