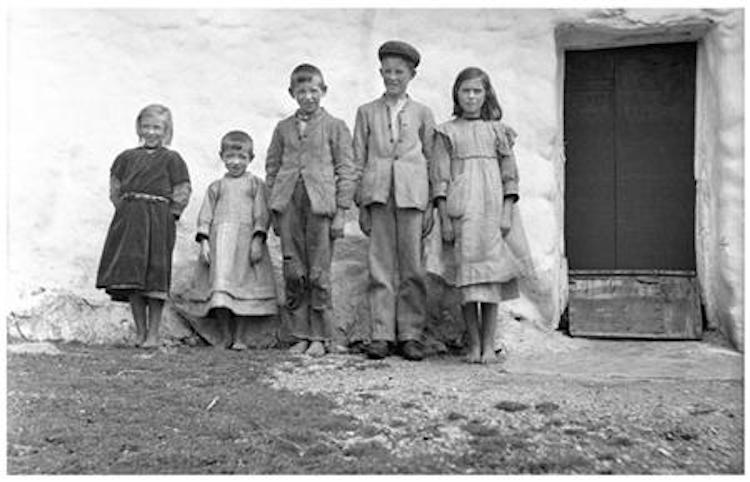 It is a source of great pain and frustration to genealogists that most 19th Irish census returns have been destroyed. The destruction is generally blamed on the fire at the Public Records Office in 1922 during the Irish Civil War. While the 1922 fire did consume a great deal of 19th century census returns, many of the 19th census returns were already destroyed prior to 1922. For this reason, those of us who are constantly researching Irish family history place a great deal of emphasis and hope in census substitutes.

The only complete Irish census returns that are currently available for research are those of 1901 and 1911. These are usually a switch-off for members of the Irish diaspora whose ancestors left Ireland in the early to mid 1800s. However, there is absolutely no need to switch-off if you fall into that category. Just because one of your Irish ancestors left Ireland in that period doesn’t mean close family members of that ancestor did not remain in Ireland.

One of the most useful Irish census substitutes is the wonderful land and property record known as Griffith’s Valuation which was published for the entire island of Ireland between 1847 and 1864, and at a different date for each location. Griffith’s includes occupiers or tenants, as well as owners of property, and therefore is a most useful aid in determining where your ancestor may have been born. It is possible to access Griffith’s Valuation on www.AskAboutIreland.com for free. Once you have identified your ancestral homeland from Griffith’s, it can then be useful to view the 1901 and 1911 census returns to check and see if family members still lived in the area in those years.

The 1901 and 1911 census returns are now available free-of-charge on the web-site of the National Archives of Ireland – www.Census.NationalArchives.ie. 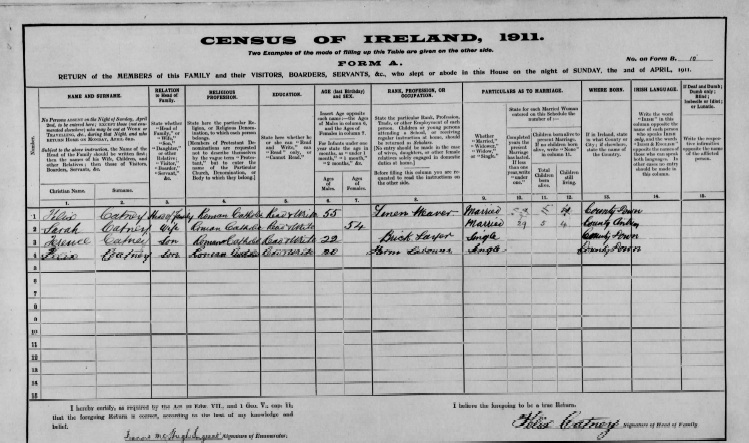 Both census returns provide the name and age of the Head of Family, the name and age of the spouse, and names and ages of their children. Any other individuals who are present in the household on the night of the census are also recorded in the family return. Additional information includes, religious profession, education, rank, profession or occupation, marital status, county of birth, and whether or not each individual speaks Irish (Gaelic) in addition to English.

The 1911 census return has three additional useful columns which asks the married woman how long the present marriage has lasted, how many children were born alive, and how many were still living.

The marriage question on the 1911 census return is particularly useful, as it leads one to search for the civil or church record of marriage for the couple. Civil records of marriage in that period provide names of fathers of bride and groom, and their respective occupations. In turn, this information may then encourage members of the Irish diaspora to continue the paper trail for the family documented in the 1911 census return and thus perhaps make the connection with their own immigrant ancestor.

The 1901 and 1911 census returns are arranged by county and are available for all 32 counties of the island of Ireland. They can be searched not just by surname, but also by occupation, religion, county, and country of origin etc. You can also search by place and view details of the neighbouring families, some of whom may even be related to your family. The full address of each house is recorded on the peripheral documents including the House and Building Returns. When searching by surname it is always useful to bear in mind that the search should extend to all possible variations of spelling. For example, if your ancestor was an O’Brien, he or she may have been recorded in the census returns as Bryan, Brien, or Brian. Similarly, the surname Heany may be recorded as Heaney, Haney, Heney, etc., Kiely may be recorded as Keily, Keely, Kealy, Keiley, etc.

It is also important to be aware that ages recorded on census returns can often be quite inaccurate.

One must be aware, of course, that these are remnants, and do not represent complete census returns for any county. Nonetheless, you might just be lucky to find a remnant of an early 19th century census return that includes the name of your ancestor who was born in Ireland. If so, your luck may even extend into the 20th century, with the discovery of the 1901 and 1911 Irish census returns detailing descendants of your ancestors’ siblings who remained in the ancestral area.

Great info that I will put to use, thanks Helen!