'Undaunted Courage': The Irish at Fredericksburg 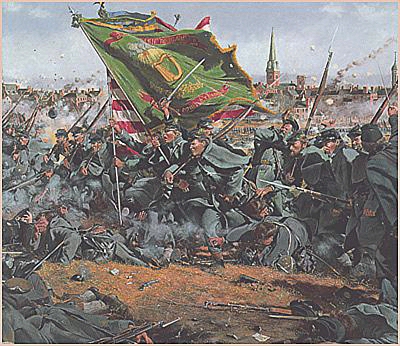 In 1862, the second year of America's Civil War, Meagher's Irish Brigade made two of the most gallant charges in American history, crashing bloodily against a Confederate strongpoint at Antietam's "Bloody Lane" and, 87 days later, attacking Confederates, many Irish, behind Fredericksburg's "Stone Wall." WGT is proud to present the story of the Irish at Fredericksburg in a three-part series.

"To charge the enemy or enter a battle when one knows that there is no hope of success, requires courage of a much higher order than when the soldier is sustained by the enthusiasm born of hope."

Winter was setting in as the first units of the Army of the Potomac gathered above the banks of the Rappahannock on November 15, 1862. The army, 130,000 strong, was in need of a rest, none more than the Irish Brigade, but the new commander of that army was under political pressure to act, and act he would.

Still, it was a battered, limping Irish Brigade, 1,200 men, that arrived in Fredericksburg with the rest of the Federal army. The brigade -- the 69th New York, the 88th New York, the 28th Massachusetts, 63rd New York, and the 116th Pennsylvania (which had replaced the 29th MA after Antietam) -- took more than 500 casualties assaulting the "Sunken Road" at Antietam in September, and heavy losses during McClellan's retreat on the Virginia peninsula in the spring. General Thomas Francis Meagher's condition mirrored his Brigade's, as he was still limping from an unhealed knee injury sustained at Antietam.

In terms of strategy, tactics, and generalship, the resulting battle of Fredericksburg, fought on December 13, was probably the most poorly conceived major engagement fought during the American Civil War. Confederate General Robert E. Lee took up a strong defensive position on the south side of the Rappahannock River with his Army of Northern Virginia and dared the new commander of the Army of the Potomac, Ambrose Burnside, to come and try to take it.

The over-eager Burnside, to his everlasting regret, took Lee up on that dare and battered his army's head on those defenses until it was bloodied and exhausted by the sheer futility of the task he asked it to perform.

Unlike so many other more fluid early battles of the war, where the armies marched and maneuvered over large areas, Fredericksburg, especially the famous portion of it fought on the slope of Marye's Heights, was a mainly linear affair for the Federals, straight up, and then straight back, while it was a nearly static one for the Confederates. It is likely that not one field officer in ten of those observing and participating in the forming up of the troops for this battle on either side had any doubts about its final outcome.

Fredericksburg was the most one-sided major defeat suffered by either side in the Eastern Theater during the War. The Federal army sustained an estimated 13,000 casualties, nearly three times the Confederate total of 5,000. But within these unequal casualty figures lies the reason this battle, in spite of its foregone outcome and uninspired tactics, continues to fascinate those who study Civil War history.

This epic battle, coming less than three months after Antietam, profoundly established the courage of the common soldier in blue. When the battle's smoke lifted, all could see that what stood between the Federal army and victory was its commanders, and not the pluck of the men in the ranks. And though many units in the Federal ranks demonstrated that fortitude on December 13, none surpassed the performance of Meagher's Irish Brigade.

Millions of words have been written about Burnside's strategy, or lack thereof, at Fredericksburg since that battle. In sum, Burnside ordered the right wing of his army to frontally assault the strong Confederate position on Marye's Heights, on the outskirts of the shell-ravaged town.

The Irish Brigade was part of the 1st Division of the 2nd Corps, a division commanded by General Winfield Scott Hancock, one of the most charismatic officers the Union army ever produced. His prowess merely compounded the tragedy of Fredericksburg, for there was little for even the most able of Federal officers to do there but point their troops toward the top of Marye's Heights and watch as their formations were mangled one by one.

French's Division (3rd Div. 2nd Corps) was the first to march out from the confines of Fredericksburg to take up the assault around noon. The division's lines emerged from the streets of the town and approached the Confederate forces, who confidently awaited its arrival. The Southern soldiers were arrayed four deep in some places in Telegraph Road, protected by an adjoining stone wall below Marye's Heights. General Thomas Cobb of Georgia, commanding there, remarked, "If they wait for me to fall back, they will wait a long time."

French's lines began going up the slopes in good order, then disintegrated in the face of the withering artillery fire from the Confederate gun positions on the top of the heights and the rapid musket fire from those in the sunken, protected road. The rear men of the four-deep ranks loaded and passed forward muskets, allowing each man on the wall to keep up a near continuous fire.

"Irish Brigade, forward at the double-quick ..."

Below, in the town, it was obvious to those awaiting their turn to join the assault just how difficult, if not impossible, it was going to be to dislodge Cobb's men from their position.

The green regimental flags of the Irish Brigade's three New York regiments had been sent home, too tattered and torn from battle to be used further. With their replacements due to arrive December 14, only the 28th Massachusetts carried a green flag that day.

Meagher knew that a large part of the fighting spirit of his Brigade was based on upholding the pride of their nationality. To compensate for the lack of green in their flags, sprigs of boxwood were handed out for the men to place in their caps. In victory or death, the Irish would proclaim their descent from a long-line of legendary and exiled soldiers.

Shells rained down as the Brigade marched out, men falling in the ranks as they emerged from the town. As the brigade front was formed, with the lone green flag of the 28th Massachusetts flying in its center, the smoke cleared and all could see that Zook's Brigade, like French's division before them, had been shattered against the stone wall lining Telegraph Road.

What a desperate enterprise this was, as near to suicide as any attack could be; there could be little doubt of that in the minds of even the privates in the ranks then.

Meagher limped through the mud on foot, having left his horse on the other side of the canal that lay just outside of town. Giving orders for all field officers to advance on foot, he returned to town for his horse and took a position further back.

The Brigade faced up the slope. As it did, shot and shell rained down from the Confederate artillery, and behind the wall Cobb's Georgians, many of them Irish as well, confidently awaited their next victims.

The wait under fire must have seemed interminable, and then the order rang out "Irish Brigade, forward at the double-quick, guide center, MARCH!" The smallest of 15 brigades to make the attempt that day, Meagher's Irish Brigade, now stepped off as one man, with the 69th New York, already on its way to immortality, holding the right.