My grandmother Susan C. Regan was born Susan Catherine Condon, the granddaughter of Irish immigrants. She was very excitable, what in another time and place might have been called a 'worry wart.'

But her bouts of unease seemed to this child's eye to pass quickly, perhaps because she WAS so vocal in expressing her anxiety. Still, she was easily -- and often -- kidded by my Dad -- her son Jerry, who quoted her, even at times teased her, in uttering "oooh! ooh! ooh! oooh!" whenever she'd experience a comment or situation that upset her.

Most famously, my Dad went to the corner bar for a 'growler' of beer, at the request of his Dad, Grandma's husband, Ray. The date was Dec. 7, 1941. The joint was abuzz, and the fellow working the stick said "The Japs have bombed Pearl Harbor." My Dad brought the beer, and the news, back to their Richmond Hill home. Ray intercepted my Dad. "Whatever you do, don't tell your mother." Grandpa's first instinct, God rest his soul, was to avoid upsetting Grandma, whose other son, Raymond, was already in the Army. It clearly proved a tough secret to keep. 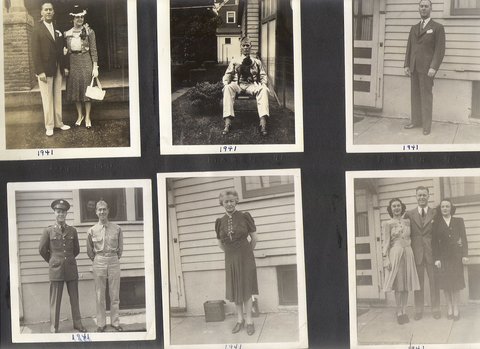 My sister, Laura, and I called her 'Grandma Sue,' while my cousins, the eight children of Raymond, referred to Grandma as 'Grandma Regan.' Interesting, this divergence in language in the extended Regan family! My Dad was in fact a bit more casual in his lifestyle, more easy-going, than his brother, and this might go some way to explain the difference.

Right, a shot taken from a page in one of my grandparents' photo albums, featuring, clockwise, left to right, Grandpa Ray and Grandma Sue; my Dad and 'Trixie'; Grandpa Ray; Dad and his brother, Raymond; Aunt Catherine Regan; my Mom, Dad and Raymond's wife, Marion.

In some sense, Grandma Sue might be said to hold 'the Rosetta Stone' of the Regan and Condon family histories. I had the perspicacity to record an hour-long interview with her in July 1977, conducted with a casette recorder, as I sipped a Cott soda in an ice-filled tumbler, in her living room at 144 Tanners Pond Road. The tidy but small home, still immaculate though long in other hands, had two-bedrooms, and was situated in the then-increasingly Catholic and Irish-American enclave of Garden City, N.Y. Grandma Sue and Grandpa Ray -- more formally Raymond V. Regan -- purchased it in the years after World War 2, when family-oriented New Yorkers of means and ambition were flocking to the fast-growing suburbs.

Grandpa died on August 4, 1966, age 69, of a massive coronary, while sitting at the manager's desk waiting to hear  on his application for dining privileges within the Garden City Country Club. Grandma was waiting for him, impatiently as my Dad oft told the story, as she sat in their Buick Skylark in the country club's parking lot, when she saw an ambulance pull noisily into the parking lot. This is how she got the terrible news. It's an account I'll never forget, one of those watershed events that come to delineate a family's history.

Still, Grandma proved resilient in the face of that loss, as so many widows seemingly did in that generation. As well, Grandpa was a superb provider and husbanded the family's modest wealth. He managed to work through The Depression to the envy of many of his peers, as a sales rep for Thonet, a well-established, cutting-edge German furniture maker.

Inevitably, gradually, Grandma's world began to shrink, as she gave that Skylark to one of her granddaughters and then became hobbled by the infirmities of increasing years. She fractured a bone, I think her hip, and was nursed to semi-independence by my mom, who temporarily moved her into our family's home in nearby New Hyde Park. Grandma's children and 10 grandchildren were attentive, though, and she was rarely alone on a given day. Grandma was, in my experience as a child and young adult, well-adjusted and good natured, something belied by my Dad's oft- but good-natured teasing. And to me then, the last of her generation that I could readily access, she proved a great trove of information, some of which, blessedly, I did record.

My grandmother died on Thursday, July 26, 1979, a week shy of 13 years after Grandpa Ray passed. She was found by a black woman, an aide from the Caribbean and a person of great warmth and caring, whose name I could remember until fairly recently. I recall there was some anxiety in the family about hiring a black woman, buttressed by ignorance and the then-common Caucasian stereotype equating African Americans with thievery. But that's another, longer story. The aide found Grandma on the bedroom floor, between twin beds, in the gap separating her bed from what had been Grandpa's. I always found the separate beds interesting too. I believe Grandma was dead or nearly so by the time her aide found her.

Fast forward to the months following my Dad's death in June 2007. Going through his things, I found a yellowing envelope, addressed simply 'Jerry.' Inside the envelope was a card that stated rather blandly, "On Father's Day, Son, With Special Love,' festooned with what looks like two masculine, impressionistic versions of two hawks. In an unsteady hand, Grandma wrote "For My Dear Son, Jerry." The inside of the card reads "It's Father's Day, Son -- Enjoy every minute And may there be nothing But happiness in it." She signed it, "Love Mother," and dated it 1979.

I find tears welling as I write, as I consider the card's date, June 17. For in less than five weeks she'd be gone. I imagine Grandma handing him that card in her living room, and perhaps an identical one for her son Ray, always wanting to be fair-handed, probably over an ice-filled glass of Cott soda or maybe a Molson beer. This is, I'm certain, the last greeting card she ever wrote. For me, discovering and holding that card has great moment and poignancy. -- Ger Ger, such a loving and vivid story - family - it really is everything.  Beautiful that you thought to record your grandma's voice and will always have her in that way.  I hope your Father's Day is a blessed one.

Comment by Kevin Gleeson on June 15, 2014 at 6:43am
Beautiful people. Terrific history. Touching images. Magical voice. Thanks for sharing.

Just beautiful, you're a natural storyteller.

Ger, it was so good to hear your voice, and that of your Grandmother's too. Thank you for sharing such a personal story, and those wonderful photos. This should encourage all of us to take notes, save cards, and if possible, record interesting narratives from close family members.