'To the Shores of Tripoli' 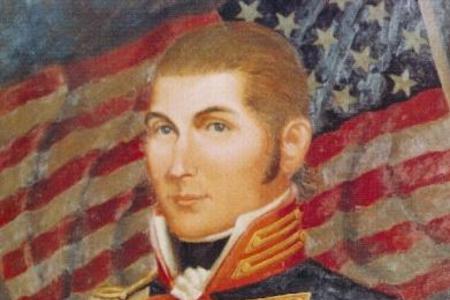 United States Marines have traveled several hundred miles overland, freed American prisoners of war, helped capture a Muslim city, and are now planning a regime change. That sounds like a possible present-day headline, but in this case the date was April 27, 1805, and the exploit was one of the most famous in the long and storied history of the United States Marine Corps. The city was Derna, on "the shores of Tripoli," and the Marine hero of the day was Lt. Presley Neville O'Bannon (right), of Virginia. WGT Managing Editor Joseph E. Gannon tells the story.

The Barbary Coast states of Morocco, Algiers, Tunis and Tripoli (today known as Libya) were once run by high-seas pirates. Though no one had yet coined the phrase, they were certainly the "Axis of Evil" of their day. For many centuries the ships of these four north African countries had been the scourge of shipping in that vital body of water. Often seizing vessels and holding their crews for ransom, or even selling them into slavery, these countries were so intimidating that most European nations paid yearly "tributes" to them to obtain the right of passage of their shipping.

Before their independence from Great Britain, American ships had not fretted, coming under the protection of the powerful British navy. The sultans and emirs of the Barbary Coast were ready to challenge most navies, but the British navy was an exception. The end of that British protection was the signal for the pirates to begin exploiting the shipping of the new, relatively weak United States. This they did, until finally, in 1799, the U.S. government gave in and agreed to pay each of the Barbary Coast countries $18,000 a year for the privilege of sailing in "their" sea.

This agreement broke down in 1801, however, as the Pasha of Tripoli, Yusat Karamanli, demanded more money, a demand the U.S. government refused. The Pasha declared war, and an American fleet was sent to the Mediterranean to deal with him. "Millions for defense, but not one cent for tribute" was the battle cry. This slogan conveniently overlooked the fact that we were still paying the tribute to the other Barbary Coast countries. In October 1803, a ship of the U.S. fleet, the frigate USS Philadelphia, ran aground and was captured. The crew ended up in the Pasha's dungeon.

Naval agent William Eaton proposed that the United States ally itself with the Pasha's older brother, Hamet, and send a force overland from Alexandria, Egypt, to attack Derna, in Tripoli. Hamet commanded a force of about 500 men. Most of them were Egyptian Mameluke tribesmen, along with some Turks, and about 40 Greeks. If successful, they could free the prisoners and also perform a "regime change" in Tripoli, deposing the present Pasha and replacing him with Hamet.

Presley O'Bannon, a 29-year-old Irish-American from Marshall, in Fauquier County, Virginia, was a Marine lieutenant serving on the USS Argus. The young officer was given command of one Navy midshipman and seven Marines and assigned the daunting task of accompanying Eaton and Hamet and their motley force on the perilous five-hundred-plus mile trek from Alexandria to Derna.

On March 8, 1805, Eaton, O'Bannon, and their small group of fellow Americans, "set sail" with Hamet's men on the ocean of desert leading to Derna. With 100 camels and some mules slogging through the red-hot sand, it took the small army 45 days to complete the harrowing journey. One of the delays was the refusal of the camel drivers to proceed on several occasions. O'Bannon was said to be instrumental in persuading them to move again.

At long last, on April 25, they arrived at Derna. Surely by then, many in this small army must have been happy at the prospect of battle, as opposed to dying a miserable death in the desert. A message was sent to the governor of Derna to surrender. His defiant reply was, "My head or yours." Shortly after this, the attacking force was bolstered by the arrival of the USS Argus, USS Hornet, and USS Nautilus in the harbor.

It was decided that Hamet and his Mamelukes would attack the governor's castle, while O'Bannon, with his Americans, along with the Greeks and Turks, would lead an assault on the harbor fort. The naval guns would assist by bombarding the objectives. 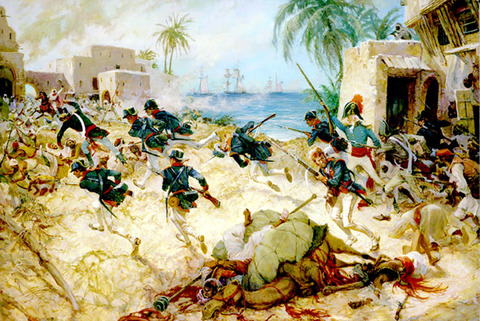 As the attack began, the firing from the governor's castle proved too much for Hamet's force, and they held back. With enemy reinforcements known to be on the way, the attackers were in dire need of a quick victory. Eaton ordered O'Bannon to lead his men in a frontal assault on the harbor fort. Two hours of desperate fighting ensued, but finally O'Bannon and his men drove the Tripolitans from the fort and captured the guns there before they could be spiked. This would prove to be important.

O'Bannon had carried a U.S. flag with him, and now, for the first time in history, the Stars and Stripes was raised over foreign soil. Seeing this, the defenders in the governor's castle took flight and Hamet's men took possession of it and the town. The victory was not complete, however, for now the feared enemy-reinforcements arrived, determined to recover what had been lost.

A number of vigorous assaults followed. All were repulsed, with O'Bannon's men able to use the captured guns of the fort to good effect. Finally the Tripolitans gave up, and the battle of Derna was over. Presley O'Bannon had led the first victory of American land forces on foreign soil. It had not come without a cost. O'Bannon lost 13 killed in the attack, including two of his Marines: Pvt. John Whitten and Pvt. Edward Steweard. The people of the town proclaimed Hamet the new ruler of Tripoli, but the victory was fleeting.

Unfortunately for O'Bannon and especially Eaton, who had been the mastermind behind the plan to eliminate the Pasha, the politicians did not manage to hold on to gains won by the blood of their soldiers. Jefferson's government negotiated a treaty that did include the release of all the American sailors imprisoned there, but it still required the United States to pay to ensure no further attacks on its shipping. And worst of all, it left the Pasha in power. Eaton was outraged, and Hamet was forced into exile in Sicily.

Thus, the fruits of the victory were tainted, but the skill and courage displayed by O'Bannon and his men was unquestionable. As well, they had demonstrated that the new American nation would stand up for its rights, with its armed forces, if need be.

Presley O'Bannon served in the Marine Corps until March 6, 1807. He later served in the Kentucky State Legislature. He died on September 12, 1850, at the age of 74. A monument was erected over his grave in the state cemetery in Frankfort, Kentucky.

O'Bannon's exploits would be commemorated by the Marine Corps and the Navy, as well. The Marine Corps hymn would later include the words "to the shores of Tripoli" in honor of his victory. In addition, the dress sword carried by every Marine officer to this day, with ivory hilt and gold eagle head, is called the "Mameluke Sword." It is a copy of the sword carried by Hamet at Derna, which he later gave to O'Bannon in gratitude for his service.

Three Navy destroyers have been named USS O'Bannon--DD-177, DD-450, and DD-987. The latter is still on duty. The second, DD-450, was one of the most distinguished destroyers in Navy history. It served in World War 2, where it won 17 battle stars, the most of any destroyer, and served further in Korea and Vietnam, retiring in 1970.