This Week in the History of the Irish: September 30 - October 6

CÉADAOIN -- On Oct. 3, 1691, the Treaty of Limerick was signed, ending the Williamite War in Ireland. It has been said that Irish history is something the Irish should never remember and the English should never forget, but the recollection of this treaty is another example of the opposite being true. That the English wish to forget this event is not surprising, it is one of the most disgraceful moments in their long and dishonorable history of persecution of the Irish nation. Patrick Sarsfield and his army had frustrated William of Orange's plan for a short, decisive campaign in Ireland; William was desperate to end those hostilities and send his forces in Ireland to reinforce his army on the continent.

DEARDAOIN -- On October 4, 1693, units of the Irish Brigade of France fought in Italy at the battle of Marsaglia. 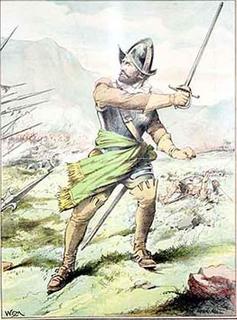 SATHAIRN -- On October 6, 1649 Owen Roe O'Neill (left), nephew of Hugh O'Neill and an officer in the Spanish army, died at Cloughoughter Castle on an island in Lough Oughter in County Cavan. Owen is thought to have been born in 1585, probably near Loughgall in County Armagh. He left Ireland as a young man, going to Catholic Spain. Owen would serve in the Spanish army for 40 years. For many years he unsuccessfully urged the Spanish to invade Ireland. Finally, after the Irish rebelled against English rule in 1641, he was allowed to go to Ireland with 300 veterans. On July 8, 1642 Owen arrived at Lough Swilly and was immediately given command of the Irish army then in revolt. O'Neill had been serving in the Spanish army since 1610 and had made a name for himself during his defense of Arras against the French in 1640. Like the Jacobites later in the century, O'Neill would claim to be fighting for the King and legitimate ruler of England. O'Neill defeated the Scottish Parliamentarians at the battle of Benburb on June 5, 1646, but it would be the only major victory for the Irish forces during the revolt. Cromwell and his battle-hardened veterans landed in Dublin in August 1649. He quickly set into motion his plan for the reconquest of the island. O'Neill began marching south to attempt a junction with Ormond's Royalist army in November when he suddenly died. Some say he was poisoned but no evidence supports that.