DOMHNAIGH -- On September 1, 1864, Irish patriot Roger Casement was born at Sandycove, County Dublin. Casement joined the British colonial service and was knighted in 1911 for his work on behalf of African and South American native workers who were being exploited by whites. Leaving the colonial service in 1912, he became involved with Irish nationalism, joining the Irish Volunteers. In 1916, Sir Roger traveled to Germany and arranged German assistance for the Easter Rising. He traveled back to Ireland by submarine, convinced by then that the Rising could not succeed but that he must join his comrades. He was captured at McKenna's Fort soon after landing on the southwest coast. Casement was later tried in England. To lessen the protests over his expected death-sentence the British circulated small parts of his so-called Black Diaries which purported to reveal his alleged homosexual activity while in colonial service. Recent evidence points to a possibility that these diaries were forged by British intelligence to lessen worldwide condemnation of Casement's execution. Sir Roger Casement was hanged at Pentonville Prison on August 3, 1916. In 1965 Casement's body was returned to Ireland, where he was given a funeral on March 1that rivaled that of O'Donovan Rossa. Eamon de Valera, 82 years old and feeling poorly, insisted on attending and gave the graveside oration at Glasnevin Cemetery, Dublin. Casement had returned to Ireland in 1916 to share his comrades' fate -- 49 years later he was finally able to rejoin them one last time. MÁIRT -- On September 3, 1842, John Devoy, (in a prison photo, left) one of the most devoted revolutionaries the world has ever seen, was born in Kill, County Kildare. John showed his commitment to Irish freedom early, refusing to sing 'God Save the Queen' in school at the tender age of 10. He was a faithful Fenian at 18 and later led Fenian recruitment among Irish soldiers of the British army. In 1866 he was arrested and sentenced to 15 years but was released during the '71 amnesty, on condition he leave Ireland. Moving to America he worked as a journalist and joined Clan na Gael which had become the leading Irish-American ally of the Irish republican movement. Devoy was soon its leading member. His greatest early success was the freeing of six Fenians from a penal colony in Australia on the whaling ship Catalpa and he accomplished much through his co-operation with the land reform movement in Ireland. He also became involved with numerous large and small disputes within the organization and saw it through a low period in the late 19th century. Through Devoy, Clan na Gael helped finance many Irish causes, culminating with the group's support of the Easter Rising and the War of Independence. He visited the Free State in 1924 and was given a well-deserved hero's welcome by the government and people of Ireland. Few men have sustained their revolutionary zeal into their 80s as did Devoy. John Devoy died in Atlantic City , N.J., on September 29, 1928, having sacrificed his entire life for Ireland.

CÉADAOIN -- September 4, 1607, (Julian calendar) was a crucial day in Irish history. On that day Hugh O'Neill, Ruari O'Donnell and many other chiefs of their families departed from Lough Swilly for the continent. It is known in Irish history as the 'Flight of the Earls." O'Neill and his O'Donnell allies, led by "Red" Hugh, had fought Queen Elizabeth long and hard during the 'Nine Years War.' They had come very close to winning that war. But since their defeat at Kinsale in 1601, the chance of success of their cause had slowly faded. "Red" Hugh had died in Spain in 1602, probably poisoned by a British spy, and O'Neill had submitted to the crown soon afterward. Elizabeth died at the same time but her successor, James I, wanted to plant Ulster more heavily with loyal Scotch and English settlers and O'Neill was sure to object -- he had to go. A plot was devised to arrest O'Neill and Ruari O'Donnell, 'Red' Hugh's brother. O'Neill saw through the British plot, but he had few options -- lacking the resources to fight the English again, flight was the only option. And so they gathered at Lough Swilly and sailed to France, most never to see Ireland again. James I would soon plant the O'Neill and O'Donnell lands with Protestant settlers, helping to sow the seeds of the present 'Troubles.' O'Donnell died in Rome in 1608; O'Neill died there also in 1616. 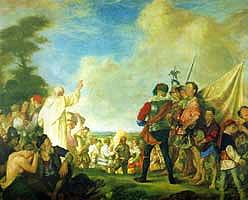 1, 1701 - Irish Brigade of France fights at the Battle of Chiari in northern Italy during the War of the Spanish Succession.
1, 1862 - Irish American Union General Philip Kearny is killed at the battle of Chantilly, VA.
1, 1862 - Irish 6th LA fights at the battle of Chantilly.
2, 1939 - Ireland declares its intention to remain neutral in coming war.
2, 1942 - IRA Volunteer Tom Williams is hanged at Belfast's Crumlin Road Jail.
3, 1741 - Irish-born Gen. Peter Lacy commands a Russian army which routs the Swedes at Wilmanstrand.
3 - Oct. 28, 1779 - Dillion's Regiment of the Irish Brigade of France takes part in the siege of Savannah.
4, 1607 (Julian calendar) - Flight of the Earls - O'Neill and other Irish nobles sail for the continent.
4, 1844 - Conspiracy judgment against Daniel O'Connell is reversed by House of Lords.
5, 1798 - Gen. Humbert's combined force of French soldiers and Irish rebels defeat an English force under Col Vereker at Collooney, south of Sligo town.
7, 1695 - Penal Laws passed severely restricting the rights of Catholics in Ireland.
7, 1892 - "Gentleman" Jim Corbett beats John L. Sullivan for the Heavyweight boxing championship in New Orleans, LA.