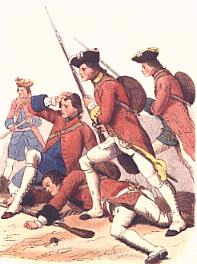 DOMHNAIGH -- On October 4, 1693, units of the Irish Brigade of France fought in Italy at the battle of Marsaglia. Prince Eugene of Savoy commanded the allies of William of Orange, who opposed them. During the battle Irish dragoons were reported to have … 'overthrown squadrons, sword in hand … ,' but elsewhere on the battlefield, Prince Eugene overran a French line and advanced to the second line, held by Irish regiments.

(Left: From an engraving by Jean Sorieul: Uniforms of the Irish Brigade of France. These red coats were worn throughout the Brigade's history, signifying their support for the Stuart claim to the English crown.) 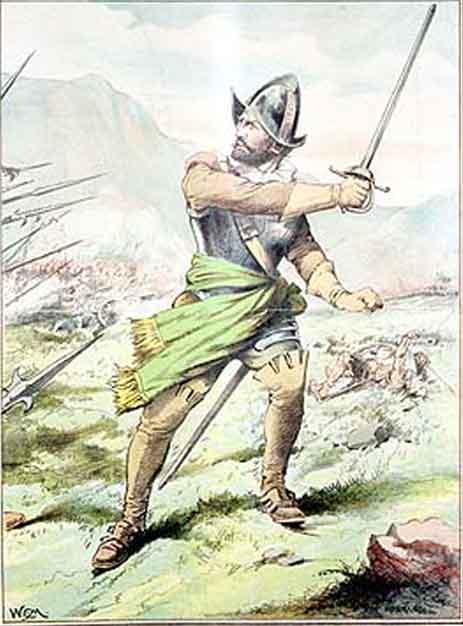 MÁIRT -- On October 6, 1649, Owen Roe O'Neill (left), nephew of Hugh O'Neill and an officer in the Spanish army, died at Cloughoughter Castle on an island in Lough Oughter in County Cavan. Owen is thought to have been born in 1585, probably near Loughgall in County Armagh. He left Ireland as a young man, going to Catholic Spain. Owen would serve in the Spanish army for 40 years. For many years he unsuccessfully urged the Spanish to invade Ireland. Finally, after the Irish rebelled against English rule in 1641, he was allowed to go to Ireland with 300 veterans. On July 8, 1642, Owen arrived at Lough Swilly and was immediately given command of the Irish army then in revolt. O'Neill had been serving in the Spanish army since 1610 and had made a name for himself during his defense of Arras against the French in 1640. Like the Jacobites later in the century, O'Neill would claim to be fighting for the King and legitimate ruler of England. O'Neill defeated the Scottish Parliamentarians at the battle of Benburb on June 5, 1646, but it would be the only major victory for the Irish forces during the revolt. Cromwell and his battle-hardened veterans landed in Dublin in August 1649. He quickly set into motion his plan for the reconquest of the island. O'Neill began marching south to attempt a junction with Ormond's Royalist army in November when he suddenly died. Some say he was poisoned but no evidence supports that. DEARDAOIN -- On October 8, 1862, Irish-born Confederate General Patrick Cleburne commanded a brigade at the battle of Perryville, Kentucky. Cleburne's brigade was part of the army of General Braxton Bragg. Encouraged by Jefferson Davis, Bragg had invaded Kentucky in August. On the 30th, at the battle of Richmond, Cleburne had received a very painful injury when a ball passed through his open mouth and out his left cheek, taking several teeth with it. But less than a month later, the intrepid warrior was back with his command, in time for the crucial battle at Perryville. 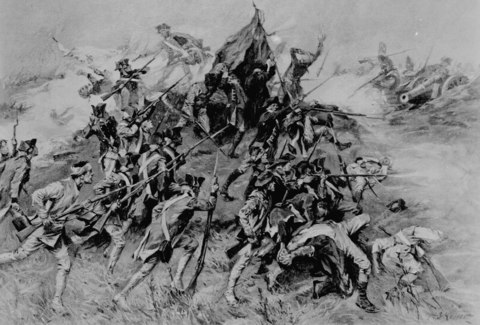 AOINE -- On Oct. 9, 1779, members of Dillon's and Walsh's Regiments of the Irish Brigade of France took part in the Franco-American assault on Savannah, Georgia, during the final stages of the siege there during the American Revolution. Dillon's regiment was sent to the right of the main assault, but their guides proved to be unreliable and the column went down the wrong path into a swamp.

4, 1576 - Granuaile (Grace O’Malley) visits Queen Elizabeth.
4, 1693 - Irish Brigade of France fights in the battle of Marsaglia.
5, 1968 - The first clash between civil rights marchers and RUC in Derry.
6, 1649 - Owen Roe O'Neill, nephew of Hugh O'Neill and an officer in the Spanish army, dies at Cloughoughter Castle on an island in Lough Oughter in County Cavan.
6, 1798 - Grattan removed from Irish Privy Council, falsely charged with being a sworn member of United Irishmen.
6, 1891 - Charles Stewart Parnell dies in Brighton.
7, 1594 - Battle of the Biscuits.
7, 1843 - O'Connell's 'monster' Repeal meeting prohibited and canceled.
8, 1862 - Irish-born Confederate Gen. Patrick Cleburne commands a brigade at the Battle of Perryville, Kentucky.
8, 1862 - The Irish 35th Indiana fights at the Battle of Perryville, KY.
9, 1779 - Dillon’s and Walsh’s Regiments of the Irish Brigade of France takes part in a failed assault on Savannah.
9, 1779 - South Carolina hero, Sergeant William Jasper, is killed during the assault on Savannah.
9, 1814 - Irish-born US Navy Capt. Johnston Blakeley and his warship “Wasp” are lost at sea.
9, 1849 - First tenant protection society established at Callan, Co. Kilkenny.
10, 1729 - Irish native George Baron Browne, general in the Austrian army, dies Austria.