This Week in the History of the Irish: October 23 - October 29

DOMHNAIGH -- On October 23, 1641, implementing a plan by Rory O'More and led by Phelim O'Neill (right), the Irish rose up against the English. Their plan had called for the seizing of Dublin Castle on the 23rd along with a general uprising in the countryside, but the plot to capture the Castle was foiled by an informer. In Ulster, however, the plot did not fail: By the end of the day, much of the province was controlled by the rebels. Within days the province had been taken, with many of the poor Catholic peasantry taking an active part in the uprising. With resentment and hatred of those who had stolen the bulk of Ulster from the native Irish running high, many atrocities would be committed by these Irish peasants in the following days and weeks. How many Protestants colonists were actually killed during this period has never been firmly established. In England, each retelling of the events increased the number until it was said that over 150,000 had been killed in Ulster. This figure was well over the actual total number of Protestants living in Ulster at the time. A meticulous study of the events was once done which set the figure, even when including local hearsay and rumor, at about 1,250, less than 1% of the exaggerated figure. The larger, spurious figures would be used to justify later massacres by Cromwell and others; in reality, in one day at Drogheda in 1649 Cromwell would slaughter twice as many as had been killed in Ulster in all of 1641. More incredible than England's ready acceptance of those tremendously inflated figures then is that they are also still cited by some today in an attempt to exonerate Cromwell. 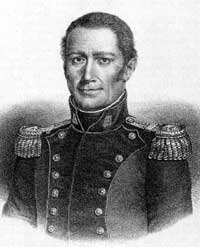 CÉADAOIN -- On Oct. 26, 1771, John (Juan) MacKenna, who would rise to fame in South America, was born in Clogher, County Tyrone. MacKenna was related to Gen. Alexander O'Reilly, of the Spanish army, and O'Reilly helped MacKenna get established in Spain. In 1787, MacKenna was appointed a cadet in the Irish Brigade of the Spanish army and fought with them in Ceuta in northern Africa. After returning to Spain, he met the future liberator of Argentina, José de San Martín. In 1796 he traveled to Chile and served as a military engineer for Ambrose O'Higgins, and MacKenna eventually was appointed governor of Osorno, Chile. He joined the revolutionary party of Carrera in 1810, commanding his artillery, but he had a falling out with Juan Jose Carrera, a rift which would one day cost him his life. MacKenna would eventually ally himself with Carrera's rival, Bernardo O'Higgins, son of John's old friend Ambrose. When Carrera came to power in 1814, he banished MacKenna from Chile. While he was living in exile in Argentina he became embroiled in a dispute with Luis Carrera, brother of the Chilean revolutionary, and was killed in a duel with him in Buenos Aires on Nov. 21, 1814.

In noe wayes intended against our Soveraine Lord the King, nor the hurt of any of his subjects, eyther of the Inglish or Schotish nation, but only for the defense and liberty of our selves and the Irish natives of this kingdome.'
-- From a proclamation issued by Phelim O'Neill after his capture of much of Ulster, October 24, 1641