DOMHNAIGH -- On June 9, 1798, Col. Chetwynd-Stapylton and a detachment of the York Fencibles rode into the town of Saintfield, County Down, and straight into a force of United Irishmen who had earlier occupied the town. The United Irishmen attacked the Fencibles, killing several of them and driving them off. Among the dead was the colonel's cousin, Capt. William Chetwynd.

DOMHNAIGH -- On June 9, 1862, as part of "Stonewall" Jackson's "Valley Campaign," the Irish 6th Louisiana fought in the battle of Port Republic, Virginia. Port Republic and nearby Cross Keys were attacked June 8, but the 6th Louisiana was not engaged. The attacks on Cross Keys on the 8th, by a large force under General John Fremont, were called "feeble in the extreme" by Confederate Brig. Gen. Richard Taylor, commander of the Louisiana Brigade, which included the 6th Louisiana. The attack on the Confederates at Port Republic on the 8th had been made by 150 troopers riding in front of Brigadier General James Shield's larger Federal force. The attack on Port Republic on the 9th, however, would be neither small, nor feeble. General Shields, a native of County Tyrone, would prove a more dangerous foe than Fremont the day before, especially for the Louisiana Brigade. As the brigade arrived on the field, the Confederates were outnumbered and Shields' men were advancing. Jackson sent the brigade to attack a strong Union artillery position, which dominated the battlefield from the high ground. While the brigade was advancing on the artillery position, the Union advance in the lowlands swept through the outnumbered Confederates there. The prospects for a Confederate victory appeared slim as Taylor ordered the brigade to advance uphill through the woods on the Federal guns. As the Confederates burst out of the woods on the surprised Federals, the 6th Louisiana was in the most exposed position on the Rebel left and received a destructive fire from the Federal cannon and from the 66th Ohio, which was posted near the guns. The fighting around the guns was soon hand to hand. The Confederates finally wrested the guns from the Federals, but were immediately counterattacked. The fighting again became hand to hand, before the Federal attack was beaten back. But the determined Union troops advanced again, and drove the Confederate off the guns and back into the woods. Taylor reformed his disorganized brigade around the 6th Louisiana's colors and attacked the guns again and retook them, only to be driven off them once again by a Federal counterattack. Reinforced now by parts of the 44th and 58th Virginia, the Confederates advanced on the guns a third time, finally taking them for good. The elation of the 6th was tempered by the regiment's losses. The regiment had suffered 23 men killed, 12 of whom listed Ireland as their place of birth, and 55 wounded. It was highest number of men killed that the 6th suffered in any single battle. 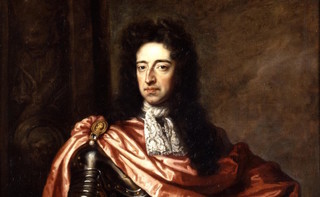 AOINE -- On June 14, 1690, William of Orange, King of Holland, and recently declared King of England, arrived in Belfast with his fleet. The Catholic King James II had been tolerated by the Protestant nobility for a time because all his possible heirs were Protestant. But when James' wife gave birth to a son all that changed. Unable to face the prospect of another Catholic on the throne, they invited William of Orange, who was married to James' daughter Mary, to assume the British throne. As James' and William's armies prepared to meet, William had a formidable force with him, over 40 pieces of artillery and more that 1,000 horses; his army would number over 36,000 when fully gathered. James' army would be inferior in men and firepower. The fate of the crown of Great Britain would now be decided on the fields of Ireland.