This Week in the History of the Irish: February 20 - February 26 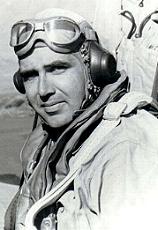 DOMHNAIGH -- On February 20, 1942, Lt. Edward "Butch" O'Hare became the first U.S. Navy ace of the war when he was credited with downing five Japanese bombers in a single day. O'Hare had an interesting family history. After his parents divorced when he was 13, his lawyer father moved to Chicago and took on Al Capone as a client. He later turned against Capone and gave evidence against him. This help led to his tax evasion conviction. In 1939, O'Hare's father, also Edward, was murdered, probably by members of Capone's gang.

MÁIRT -- On February 22, 1886, Conservative Party politician Lord Randolph Churchill, father of Winston Churchill, gave what many consider one of the single most destructive speeches in Irish history, inciting militant loyalists at Ulster Hall in Belfast. Churchill

He decided that if Prime Minister William Gladstone "went for Home Rule [for Ireland], the Orange Card would be the one to play. Please, God, may it turn out the ace of trumps and not the two." This quote would lead one to believe he had few real convictions regarding the issue. "Ulster will fight, and Ulster will be right," he proclaimed to a crowd before he even arrived at Ulster Hall on February 22. During his speech, he played on Protestant fears of Dublin's "Catholic" rule and encouraged Ulster Protestants to organize, which they did, beginning to form paramilitary drilling units. Churchill achieved a short-term political gain by his playing of the Orange Card; but his most lasting legacy is the unfounded fear of Irish Catholics that he helped to implant in the minds of Ulster Protestants, a tragedy for both traditions on the island. Those fears are still evident in the sectarian hatreds of today. DEARDAOIN -- On February 24, 1854, Daniel Florence O'Leary a general in Simon Bolivar's South American army, died in Bogota, Colombia. O'Leary was probably born about 1800 in Cork city, the son of a butter merchant. Little is known of his early life. In 1817, he traveled to London to enlist in a regiment being formed by Henry Wilson. Wilson was recruiting officers and NCOs to go to South America and form a Hussar regiment in service to Simon Bolívar, who would go on to liberate much of South America from Spanish rule.

O'Leary sailed for Venezuela with Wilson near the end of 1817, arriving in March 1818. O'Leary first met Bolívar away from the front shortly afterward and apparently Bolívar was impressed with the young Irish officer. In March 1819, O'Leary saw his first action and was promoted to captain. In July, after Bolívar's famous crossing through the Casanare Swamps and over the Andes, O'Leary received a saber wound in the battle of Pantano de Vargas but he quickly recovered and took part in the battle of Boyaca on August 9. Shortly after this, O'Leary became aide de camp to Bolivar. Two years later, after much more fighting, Venezuela was freed. During the next few years, as the fight continued to free the rest of South America from Spanish domination, O'Leary would perform many dangerous missions for "The Liberator," rising ever higher in his esteem. O'Leary continued to serve Bolívar well through the political and military intrigues that followed the freeing of South America from the Spanish. After the death of Bolívar in December 1830, the new Venezuelan government exiled O'Leary to Jamaica. There he wrote extensive memoirs that were later edited by O'Leary's son, Simon Bolívar O'Leary, and published in the 1870s and 80s. Simon was the eldest of six children O'Leary had with his South American wife. In 1833, O'Leary was able to return to Venezuela. He held a number of diplomatic posts for the Venezuelan government for the next 20 years, and on at least two occasions was able to visit his boyhood home of Cork. When O'Leary died in Bogota in 1854, he was buried there in Colombia's capital. The Venezuelans named a plaza after him in Caracas. In 1882, they obtained permission to take Daniel O'Leary's body from Bogota to Caracas, where it was laid to rest in the National Pantheon of Venezuela to lie forever in death next to the man had served so faithfully in life, Don Simon Bolívar. AOINE -- On February 25, 1891, Edward "Ned" Daly, one of the leaders of the Easter Rising, was born in a home on Frederick Street in Limerick city. Edward's family was staunchly republican. His father and uncle were Fenians. His uncle, John, served 12 years in English prisons. Edward's sister, Kathleen, married Thomas Clarke, another leader of the Easter Rising. Edward joined the Irish Volunteers in 1913 and became captain of one of their companies and then advanced to battalion command.

20, 1921 - 12 Irish Volunteers are killed when Crown forces surround a farmhouse in Clonmult, Co. Cork
20, 1942 - Lt. Edward "Butch" O'Hare becomes the first U.S. Navy ace of the war when he is credited with downing five Japanese bombers in a single day
21, 1945 - For his actions leading his company on Iwo Jima on this day, Marine Capt. Joseph Jeremiah McCarthy is awarded the Medal of Honor
22, 1797 -The last invasion of England: Small French force commanded by Irishman William Tate lands in Wales.
22, 1832 – The first burial in Glasnevin Cemetery, Dublin, which will one day be the final resting place of many Irish heroes such as Charles Stewart Parnell, Constance Markievicz Daniel O'Connell, and Michael Collins
22, 1886 - Lord Randolph Churchill gives a memorable speech inciting militant loyalists at Ulster Hall in Belfast.
23, 1919 - The Tipperary Brigade of the Irish Volunteers issues a proclamation ordering all British personnel to leave Tipperary or “forfeit their lives.”
23, 1965 - Roger Casement's body returned from England to be reinterred at Glasnevin in Dublin.
24, 1692 - The Treaty of Limerick is ratified by William of Orange.
24, 1854 - General Daniel Florence O'Leary, officer in Simon Bolivar's South American army, dies in Bogota, Colombia.
24, 1920 - The Mid-Clare Brigade Irish Volunteers ambush RIC at Crowe’s Bridge, Vice Commandant Martin Devitt is killed.
25, 1919 - Cork No. 3 Brigade Irish Volunteers attack RIC barracks in Timoleague and Mount Pleasant.
25, 1921 - Cork No. 1 Brigade Irish Volunteers ambush Auxiliaries at Coolnacahera, Co. Cork.