This Week in the History of the Irish: December 5 - December 11

LUAIN -- In the early morning hours of December 6, 1921, representatives of the Irish government appointed by President Eamon de Valera, and those negotiating for the Crown signed the Anglo-Irish Treaty, ending the Irish War of Independence against Great Britain.

(Above, right: Michael Collins signature (in Irish) on the Anglo-Irish Treaty. Immediately after he signed it, he commented to a member of the British negotiating team that he had just signed his own death warrant. He would die at the hands of his former comrades in the IRA within the coming year.)

It was then, and remains, one of the most debated moments in Irish history. The British negotiating team, led by Winston Churchill and Prime Minister Lloyd George, was composed of old masters at the game of politics. Arthur Griffith and Michael Collins led the Irish team; they were brave and intelligent, but had nowhere near the political acumen of the British side.De Valera, a shrewd, experienced politician, may have been the only man in all of Ireland who might have matched them, but he refused to join the negotiations. With less reluctance about forcing their political opponents to negotiate "with a gun to their heads" than they appear to have developed recently, the British gave the Irish an ultimatum on the evening of Dec. 5: Sign the treaty as is, or face military annihilation in three days. (See quote below.) The treaty Collins and Griffith had signed contained several clauses that de Valera and his supporters would reject. Chief among them was the treaty's partition of the country and its requirement that Irish officials must swear an oath of allegiance to the Crown. The cabinet split 4 to 3 in favor of the treaty, and in January, the full Dáil Eireann accepted the treaty 64-57. The stage was set for the brutal Irish Civil War and the seeds of the tragic political mistake known as Northern Ireland were sown. Ever since Irish historians have debated how events might have turned differently. Was Collins right to accept anything less than full Irish independence? Were the British bluffing? Did the world's -- especially America's -- revulsion at the atrocities of the Black and Tans make impossible the threat of Lloyd George's threatened siege of the Irish population? Would further resistance by the Irish have resulted in the dreamed-of 32-county republic, or might it have resulted in a continued 32-county colony? We will never know, and will always wonder.

MÁIRT -- On December 7, 1768, William Bulkely, an officer in the Irish Brigade of France, was born in Clonmel, County Tipperary. In 1785, the young Bulkely went to France. His uncle, Richard Butler, who had been a colonel in the Irish Brigade, used his influence to retain a spot for William in Walsh's regiment. William later married a well-to-do French widow. Like most of the Irish soldiers in France, Bulkely opposed the French Revolution and left the army when the republicans seized power. In 1793, he took part in the royalist insurrection, commanding the district of La Roche, near his wife's estate. He led an attack on the rebels at Les Sables, but the attack failed. Bulkely continued to fight for the royalist cause through 1793, and finally he and his wife were captured by the republicans and taken to Angers. While fighting the republicans, Bulkely's men had captured a number of prisoners and many of the royalists -- including his wife -- had urged him to shoot them, but Bulkely refused. Now a captive, Bulkely would not be so lucky. He was quickly tried by a military tribunal and condemned to death. On January 2, 1794, 25-year-old William Bulkely suffered the same fate as a number of other former officers of the brigade that shed much blood in the service of France: he was taken to the guillotine and bled for France one last time, another victim of the Revolution's bloody "Reign of Terror." 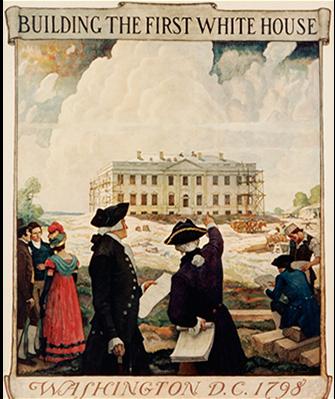 CÉADAOIN -- On December 8, 1831, James Hoban, the architect of the White House, died in Washington, D.C. Hoban, a native of County Kilkenny, was educated as an artist by Thomas Ivory in Dublin. He worked as one of the architects on a number of buildings in Ireland, including the Customs House, before emigrating to the United States in 1785. In 1792, Hoban won a competition for the design of the President's house in the new national capital. AOINE -- On December 10, 1710, the Irish regiments in the service of Spain fought in the battle of Villaviciosa during the War of Spanish Succession

5, 1920 The burned and mutilated bodies of Volunteers Pat and Henry Loughnane, murdered by the Auxiliaries, are found in a pond at Owenbristy near Ardrahan, Co. Galway.
5, 1921 – The Irish committee negotiating the Anglo-Irish treaty is told to accept the terms or face "immediate and terrible war" by Lloyd George.
6, 1820 - Spanish Gen. Diego O'Reilly defeated by Peruvian revolutionaries.
6, 1876 - Jack McCall was convicted for the murder of Wild Bill Hickok and sentenced to hang.
6, 1921 - Signing of Anglo-Irish Treaty.
7, 1688 - The Apprentice Boys of Derry close the gates against King James' troops.
7, 1972 - "Special position" of Catholic Church removed from Irish constitution.
8, 1831 - James Hoban, architect of the White House, dies in Washington D.C.
8, 1922 – Irish Republicans Liam Mellows, Rory O'Connor, Joseph McKelvey and Richard Barrett, are executed by the Free State forces.
9, 1710 - The Irish "Hibernia" regiment and other Irish units of Spain fights at the battle of Brihuega.
10, 1605 - John Lee founds the Irish College in Paris.
10, 1710 - Irish in Spanish service fight at the battle of Villaviciosa.
10, 1920 - The British authorize “official reprisals,” which had been going on unofficially for months already, against civilian property in Ireland.
11, 1809 - The Spanish garrison at Gerona, including the Irish Ultonia regiment, surrender to Napoleon's troops.
11, 1799 - Charles Edward Kilmaine, Gen. in the French army, dies in Paris.
11, 1920 - Black and Tans and Auxiliaries go on a rampage of burning and looting in Cork, following ambush.