This Week in the History of the Irish: December 22 - December 28 MÁIRT -- On December 24, 1601, Hugh O'Neill and his Spanish and Irish allies were defeated by the English at the Battle of Kinsale, one of the most important battles in Irish history. With the able assistance of his main ally, "Red" Hugh O'Donnell,

O'Neill was fighting to defend Gaelic Ireland against the forces of Elizabeth I of England. For several years they had held the English at bay from the strongholds in Ulster, beating them at Yellow Ford in 1598 and Moyry Pass in 1600. But if they were ever going to drive the English back across the Irish Sea, they were going to have to come out from the hills and passes and meet them in open battle. In 1601 that day of reckoning came, as O'Neill's Spanish allies arrived in Ireland. They arrived in Kinsale on September 21, 13 miles south of Cork, which is not where O'Neill would have hoped. He had sent a message asking them to land further north, so they might join forces and march against the English, but that message either never arrived or arrived too late. Now O'Neill and O'Donnell faced a long march to join with their allies, and the English were much closer to Kinsale than they. Before the Irish could get there, Mountjoy's army had laid siege to the Spaniards at Kinsale. To leave their northern strongholds held many dangers for the Irish chieftains, but leave they did, moving down through the whole length of Ireland to put the future of Gaelic Ireland to the test on the battlefield. On the morning of the 24th, O'Neill moved to attack Mountjoy's army. There was no coordination between O'Neill army and the Spanish in Kinsale, under Don Juan del Aguila. The Spaniards made no attempt to either attack in force or even create a diversion. O'Neill's army, especially his cavalry, which performed badly, was not ready to meet the English in this sort of combat. The critical battle of the Nine Years War had been lost. In a few years O'Donnell would be dead, O'Neill in exile on the continent, and the power of the Gaelic chiefs in Ireland would be a thing of the past. 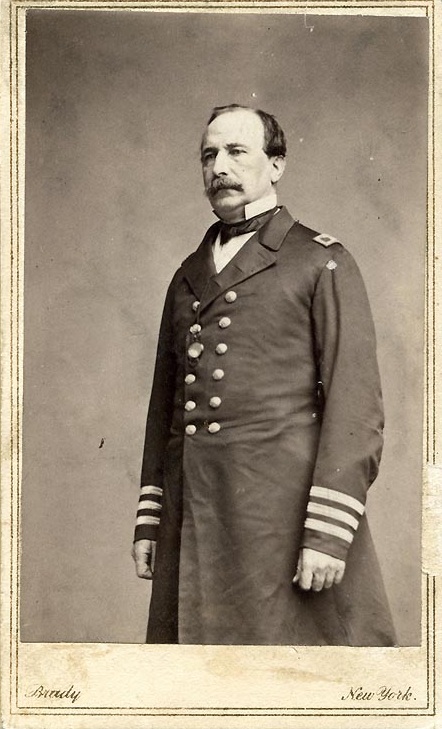 CÉADAOIN -- On Dec. 25, 1808, Stephen Clegg Rowan who would serve in the U.S. Navy during the Civil War and later be promoted to admiral, was born in Dublin. Rowan immigrated to America with his family in 1818, settling in Ohio. He joined the U.S. Navy in 1826, and by 1837 he had been promoted to Lieutenant. Rowan served as the executive officer on the Cyane, off the coast of California during the Mexican War.

He commanded several detachments of sailors and marines in shore actions, including the recapture of Los Angeles. Rowan was in command of the Pawnee at the beginning of the Civil War and was credited with directed the first naval shot of the war during the efforts to end the Confederate blockade of the Potomac River. He also commanded the first amphibious assault of the war, which captured Alexandria, Virginia. Rowan commanded a squadron during Gen. Ambrose Burnside

's operations in North Carolina, during the capture of Roanoke Island. By mid-July 1862, he was promoted to Commodore. During operations against Charleston in 1863, his ship, New Ironsides, was hit over 150 times. For much of 1864 Rowan commanded all naval forces in North Carolina. When the war ended, Rowan's career in the Navy continued to flourish; he was promoted to Rear Admiral in 1866 and Vice-Admiral in 1870. He retired from the navy in 1889 and died near Washington, D.C. in 1890.

CÉADAOIN -- On December 25, 1832, Thomas A. Smyth, one of the finest Irish-born Union generals of the American Civil War, was born in Ballyhooley, Co. Cork. Smyth worked on his father's farm in Ireland until 1854, when he immigrated to the U.S., settling in Philadelphia. He worked in his uncle's carriage business for a while but the young man's thirst for adventure led him to join in William Walker's revolutionary excursion into Nicaragua. He survived that escapade and returned to the U.S., moving to Delaware and once again working for his uncle. When rebels fired on Fort Sumter, Smyth did not hesitate -- he raised a company that joined the Irish 24th Pennsylvania Volunteer Infantry. The regiment saw little action, and when the regiment mustered out after 3-months, Smyth was not satisfied that he had yet done his part in the war. He got an appointment as major in the newly formed 1st Delaware Volunteer Infantry. The 1st Delaware would eventually join the 2nd Corps of the Army of the Potomac, arguably the hardest fighting corps in that army's history. The 1st was mauled at Antietam

Byrnes returned in May and Smyth moved to command of the 3rd Brigade of the 2nd Corps, but during his command of the Brigade he won the admiration and respect of many in its ranks. Smyth finally got a long-deserved star in September, as he was promoted to Brigadier General for his gallant performance at Cold Harbor. During the Petersburg campaign, Smyth was in command of a division at various times through the final days of the Appomattox campaign, including April 7, 1865, at the battle of Farmville. During the fight Smyth was shot through the mouth by a Confederate sniper. Smyth held on for two days, finally dying on April 9, the same day Lee surrendered. He was the third officer who had commanded the Irish Brigade to die in combat. An Irish enlisted man had been the first soldier killed in the Civil War and Irish-born Thomas Alfred Smyth was the last Union general killed during that long, bitter struggle. Truly the Irish had given the last full measure of devotion to their adopted land. AOINE -- On December 27, 1969, Dan Breen, one of the most famous IRA leaders during Ireland's War of Independence, died in Dublin. Breen was born in Grange, Donohill, Co. Tipperary, on Aug. 11, 1894. He joined the Irish Republican Brotherhood in 1912 and the Irish Volunteers in 1914. Breen took part in the ambush at Soloheadbeg, Co. Tipperary, commanded by Sean Treacy on Jan. 21, 1919, often considered the start of the war. Breen was involved in several famous incidents during the war. On May 13, 1919, he took part in the rescue of Sean Hogan near Knocklong, Co. Limerick. Sean Treacy was once again in command as he, Breen and Séamus Robinson boarded a train on which RIC officers were transporting Hogan. In the ensuing shootout, two policemen were killed and both Treacy and Breen were seriously wounded, the first of four times that Breen would be wounded in the war, but they succeeded in freeing Hogan.

After the war, Breen supported the Republican side and was arrested and held in Limerick prison for several months, but was released after going on hunger strike. He won the seat from Tipperary in the Dáil and was the first anti-treaty TD to take his seat in 1927, but he lost it in the election later that year. He moved to the United States for a short time during the Prohibition era and reputedly ran a speakeasy, but returned to win back his seat in the Dáil for Fianna Fáil. He would hold it from 1932 to 1965. He published his account of the war, "My Fight for Irish Freedom," in 1924. After his death, his body was returned to Tipperary and buried in Donohill with an estimated 10,000 mourners in attendance.

"Treacy had stated to me that the only way of starting a war was to kill someone, and we wanted to start a war, so we intended to kill some of the police whom we looked upon as the foremost and most important branch of the enemy forces ... The only regret that we had following the ambush was that there were only two policemen in it, instead of the six we had expected..."
-- Dan Breen on the Soloheadbeg ambush.

22, 1691 - Patrick Sarsfield and 'The Wild Geese" sail out of Cork harbor for France.
22-7, 1796-97 - French invasion fleet, with troops and Tone on board, in Bantry Bay, Co. Cork; landing prevented by bad weather.
22, 1944 - At Bastogne, Belgium during WWII's "Battle of the Bulge," Brigadier General Anthony McAuliffe of the U.S. 101st Airbrone gives the Germans his famous "Nuts!" reply to their demand for his surrender.
23,1688 - James II flees England for France.
23, 1920 - The British Parliament passes the Government of Ireland Act, which would be used to establish the 6 county parliament at Stormont.
24, 1591 - 'Red' Hugh O'Donnell escapes from Dublin Castle.
24, 1601 - Battle of Kinsale.
24, 1691 - Act of British Parliament bars Catholics from public office in Ireland.
24, 1889 - Capt. William O'Shea files for divorce, naming Parnell as co-respondent.
25, 1824 - William Lawless, United Irishmen and officer in Napoleon's Irish Legion, dies in Paris.
25, 1916 - Irish prisoners interned at Frongoch are released.
25, 1920 - Major John McKinnon, commander of H Company of the Auxiliary Division of the RIC kills Irish Volunteers John Leen & Maurice Reidy in Ballymacelligott, Co. Kerry.
27, 1849 - James Fintan Lalor, Young Irelander, dies.
27, 1904 - Opening of Abbey Theatre, Dublin
27, 1920 - Crown Forces surround an Irish Volunteer fund raising dance at Caherguillamore House, near Bruff, Co. Limerick. Five Volunteers and one Black & Tan were killed and over 120 Volunteers were captured.
27, 1969 - Dan Breen, IRA leader during War of Independence, dies.
28, 1918 - Sein Fein wins 73 of 108 seats in all-Ireland election.
28, 1918 - Countess Markievicz declared to be the first woman elected to the House of Commons.