This Week in the History of the Irish: August 28 - September 3 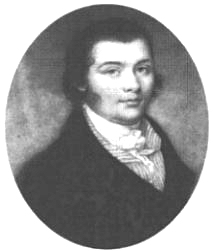 LUAIN -- On August 29, 1803, Samuel Neilson, one of the founders of the United Irishmen, died in Poughkeepsie, New York. The son of a Presbyterian minister, Neilson had made a fortune in business by 1790, then he dedicated himself to Irish politics. It was Neilson, a native of Ballyroney, County Down, who first proposed the idea of the organization that eventually became the United Irishmen. He edited a republican paper, the Northern Star in 1792, and in 1796 he was imprisoned by the British for those activities. He was released by reason of bad health in February 1798 on condition that he refrain from republican activity but he violated that condition almost immediately. He was helping Lord Edward Fitzgerald organize for the rising in Dublin when Fitzgerald was arrested in May. Neilson then went to Newgate prison, where Lord Edward was being held -- some say to evaluate the chances for a rescue, others say he was intoxicated. In either case, Neilson was captured himself and was badly hurt as he struggled to escape. Neilson was one of the lucky few of the United Irishmen who avoided execution. He was held in Scotland for three years and then deported to the Netherlands. Neilson emigrated to the United States in 1802 and planned to start a newspaper in Poughkeepsie, but he died suddenly on August 29, 1803.

CÉADAOIN -- On August 31, 1767, Henry Joy McCracken, leader of the United Irish rising in Antrim, was born in Belfast. McCracken was running a cotton factory by the age of 22. He and Thomas Russell organized the first Society of United Irishmen in Belfast in 1791. He was imprisoned for 13 months in 1796 but as soon as he was out on bail he began planning for the ’98 rising in Antrim and was appointed the leader of the rebel forces there.

Though many of the northern United Irishmen failed to rise up when the time came, Henry Joy honored his pledge and led a brief rising that was crushed at Antrim town. He escaped for a time and nearly managed to leave the country but he was captured and quickly found guilty. Henry Joy McCracken was hanged at Belfast market-house on June 17, 1798. DEARDAOIN -- On September 1, 1864, Irish patriot Roger Casement was born at Sandycove, County Dublin. Casement joined the British colonial service and was knighted in 1911 for his work on behalf of African and South American native workers who were being exploited by whites. Leaving the colonial service in 1912, he became involved with Irish nationalism, joining the Irish Volunteers. In 1916, Sir Roger traveled to Germany and arranged German assistance for the Easter Rising. He traveled back to Ireland by submarine, convinced by then that the Rising could not succeed but that he must join his comrades. He was captured at McKenna's Fort soon after landing on the southwest coast. Casement was later tried in England. To lessen the protests over his expected death sentence the British circulated small parts of his so-called Black Diaries which purported to reveal his alleged homosexual activity while in colonial service. Recent evidence points to a possibility that these diaries were forged by British intelligence to lessen worldwide condemnation of Casement's execution. Sir Roger Casement was hanged at Pentonville Prison on August 3, 1916. In 1965 Casement's body was returned to Ireland, where he was given a funeral on March 1that rivaled that of O'Donovan Rossa. Eamon de Valera, 82 years old and feeling poorly, insisted on attending and gave the graveside oration at Glasnevin Cemetery, Dublin. Casement had returned to Ireland in 1916 to share his comrades' fate -- 49 years later he was finally able to rejoin them one last time.

SATHAIRN -- On September 3, 1842, John Devoy, (in a prison photo, left) one of the most devoted revolutionaries the world has ever seen, was born in Kill, County Kildare. John showed his commitment to Irish freedom early, refusing to sing 'God Save the Queen' in school at the tender age of 10. He was a faithful Fenian at 18 and later led Fenian recruitment among Irish soldiers of the British army. In 1866 he was arrested and sentenced to 15 years but was released during the '71 amnesty, on condition he leave Ireland. Moving to America he worked as a journalist and joined Clan na Gael which had become the leading Irish-American ally of the Irish republican movement. Devoy was soon its leading member. His greatest early success was the freeing of six Fenians from a penal colony in Australia on the whaling ship Catalpa and he accomplished much through his cooperation with the land reform movement in Ireland. He also became involved with numerous large and small disputes within the organization and saw it through a low period in the late 19th century. Through Devoy, Clan na Gael helped finance many Irish causes, culminating with the group's support of the Easter Rising and the War of Independence. He visited the Free State in 1924 and was given a well-deserved hero's welcome by the government and the people of Ireland. Few men have sustained their revolutionary zeal into their 80s as did Devoy. John Devoy died in Atlantic City, N.J., on September 29, 1928, having sacrificed his entire life for Ireland.

1, 1701 - Irish Brigade of France fights at the Battle of Chiari in northern Italy during the War of the Spanish Succession.
1, 1862 - Irish American Union General Philip Kearny is killed at the battle of Chantilly, VA.
1, 1862 - Irish 6th LA fights at the battle of Chantilly.
2, 1939 - Ireland declares its intention to remain neutral in coming war.
2, 1942 - IRA Volunteer Tom Williams is hanged at Belfast's Crumlin Road Jail.
3, 1741 - Irish-born Gen. Peter Lacy commands a Russian army which routs the Swedes at Wilmanstrand.
3 - Oct. 28, 1779 - Dillion's Regiment of the Irish Brigade of France takes part in the siege of Savannah.