This Week in the History of the Irish: April 8 - April 14 LUAIN -- On the monrning of April 9, 1916, a German merchant ship, the Aud, had just left the port of Lübeck, loaded with guns and ammunition for the Irish Republican Brotherhood

MÁIRT -- On April 10, 1923, General Liam Lynch, chief of staff of the Irish Republican Army, was mortally wounded by Free State troops in Tipperary. Born in Limerick, Lynch commanded the Cork No. 2 Brigade

DEARDAOIN -- On April 12, 1816, Charles Gavan Duffy (right) was born in County Monaghan. Self-educated as a journalist, Duffy would found the Nation, a nationalist weekly journal, along with Thomas Davis 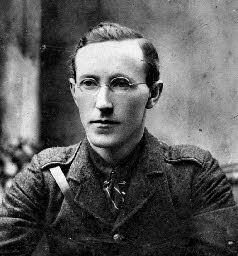 8, 1886 - Home Rule Bill introduced in English Parliament by Gladstone
9, 1812 - The Hibernia regiment of Spain and Napoleon's Irish Legion face each other at Badajoz during the Peninsular War.
9, 1916 - The Aud leaves Germany for Ireland with arms for the IRB.
9, 1921 - Dr. William Walsh (archbishop - nationalist) dies.
9, 1984 - Leslie De Barra, revolutionary, wife of General Tom Barry, dies.
10, 1808 - War Minister, Gen. O'Farrill, becomes a member a ruling junta in Spain.
10, 1918 - British Parliament proposes conscription in Ireland.
10, 1923 - Liam Lynch, chief of staff of the Irish Republican Army, mortally wounded by Free State troops in Tipperary.
10, 1981 - Bobby Sands elected to Parliament for Fermangh while on hunger strike.
10, 1998 - Mitchell Agreement for NI is signed by all parties to the talks.
11, 1912 - The “Addergoole 14” board the Titanic in Cobh, County Cork.
12, 1847 - The American relief ship, Jamestown, lands supplies in Cork for victims of the Great Hunger

.
12, 1916 - Roger Casement sets sail from Germany to Ireland aboard the German U-boat U-20.
13, 1778 - John Paul Jones sails into Belfast harbor and captures the H.M.S. Drake.
13, 1811 - Stephen Moylan, cavalry commander in the American Revolution, dies in Philadelphia.
13, 1918 - Kerry Volunteers raid the RIC barracks at Gortatlea. Some arms are captured but two Volunteers are killed. Some consider it the first action of the War of Independence.
14, 1794 - George Arthur Dillon, Irish Brigade of France officer, guillotined in France.
14, 1916 - The U-20 returns to land with mechanical problems, and Roger Casement transfers to the U-19.
14, 1919 - Limerick Trades Council declares a general strike.
14, 1920 - “Miltown Massacre,” RIC and Black & Tans attack a crowd celebrating the release of Republican hunger strikers, killing 3 and and wounded seven others, two of them school children.
14, 1922 - IRA occupies the Four Courts in Dublin.