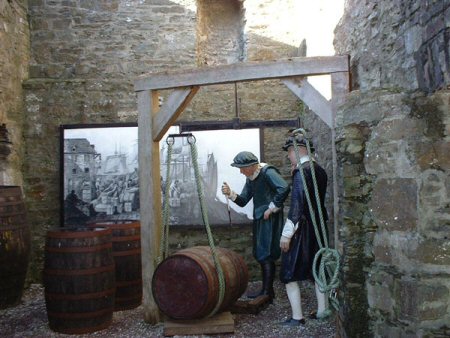 Many have heard of "The Wild Geese," those Irish rebels who fled Ireland for many other lands, including France, beginning after the defeat of James II in 1691 and continuing for some hundred plus years after that. Their contributions to the armies of France from the 1690s through to the time of Napoleon were enormous, most notable of these being their breaking of the English line for Louis the XV's army at the Battle of Fontenoy in 1745. But did you know they also made contributions to the wine industry of France? Many of these Irishmen arrived with money in their pockets and became high ranking officers in the Irish Brigade of the French army. One of the places they invested that money was in vineyards.

The Lynch family, from Galway, started a winery in the Bordeaux region. The famous Dillon family, of Mayo and Roscommon, who were hereditary commanders of Dillon's regiment of the Irish Brigade had a winery, as did the Clarke family of County Down, both in the Bordeaux region. Some others became involved with wineries in North America and Australia.

Recently, the descendants of these so called "Wine Geese" returned to Kinsale, Co. Cork, to be honored at the opening of the International Museum of Wine at Desmond Castle. The ceremony began with the delivery of a cask of wine on a Bantry long boat to the Kingston Marina, where it was then transported to the castle.

Among those present was Francis O'Mahony, whose Napa Valley (California) wine was recently served at the White House, and the 11th Marquis de Goulaine (descended from the Galway-O'Briens) of the Chateau de Goulaine, near Nantes.

The International Museum of Wine at Desmond Castle is open weekly through September. Anyone wanting more information can contact the Museum at 011-353-21-774855.

WHO WERE THE JACOBITES?

Readers of Irish history are bound to come upon the term "Jacobite" over and over in reading of Ireland's struggles during the late 17th to mid 18th centuries. So who exactly were the Jacobites?

The term Jacobites comes from Jacob, the Hebrew word for James. The Jacobites were followers of King James II of England, his son, known as James the "Old Pretender," and the "Pretender's" son, Charles, who is known to history as "Bonnie Prince Charlie." Their line to the throne, the Catholic Stuarts, was deposed from the throne of England in 1688 by the so called "Glorious Revolution," when William of Orange, of the Netherlands landed in England with his army and was greeted as a liberator by the mainly Protestant English population.

Though James was a Catholic, Protestants in England had hope that his successor would be a Protestant. The birth of a son in June 1688 put an end to those hopes and set the stage for William's triumphant march into England. James was easily defeated by William in England and then later, with more difficulty, in Ireland at the Battle of the Boyne in June 1690.

Through the years after that, until Culloden Moor in 1745, the Jacobites, mostly Scottish. and Irish with some English, plotted the return of the Stuarts to the throne of England. Their two serious attempts to retake the throne were in 1715 and 1745. The 1715 revolt, under James the "Old Pretender," was never close to success; however, the 1745 revolt, under "Bonnie Prince Charlie," came very close to success.

The 23-year-old Charles Edward Stuart was, at one point, only 120 miles from London with his army of Highlanders and Irish supporters; little English opposition stood between he and his object following several victories in Scotland. At that point "Bonnie Prince Charlie" received a false report that a large English army was approaching and he and his advisor's decided they had no recourse but to retreat to Scotland.

With Lord Cumberland and an English army following them, they began their long retreat to Scotland. Finally, after a harsh winter camped at Stirling, the Jacobite army met their English foes at Culloden on April 16, 1746. The devastating defeat suffered by the Jacobites that day is one of the most famous battles in history. It marks the effective end of the Jacobite cause and the end of the power of the Scottish Highlanders as well. Over the next few years the English cleared the Highlanders off their lands, which were said to be more profitable for raising sheep.

A good many of those Highland families ended up in America, as did many of the Irish and Scotch-Irish Jacobites. Though they could not again take up the Jacobite cause, they and their sons and daughters would be among those most eager to answer the call when the Liberty Bell rang in Philadelphia. England would pay a price for Culloden Moor in the end.