What's in a name? For me it meant finding a deep connection to my Irish roots.  I have an uncommon name, Honora, which elicits questions such as what kind of name it is, how to pronounce it and where does it come from.  My mother named me for her mother, who was also named for her mother.  Although Honora is Latin for "honor" the "H" is not silent.  It rhymes with Lenora.  Last year my mother's sister asked me to research our family tree and I found that my name went back even further than my great-grandmother and came from a country I had no idea was in my ancestry.  I found my great-grandmother Honora's father, Arthur John Potter, born in 1874 in Louisville, Kentucky.  Then I found his parents:  William Potter and Honora Casey, both born in Ireland.  William in 1840 and Honora in 1845.  My sister and I both did the DNA test from ancestry.com and found our DNA markers were 35% Irish, which was backed up by finding more ancestors,  also born in Ireland, on both sides of my family.  Growing up my mother told us we had Italian and German ancestry on her side.  She had no idea about the Irish.

When I first began my family tree I was more concerned with filling in the blanks with names and dates of birth and death but I kept coming back to "the first Honora", as I began calling her, and I wanted to find out everything I could about the woman who would pass down her name to me. The search, over the phone and the internet, took me to Louisville, Kentucky.  I called the Louisville Diocese, the Louisville Free Public Library, Catholic Cemeteries, Louisville Archives and Records and other business' in my quest to learn about my ancestors.  I read books on Irish history like "The Graves are Walking" and "Under the Hawthorne Tree" to try to understand the time they lived.  During my research I learned that genealogy is more than names and dates, it's the history of who you are and where you come from.  I have always been a history buff and now I am learning my own history.  I have found Honora and William on every census from 1870 - 1920, their marriage bond, death certificates, the naturalization record for William and obituaries.  I have found so much information on them I feel I know everything about them but what they looked like.

Honora was born May 2, 1845 just months before the potato blight hit Ireland.  Her parents were Cecelia Thornton and John Casey.   On the 1900 census Honora lists 1854 as the year she immigrated to America, when she was only 9 years old.   William was born September 9, 1840 to Nora Concannon and Arthur Potter.  On the same census he lists 1860 as the year he immigrated.  After they immigrated the first record I find of them is their marriage bond, dated the day before their marriage,  May 9, 1863. 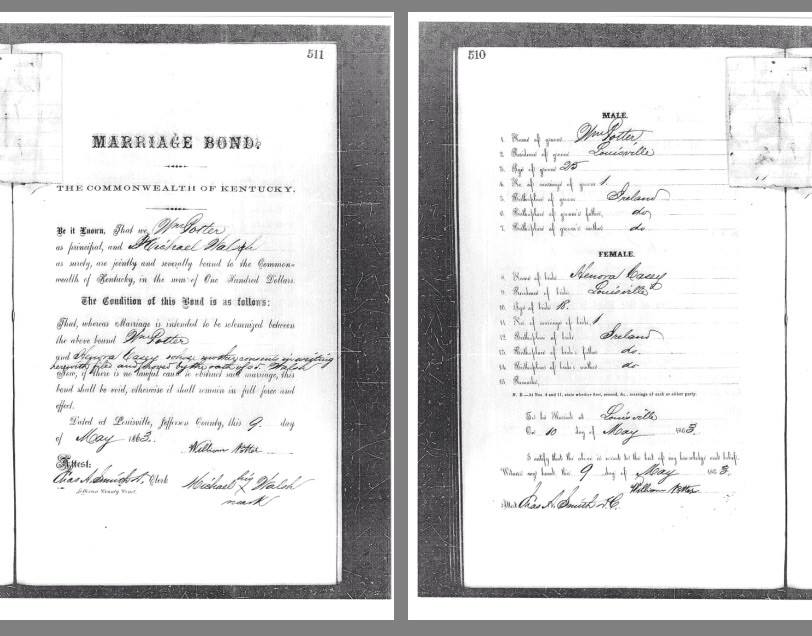 I requested a copy from the Louisville Archives and Records and was surprised to find a copy of a handwritten note attached to the record.  It appears to have been written by the court clerk for Honora's mother, Cecelia,  giving permission for William Potter to marry her daughter.  It is signed with an "x" with "her mark" written next to it and someone signed her name.  It is witnessed by Michael Walsh and Tom O'Brien, both names next to an "x" with "his mark" and someone signed their names.  On the 1920 census Honora answered she could speak English, but not write it and that hers and her parent's native tongue was Irish.  I believe that it is possible that in the note Cecelia, Michael and Tom were not illiterate but that they were native Irish speakers/writers.

In the mid 1800's it was standard for fathers, or in his absence an older brother of the bride, to give permission for their daughters to marry.  Since Honora's father, John Casey, does not appear on the marriage bond or note I believe he had either never immigrated to America or had died by the time Honora married.  The only document I find his name is on Honora's death certificate.  Cecelia was either 15 or 16 when Honora was born, making it likely Honora was the first born and does not have an older brother.  I have not yet found any siblings for her.  Michael Walsh and Tom O'Brien may be relatives or close friends to sign and witness such an important document.  Over the next 21 years Honora and William had 10 children, seven daughters:  Mary, Annie, Cecelia, Mollie, Katie, Rosa Agnes and Bessie and three sons:  Arthur John, John and William Jr.  On the census' and death certificate for William it lists his occupation as "grocer" or "grocer drummer" and the obituary for their daughter Cecelia  in 1902 refers to William as "the well known salesman".   Honora's occupation was always listed as "housewife".

Honora's mother Cecelia appears on the 1870 census in the household of her son-in-law and daughter.  I have not found her on any other census.  She died January 30, 1895 and is buried at St Johns Cemetery in Louisville.   I have found her obituary and her mortuary report (prior to 1911 Kentucky didn't require a written record of death and a mortuary report was a handwritten entry in a log book), both listed her age at death as 66 which meant she was born in 1829, but I didn't have a full date of birth.  I called the Catholic Cemeteries in Louisville and their records also only had her age as 66 years old.  They did provide me with the name of the company who did her funeral service: Keenan and Dougherty.  115 years after Cecelia's death I was amazed to find they were still in business.  I called and explained to the woman I was looking for any information they may have.  She said she didn't know if they would still have the record but she'd look and call me back.  A few days later she called and said they didn't have a birth date but there was a handwritten itemized list of the cost of her funeral and would I be interested in a copy of that?  Of course!  Between the obituary and the funeral record I know that Cecelia's service was at her daughter's house and a "five hack" carried her the few blocks to the cemetery.  Her funeral cost:  casket $75, hearse $5, five hack $15, candles $1, grave $5.  I still have not found her date of birth. 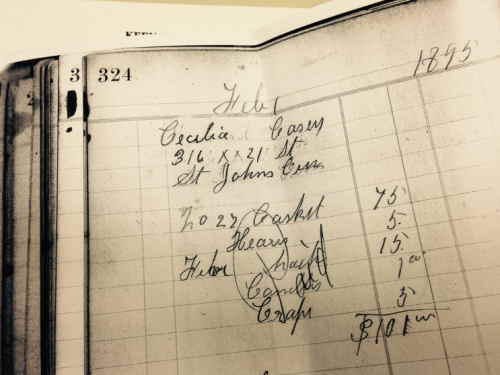 During my research I found that the Louisville Archives and Records have naturalization records dating back to the 1800's and the records are listed alphabetically on their website.  I found two entries for "Wm Potter".  The naturalization records were handwritten entries in a log book at the courthouse and I received a copy of the microfiche of the record.  The first record is the "intent to become a citizen" and states :

Thursday June 4 1874 Court _____ Present Hon MB Hoke Judge This day came Wm Potter a native of Ireland and produced and filed in court his petition praying to be admitted a citizen of the United States of America said petitioner would most respectfully state that he was born in Ireland that he immigrated to the United States of America in the year 1858 and landed at New York in the state of NY in the year 1858 that he is 34 years of age that he has resided in the City of Louisville KY about 12 years last past that it is and been for three years last past bona fide his intention to become a citizen of the United States of America and absolutely and entirely to renounce and adjure all allegiance and fidelity to any and every foreign Prince Potentate State or Sovereignty whatever and particularly to Victoria Queen of Great Britain and Ireland to whom he now holds allegiance. The second record granted him citizenship:

1877 This day came Wm Potter and produced and filed in Court his declaration to become a citizen of the United States in the city of Louisville on the 4th day of June 1874 and thereupon came Frank Roberts who made oath as required by law and thereupon Potter took the oath as required by General Statutes Whereupon he was admitted and declared to be a citizen of the United States of America. MB Hoke

Between the 1800's cursive, lack of punctuation and use of words like "potentate" I had a little difficulty the first time I read the naturalization records but I felt like I had found a treasure!  My 3rd great-grandfather had survived The Great Hunger and a "coffin ship" and was now an American citizen and had conferred citizenship to his wife, Honora.  Curiously, the naturalization record says he immigrated in 1858.  The 1900 census said 1860.  I don't know if William said 1858 in the naturalization record to speed up the process (to show he had been in America longer) or if in the years between his immigration and the 1900 census his memory became a little foggy.

The last two pieces of information I'm still searching for are the name of the ship and exact date of immigration for Honora and William and where in Ireland they are from.  The National Archives and Records Administration in Washington DC have ship manifests dating back to 1820 on microfiche and hopefully I will find them on a manifest.   I plan to make a trip to Louisville soon to do some research at the Louisville Free Public Library and I hope in their records, that have not yet been transcribed on-line, I will find their home in Ireland.  William died February 10, 1914 and Honora died December 21, 1921.  They outlived three of their 10 children and are buried together at St Louis Cemetery in Louisville.  While I'm in Louisville I will visit their grave I have always wanted to visit Ireland and now I understand why I have felt such a pull to a place I have never been.  It's my ancestors whispering to me.  It's in my blood.  Today when someone asks me about my name I tell them "It came from Ireland, with my 3rd great-grandmother".

Comment by Honora Wright Weaver on October 2, 2015 at 5:47pm
I've kept at my research and with some help I have a record of baptism for William Potter's younger sister, Anne, in Donaghpatrick, Galway in April 1844. It appears likely that Honora's mother, Cecelia Thornton, is also from Galway. I also found that Honora had a younger sister, Mary Casey Kenney, 1848 - 1914. Persistence pays off.